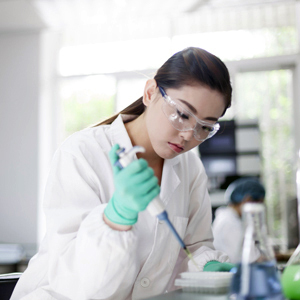 In the last year, research conducted and supported by the NICHD shed new light on the causes of and potential treatments for a number of birth defects.*

Osteogenesis imperfecta (OI) is a genetic disorder characterized by fragile bones that break easily. Until recently, scientists did not fully understand the mechanisms by which OI causes bone problems.

Researchers supported by the NICHD learned that high levels of a protein called transforming growth factor beta (TGFβ) in mice can produce the same bone problems as those found in OI. The researchers believe that TGFβ signaling may be a target for OI treatment in the future.

Gordon syndrome (GS), or distal arthrogryposis (DA) type 3, is a rare genetic disorder characterized by cleft palate and shortened hands and feet. There are several types of DAs, but they all involve some type of joint contracture, meaning one or more joints are permanently fixed into a bent or straight position. This year, NICHD-supported researchers found mutations in the PIEZO2 genes of several families whose members have GS.

People with GS often experience the same symptoms as people who have another type of DA—DA type 5 (DA5)—and a disorder known as Marden-Walker syndrome (MWS). The three have always been considered separate disorders, but when the researchers screened the genes of people with DA5 and MWS, they found the same genetic mutations as found in people with GS. This suggests that the three disorders are related and may actually be different forms of the same condition.

Cornelia de Lange Syndrome is a genetic disorder that can cause a range of physical and cognitive issues, including malformed or missing limbs. The condition results from a deficiency of the protein called Nipbl, but exactly how this deficiency caused the disorder was unknown until recently.

Researchers supported by the NICHD used zebrafish and mouse models to learn how lowering levels of Nipbl can produce limb defects. They learned that suppressing Nipbl in both zebrafish and mice led to smaller and more malformed forelimbs. The scientists discovered many gene expression changes in both species, as well as altered expression of genes that may play a role in limb development. Decreased levels of Nipbl can affect key genes that regulate limb development, such as shha, hand2, and the members of the hox family of genes.

Freeman-Sheldon syndrome, also known as DA type 2A (DA2A), is typically considered the most severe of the DA syndromes. It can cause malformed feet and contractures of the hands and facial muscles. The syndrome affects different people differently, although scientists believe that all cases are caused by mutations in the MYH3 gene.

Supported by a grant from the NICHD, researchers performed genetic testing on 46 families with Freeman-Sheldon syndrome. They found MYH3 mutations in 93% of families. Three specific mutations—p.T1781, p.R672C, and p.R672H—accounted for 91% of these cases. Families with the p.T1781 mutation were the most severely affected by the condition.

To better understand how gene mutations influence this condition, the researchers suggest classifying families with DA2A into groups by severity. This classification might also provide an opportunity for more personalized medical management.

NICHD researchers working with mice have uncovered a potential clue to polydactyly—a birth defect involving extra fingers or toes. The researchers found a problem with one of the genes that makes the protein complex known as Endosomal Sorting Complex Required for Transport II (ESCRT-II) causes a version of polydactyly in mice. When ESCRT-II isn’t working properly, extra signaling proteins can build up on the surface of the cell.

“[The researchers] have discovered that an unexpected cellular pathway is involved in the generation of extra digits,” said Lorette Javois, Ph.D., of the NICHD’s Developmental Biology and Structural Variation Branch. “The findings expand what we know about genetic pathways involved in normal limb development and offer researchers a new direction in which to search for human mutations that result in extra fingers or toes.”

*The NICHD is aware that the term “birth defects” carries negative connotations and does not reflect the many abilities and talents of those affected by these problems. Communities are discussing alternative terms for describing these birth problems. Because no consensus has been reached, this article uses the term “birth defects” to describe health problems present at birth.