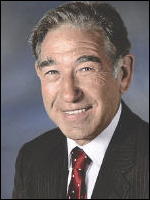 When the Institute celebrated the 40th anniversary of its founding in 2003, director Duane Alexander, M.D., initiated the NICHD Hall of Honor as a way to recognize NICHD-supported scientists whose achievements have been especially noteworthy. The inaugural class of the Hall of Honor included 14 outstanding honorees, ranging from basic scientists to behavioral scientists. The Honorees exemplify the science for which they are honored, as much as the common humanity that motivates all of us to serve others.

On January 24-25, 2007, the Hall of Honor will add Dr. Stanley Cohen to its distinguished ranks, for spearheading research that elucidated how cell growth and differentiation is regulated. His Hall of Honor panel will include the following citation: For his landmark discovery of epidermal growth factor and its cellular receptor, which play key roles in development and provide novel targets for chemotherapy.

After gaining research experience in the fields of pediatrics and biochemistry at the University of Colorado, Dr. Cohen moved to Washington University’s department of zoology. Through his research with colleague, Dr. Rita Levi-Montalcini, Dr. Cohen isolated nerve growth factor (NGF) and created antibodies that inhibited the growth factor’s activity.

He accepted his first teaching position in 1959 as assistant professor of biochemistry at Vanderbilt University. Over the next 35 years at Vanderbilt, Dr. Cohen made many significant discoveries as a grantee of the NICHD Endocrinology, Nutrition, and Growth (ENG) Branch.

Building on his pioneering work with Dr. Levi-Montalcini, Dr. Cohen discovered, isolated, purified, and sequenced epidermal growth factor (EGF), a protein that stimulates the growth of epithelial and other cells and enhances certain developmental growth cascades. Once the sequence was known, he was able to identify the target receptor for EGF and the mechanism of its action, providing a breakthrough in understanding how signals from outside a cell reach the inside of a cell.

These discoveries enabled scientists to further explore the cell growth process and provided new receptor targets for interventions, such as chemotherapy. Other biomedical advances that resulted from Dr. Cohen’s research include (up to 1999):

In 1986, Dr. Cohen and Dr. Levi-Montalcini earned both the Nobel Prize in Physiology or Medicine and the Albert Lasker Basic Medical Research Award for their discoveries related to growth factors. Dr. Cohen retired from the Vanderbilt faculty in 2000 as the Distinguished Professor Emeritus of Biochemistry.

Dr. Cohen’s Hall of Honor induction will occur in two parts—first, a dinner and ceremony on January 24 at the DoubleTree Rockville, and then a brief presentation during the January 25 meeting of the National Advisory Child Health and Human Development (NACHHD) Council on the NIH main campus. Dr. Cohen’s Hall of Honor panel will be installed in the Building 31 hallway in early February.