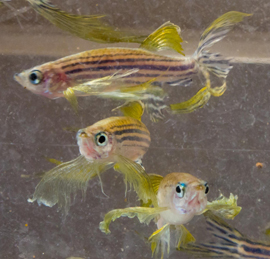 At first glance, it’s hard to see many similarities among people, mice, and zebrafish. But much of what we know about the earliest stages of human development and birth defects* come from studying the development of these animals.

How can research on “animal models” apply to people?

“The simple answer is because of evolution,” said Lorette C. Javois, Ph.D., from NICHD’s Developmental Biology and Structural Variation Branch.

Humans and animals share common ancestors from millions of years ago. Over time, as animals and humans took different evolutionary paths, their DNA maintained similarities. The closer two animals are on the evolutionary path, the more similar their genomes. For example, the human and mouse genomes are about 90% the same, while we have only about 70% of the same genetic material of a zebrafish.

Why use animal models in research on human development?

Animal models provide something that other research methods cannot. “Even the most sophisticated technology cannot mimic the complicated interactions that occur among cells, tissues, and organs in humans and animals,” Dr. Javois said. “Learning more about these interactions helps us understand the basic processes of life. It also allows us to better understand what happens when things go wrong, and that knowledge lays the foundation for advances in disease diagnosis, treatment, and prevention.”

Animal models also are easier to use in research than humans. Animals generally reproduce in greater numbers and have shorter lifespans, so researchers can study more animals—and multiple generations—in a shorter period of time.

How do researchers choose which animal model they want to use?

Researchers choose model organisms in large part based on how easily they can be used in the laboratory. Among the factors researchers consider are:

These are a few of the most common animal models:

What have we learned about human development and birth defects from animal models?

Animal models have taught us a great deal about human development and birth defects. For example:

In addition to conducting research with existing animal models, scientists also are developing new animal models. For example, researchers supported by the National Institute of Neurological Disorders and Stroke have developed a new method for studying neural tube closure in mouse embryos. This animal model could help researchers better understand how neural tube defects arise in people and identify new strategies for intervention.

Animal models will continue to play an important part in research on human development, as scientists work to find ways to prevent birth defects and treat them when they occur.

*We know that the term “birth defects” carries negative undertones and does not reflect the many abilities and talents of those affected by these conditions. Communities are discussing alternative terms but have not yet reached a consensus.