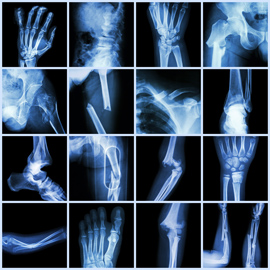 NICHD researchers, along with colleagues from Thailand and Switzerland, discovered a form of osteogenesis imperfecta, or brittle bone disease, resulting from a gene defect on the X chromosome. The finding adds another gene to a growing list known to cause the disease. The study results are expected to yield new insights that may one day lead to treatments for the rare, frequently debilitating disease. The study was published online recently in Nature Communications.

Osteogenesis imperfecta (OI) is a rare genetic disorder affecting the protein collagen, which is found in bone, teeth, skin, and tendons. People with the disorder have bones that can break easily, often from a mild impact or for no apparent cause. The disorder results from mutations, or changes, in the genes that contain the information needed to make the collagen, known as COL1A1 and COL1A2. The disorder may also result from changes in genes that determine the shape and configuration of the collagen molecule. Depending on the gene involved, the disorder can range from mild to severe, and may even be fatal. In mild forms, bones may break only a few times in a person's life. People with severe forms of osteogenesis imperfecta may have hundreds of bone fractures in their lifetimes. Before the current study, all of the known forms of osteogenesis imperfecta were found to arise from genes on the autosomal, or non-sex, chromosomes. In the last decade, research conducted at the NICHD and elsewhere determined that defects in numerous recessive genes could result in OI. The current study identified the first gene on a sex chromosome that could cause OI and also provided information on how the genetic defect results in impaired bone formation.

The researchers found mutations in a gene known as MBTPS2 in 2 families and identified a total of 14 patients. Each family had a unique variant of the gene. Individuals with a mutation in the gene develop fractures of the limbs and ribs, bone before and after birth, a chest deformity, short stature, and curvature of the spine (scoliosis). Because males have only one X chromosome, only males were affected. Because females have two copies of the X chromosome, women and girls in the family who carry the mutation had one fully functioning copy of the gene and so were not affected. MBTPS2 contains information needed to make a protein called S2P (site-2-protease). The investigators found that mutant S2P undermines bone strength.

S2P works inside cells, together with a related protein, S1P (site-1-protease) are critical components of a process called Regulated Intramembrane Proteolysis (RIP). RIP influences bone metabolism and also is involved in cholesterol metabolism. In fact, other mutations in MBTPS2 cause a rare sterol disorder affecting skin and eyes, IFAP syndrome. The X-linked OI mutations show that RIP is also critical for bone. The study authors hope that efforts to understand the role that MBTPS2 plays in collagen formation and sterol metabolism will one day yield treatments for both conditions.