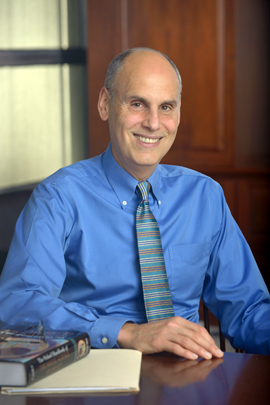 “Alan possesses a rare combination of brilliance, impeccable scientific acumen, a lightning-quick wit, and an inspiring sense of humanity,” wrote NIH Director Francis S. Collins, M.D., Ph.D., in a statement. “I am truly sorry to see him retire from NIH, but I am deeply grateful for his enormous contributions to this agency and to advancing medical research.”

Catherine Y. Spong, M.D., who currently serves as NICHD’s Deputy Director, will become acting director beginning October 1, 2015. Dr. Spong has held several leadership positions during her 20-year career at NICHD, including director of extramural research and chief of the pregnancy and perinatology branch. She is an internationally recognized researcher and board-certified in obstetrics and gynecology and maternal-fetal medicine.

Dr. Guttmacher was appointed as NICHD Director in 2010, after serving as the institute’s acting director the previous year. Among his many accomplishments, he championed the development of a scientific vision for the institute, soliciting the advice and counsel of scientists and public health experts from several disciplines to identify the most promising scientific opportunities across NICHD’s mission areas. He also launched the Human Placenta Project, a collaborative research initiative aimed at improving the understanding of the placenta and its role in health and disease.

Dr. Guttmacher began his NIH career as a special assistant to then-director of the National Human Genome Research Institute (NHGRI), Dr. Francis Collins. He became deputy director of NHGRI in 2002 and acting director in 2008.

Among Dr. Guttmacher's areas of expertise is the development of new approaches for translating genomics into better ways of diagnosing, treating, and preventing disease. He came to NIH from the University of Vermont, where he directed the Department of Pediatrics’ Vermont Regional Genetics Center and Pregnancy Risk Information Service. He also served as the medical director of the Vermont Newborn Screening Program, founded Vermont’s only pediatric intensive care unit, and co-directed the Vermont Cancer Center’s Familial Cancer Program.

During his retirement, Dr. Guttmacher plans to move back to Vermont with his wife and remain active in issues of reproductive health and children’s wellbeing.