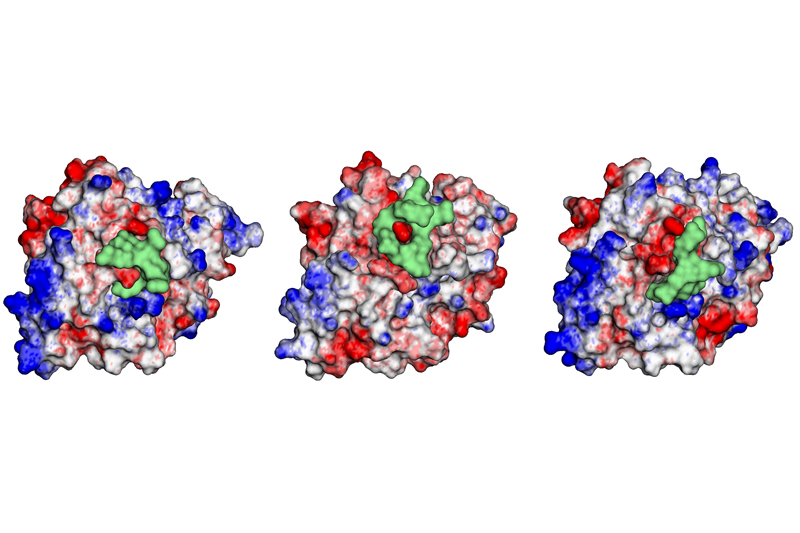 Small compounds called cyclic peptides can block the activity of a protein that is found in the testes and is essential for making healthy sperm, according to a recent study from NIH’s Eunice Kennedy Shriver National Institute of Child Health and Human Development (NICHD), in collaboration with the National Institute of Allergy and Infectious Diseases (NIAID). The researchers designed several peptides against a specific area of the protein GRTH. With more research, these compounds could potentially serve as a non-hormonal contraceptive for men. The findings appear in the Journal of Medicinal Chemistry.

Men have limited contraceptive options, namely condoms or sterilization. Researchers are looking for new and better methods, including reversible drug therapies. The Dufau Lab at NICHD studies GRTH, which serves several functions that enable germ cells to eventually become sperm. The lab made a series of discoveries that suggest targeting GRTH could potentially serve as a non-hormonal male contraceptive.

In the latest study, researchers led by the Dr. Maria L. Dufau (NICHD), in collaboration with Dr. Sergio A. Hassan, Bioinformatics and Computational Biosciences Branch (NIAID), designed compounds that target an important site of GRTH that is phosphorylated by an enzyme called protein kinase A (PKA); phosphorylation is a tagging process that affects the activity of a protein. Blocking the interface where PKA interacts with GRTH could potentially impair GRTH activity and prevent the production of viable sperm.

To target this GRTH site, the study team focused on cyclic peptides because the site does not contain deep crevices that are typically used as binding sites for drugs or drug-like molecules. Cyclic peptides, which are made up of small, linked chains of amino acids, are usually less toxic than drugs and have the potential to target shallow protein surfaces. But it can be difficult to get these compounds inside a cell.

The researchers developed a panel of cyclic peptides that act as a binding competitor to PKA. The peptides can enter cells and seminiferous tubules in vitro and reduce the phosphorylation of GRTH in a dose-dependent manner. They also do not appear toxic in experiments conducted in cells.

The study is the first to develop rationally designed cyclic peptides that target GRTH. While the findings are preliminary, the results build upon years of research on GRTH in people and in animal models.

The team plans to test a series of cyclic peptides in mice. They will evaluate how these peptides work and look for changes in the following: GRTH phosphorylation in the testes, male reproductive organs, sperm count and mobility, fertility, mating behaviors in mice, and reversal of the compounds’ effect(s).