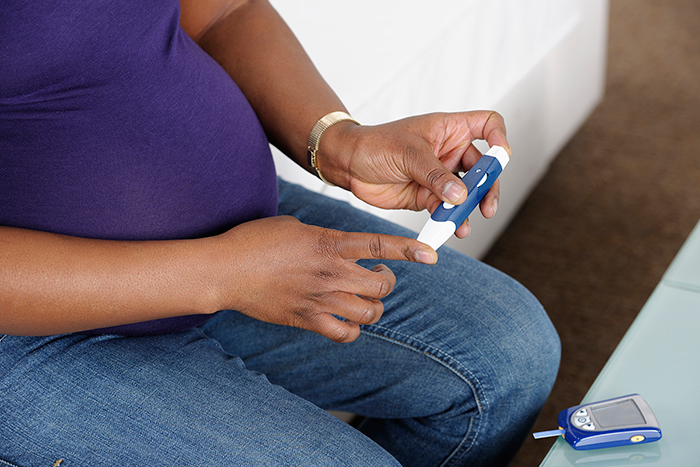 The excess body fat seen in infants born to women with gestational, or pregnancy-related, diabetes is associated with higher maternal blood sugar levels as early as the 10th week of pregnancy—long before the time when women are usually screened for the condition, according to a study by researchers at the National Institutes of Health. Moreover, weight gain in the fetuses of women with gestational diabetes first becomes apparent in the 28th week of pregnancy, when many women are first tested for the condition.

If the findings are confirmed, it could mean that women should be screened and treated for gestational diabetes as early as the first three months of pregnancy.

The study was led by Cuilin Zhang, M.D., Ph.D., of the Epidemiology Branch of NIH’s Eunice Kennedy Shriver National Institute of Child Health and Human Development (NICHD). It appears in The Lancet: Diabetes & Endocrinology.

Women who don’t have any symptoms of gestational diabetes are usually tested from the 24th to the 28th week of pregnancy, according to the U.S. Centers for Disease Control and Prevention.

The researchers also compared the early-pregnancy glucose levels of 101 women who were later diagnosed with gestational diabetes to the glucose levels of 203 women with normal glucose tolerance. In these groups, higher glucose levels at weeks 10 to 14 were associated with larger fetal size at week 20, which reached statistical significance at week 27. By week 37, fetuses in the high glucose group had an average estimated weight of about 6.8 pounds, compared to about 6.3 pounds in the normal glucose group.

The researchers concluded that, assuming their results are confirmed by other studies, efforts to reduce fetal exposure to high glucose levels may need to begin much earlier than at weeks 24 to 28 of pregnancy.