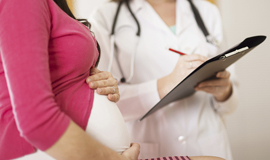 According to the authors, many studies have looked at the possible connection between gestational diabetes, maternal blood sugar levels, and children’s subsequent risk of obesity.  However, the results of these studies conflict. The researchers conducted their study to determine whether high maternal blood glucose levels in pregnancy affected a child’s risk of obesity by age 7.

The researchers analyzed 661 health records of mothers with gestational diabetes and their children. The records came from the Danish National Birth Cohort, a study established in Denmark during the mid-1990s to understand how exposures in early life affect future health. Unlike previous studies, the researchers accounted for many factors that could influence children’s weight independently of their mothers’ blood sugar levels, including the mothers’ pre-pregnancy obesity status, breastfeeding duration, and the children’s physical activity and consumption of sugary beverages.

They found a positive link between maternal blood sugar levels and childhood obesity risk. Moreover, the higher a mother’s blood sugar level, the greater the child’s later risk for obesity. With each incremental increase in maternal fasting blood sugar (defined as1 millimole per liter of blood) the child’s risk for being overweight or obese by age 7 increased by 21 percent.

This link with obesity also was more pronounced in children who drank sugar-sweetened beverages more than once a week, compared to children who consumed them less often. Seven-year-old children with the highest body mass index-for-age z-score—a measure of weight status in children—were born to obese women who had the highest blood sugar levels during pregnancy.

The study authors noted that the link between maternal blood sugar during pregnancy and childhood obesity was not continuous. Children who were obese by age 7 were not always obese at 5 or 12 months of age. The study authors suspect other factors could be involved, such as changes in the children’s metabolism, insulin production, and regulation of appetites. They said that additional studies are needed to find the answers.

“A longer follow-up period through adolescence and adulthood will address whether these findings persist later in life,” said study lead author Yeyi Zhu, Ph.D., a postdoctoral fellow at NICHD. “The results of our study and others like it may help in identifying lifestyle changes for pregnant women and children to prevent obesity over the life span.”

The study was funded by NICHD and the Danish Research Council and included authors from NICHD, the Statens Serum Institut in Denmark, the Rigshospitalet University Hospital in Denmark, the University of Copenhagen in Denmark, and Harvard T.H. Chan School of Public Health.

. The American Journal of Clinical Nutrition (2016)