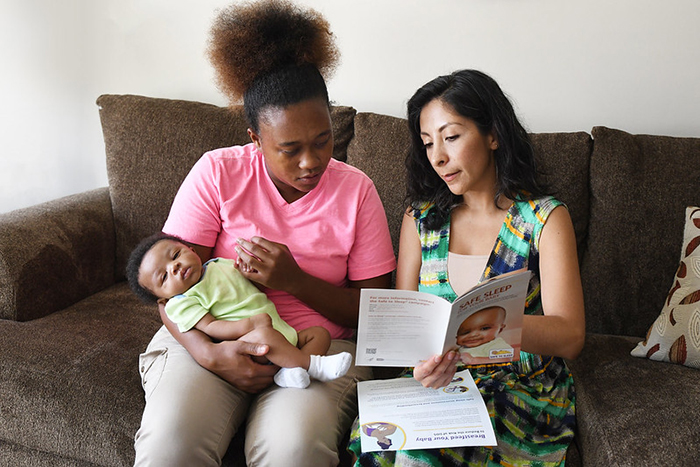 , a global non-profit working to protect kids from preventable injuries through a network of more than 400 coalitions. The partnership will enable the NICHD-led Safe to Sleep® campaign to leverage Safe Kids Worldwide’s network of trained community-level organizations and educators to help ensure that evidence-based safe infant sleep recommendations reach caregivers in select communities across the country.

“We’re excited to work with Safe Kids Worldwide in this unique partnership,” said NICHD's Lorena Kaplan, M.P.H., CHES, who coordinates the Safe to Sleep® campaign. “Their coalition network includes community members who can give us unprecedented reach at the local level to share safe infant sleep messages, materials, and resources.”

The Safe to Sleep® campaign began as the Back to Sleep campaign in 1994. Since that time, the rate of deaths attributed to sudden infant death syndrome (SIDS) has dropped by more than 50 percent in the United States. Still, certain U.S. populations, including African American and American Indian/Alaska Native babies, remain at high risk of SIDS. In addition, rates of other sleep-related infant deaths, such as suffocation while bedsharing with an adult, have increased as SIDS rates have declined. There are many ways that parents and caregivers can reduce the risk of SIDS and other sleep-related causes of infant death, including placing babies on their backs to sleep for naps and at night.

Recent research findings published in the journal Pediatrics show that although recommendations about back sleeping are fairly well known, information about other safe infant sleep practices—such as using a firm and flat sleep surface and room sharing without bedsharing—is not reaching certain communities. This partnership will capitalize on Safe Kids Worldwide’s network of community coalitions to reach caregivers and healthcare providers with life-saving messages. The organization also has a social media presence that can share safe infant sleep messages with communities and organizations worldwide that are interested in infant safety.