The Weinstein lab carries out studies on a variety of innovative research topics,  a few of which are noted below.  The majority of the laboratory studies various aspects of blood and lymphatic vessel formation and biology, but the lab has also recently pursued novel approaches to study the role of epigenetics during development. View a complete listing of our recent publications. 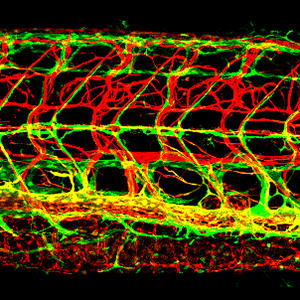 We seek to understand the cellular and molecular mechanisms responsible for the specification, patterning, and differentiation of blood and lymphatic vessels, and how vascular networks arise during vertebrate embryogenesis.  Blood vessels innervate and supply every tissue and organ with oxygen, nutrients, and cellular and humoral factors.  Lymphatic vessels are critical for fluid homeostasis, fat absorption , and immune function.  Both types of vessels are also critical in a variety of pathologies including vascular malformations, heart disease and ischemia, and cancer.  Many of the most important insights into mechanisms of vessel formation have come from developmental studies including those being performed in the Weinstein Lab.   We use zebrafish, endothelial cell culture, mice, and cavefish as our models of choice and employ a variety of sophisticated molecular, cellular, genetic, transgenic, microscopic imaging, and next-gen sequencing approaches to study developing blood and lymphatic vessels.  Some of our recent areas of research include studying endothelial specification and arterial-venous or tissue-specific differentiation, examining the assembly of trunk and cranial blood and lymphatic vascular networks, and uncovering the molecular cues that guide blood vessel and lymphatic vessel patterning, probing extracellular and intracellular pathways mediating angiogenic responses (including Rspo-Wnt and RECK-Wnt signaling, the Unfolded Protein Response (UPR) pathway, phosphoinositide recycling, and lipoprotein availability). 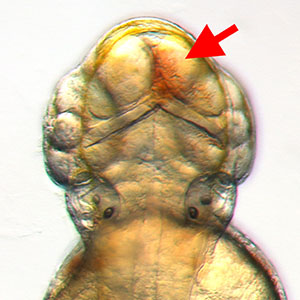 Another important goal of our research is to understand the mechanisms guiding proper vessel morphogenesis and the generation and maintenance of vascular integrity. Disruption of vascular integrity is associated with hemorrhagic stroke, a severe and debilitating form of stroke associated with high morbidity and mortality.  We are using genetic, experimental embryologic, and molecular methods to study the role of endothelial cells and smooth muscle cells in the acquisition and maintenance of an intact vascular barrier.  Some of our recent findings include showing that GDF6 promotes vascular stability by restraining VEGF signaling and demonstrating that smooth muscle acquisition promotes stabilization of the vascular basement membrane by preventing matrix protein degradation.  We are also studying the mechanisms of vascular lumenogenesis (tube morphogenesis).  We have developed novel single-cell imaging methods to image lumen formation in vivo, and are currently studying a number of genes and pathways involved in directing the proper assembly of vascular tubes.

IMAGE: Dorsal view of the head of a 3 dpf "bloody mary" (rhoaa) mutant zebrafish with prominent intracranial hemorrhage (red arrow).  This is one of a number of mutants discovered in a genetic screen for mutants with defects in brain vascular integrity carried out in the Weinstein Lab. 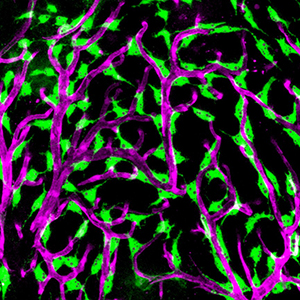 In addition to investigating the parallels between the cues directing assembly and patterning of nerves and vessels, we are also studying the functional interactions between the brain and its vessels, ie the “neurovascular unit.”  We are currently characterizing the development and role of the vasculature and vascular-associated cells of the meninges, a complex, highly vascularized connective tissue composed of multiple poorly characterized cell types that surrounds and envelopes the CNS.  We are using molecular, cellular, genetic, transgenic, microscopic imaging, and next-gen sequencing approaches to characterize the cell types present in the meninges, their origins, specification, and differentiation, and how they function in brain homeostasis an protection from injury and infection.  We have already identified several novel perivascular cell type closely associated with meningeal blood vessels, including a population of macrophage-like cells that remarkable share molecular identity and are derived from endothelium ("FGPs" - see image at left).

IMAGE:  Confocal micrograph of "Fluorescent Granular Perithelial Cells" (FGPs, in green) adhering to the outside of meningeal blood vessels (in purple) on the brain of a Tg(mrc1a:egfp); Tg(karl:cherry) double-transgenic adult zebrafish.  The Weinstein lab recently showed that FGPs are unique endothelium-derived perivascular cells with unusual scavenging properties that are likely critical for brain homeostasis.  See Venero Galanternik et al. for additional details.  The linked hi-res image shows an overview of FGPs (green) lining blood vessels (red) on the surface meninges of an adult zebrafish brain. 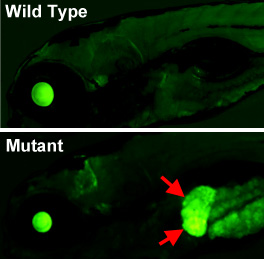 Our laboratory is also studying the "genetics of epigenetics.”  We have discovered novel epigenetic mechanisms regulating hematopoietic development and eye development.  We showed that the DNA methyltransferase DNMT3bb.1 regulates hematopoietic stem cell (HSC) maintenance by maintaining cmyb expression after an initial phase of runx1-dependent HSC specification.  We also showed that excess DNA methylation-based epigenetic silencing promotes eye degeneration in blind cave A. mexicanus and that DNA methylation-based gene repression can serve as an important molecular mechanism generating phenotypic diversity during development and evolution.  We are currently carrying out the first large-scale forward-genetic screen in a vertebrate for tissue-specific epigenetic regulators.  This highly successful ongoing screen has resulted in the identification of a large number of new vertebrate epigenetic regulatory genes, which we are now in the process of molecularly cloning, characterizing, and studying.

The zebrafish is the primary model organism for most of our studies, although we also use mice and especially endothelial cell culture in many of our projects, and use the Astyanax mexicanus surface and cavefish as a complementary aquatic model.  We employ cutting-edge imaging and molecular technologies for our research work and we have developed a variety of important tools and methods to facilitate our studies.  We also continue to use forward genetic screens to identify functionally critical genes of interest, using modern sequencing methods to facilitate rapid isolation of mutated genes. 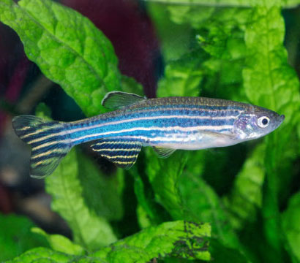 Zebrafish are small tropical fish native to Southeast Asia that have a unique combination of genetic and experimental embryologic advantages making them ideal for studying early development, particularly the embryogenesis of the circulatory system. Learn more about zebrafish. 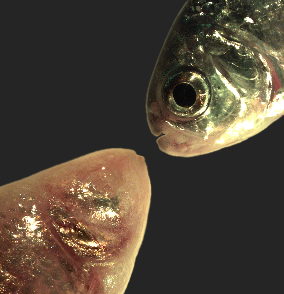 Astyanax mexicanus is a freshwater fish native to parts of southern Texas and eastern and central Mexico that exists in both surface-dwelling ("surface morphs") and very closely related cave-dwelling ("cave morphs") populations.  Cave morphs have a series of uniquely evolved adaptations including loss of eyes and pigment, dramatically altered metabolism, altered vascular function, and altered sleep regulation and behavior.  Results from our laboratory suggest that altered DNA methylation and resulting coordinated changes in expression of large sets of genes have helped to drive at least some of this rapid evolutionary change. Learn more about the Mexican Tetra Cavefish. 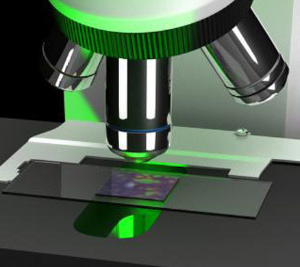 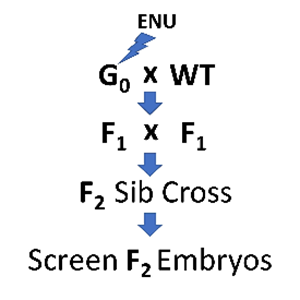 The ability to keep large numbers of fish and obtain large numbers of externally developing offspring make this a superb model for forward genetics.  Although reverse-genetic "genome editing" has become popular amongst zebrafish researchers, and is used extensively in the Weinstein Lab, forward-genetic phenotype-based screens are still the most effective way to uncover genes essential for a particular process of interest.  Molecular identification of the mutated genes is now fast and easy using next-gen sequencing methods to map mutants and identify causative lesions.  We are expert in both genetic screens and in next-gen cloning of mutated genes.