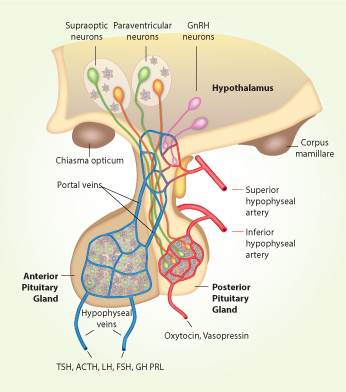 Schematic representation of hypothalamus-pituitary system.The hypothalamus is located at the base of the brain, below the third ventricle and just above the optic chiasm and pituitary gland. The pituitary stalk, which connects the median eminence to the pituitary gland, passes through an opening in the dura surrounding the brain. The pituitary gland rests in the sella turcica outside the dura and below the optic chiasm and is composed of anterior and posterior lobes. The anterior lobe contains five major secretory cells that are controlled by specific hypothalamic peptide hormones: adrenocorticotropic hormone (ACTH) producing corticotrophs; thyroid-stimulating hormone (TSH) producing thyrotrophs, growth hormone (GH) producing somatotrophs, prolactin (PRL) producing lactotrophs, and follicle-stimulating hormone (FSH) and luteinizing hormone (LH) producing gonadotrophs. These hormones are released in response to stimulation by the appropriate hypothalamic releasing hormones, including corticotropin-releasing hormone (CRH), thyrotropin-releasing hormone (TRH), growth hormone-releasing hormone (GHRH), and gonadotropin-releasing hormone (GnRH). The secretory functions of somatotrophs and lactotrophs are also negatively controlled by hypothalamic somatostatin and dopamine, respectively. Most of the cell bodies of the hypothalamic neurons containing neurohormones are located in the tuberal area in the anterior part of the hypothalamus, whereas their terminals are in the median eminence, where hormones are released directly into a primary capillary plexus. These capillaries empty into the portal venous circulation, travel down the pituitary stalk, and flood the anterior pituitary lobe in a secondary capillary plexus. The posterior lobe contains the axon endings of hypothalamic nerve cells, which secrete oxytocin and vasopressin directly into the circulation. During the last three decades our work has been focused on characterization of signaling pathways operative in hypothalamic GnRH-secreting neurons and endocrine anterior pituitary cells.

Single cell studies with identified secretory anterior pituitary cells revealedthat they are neuronlike; they express numerous voltage-gated sodium, calcium, potassium, and chloride channels and fire action potentials spontaneously, accompanied by a rise in intracellular calcium. Our investigations further established different patterns of spontaneous electrical activity in endocrine pituitary cells: single spiking, plateau-bursting, and pseudo-plateau bursting. We further showed that activation of both calcium-mobilizing and adenylyl cyclase-coupled GPCRs leads to transition of single spiking to bursting type of electrical activity. Simultaneous recording of calcium and membrane potential and secretory and gene expression studies with perifused pituitary cells showed that bursting activity, but not single spiking, is sufficient to drive the intracellular calcium concentration ([Ca2+]i) above the threshold for stimulus-secretion and stimulus-transcription coupling. We also identified channels accounting for resting membrane potentials and spiking depolarization, as well as the mechanism for bursting and repolarization and channels involved, focusing on the role of calcium-controlled potassium channels in these processes. More recently we found that pituitary cells also express cyclic nucleotide-gated HCN channels, voltage insensitive background sodium channels, and cation-conducting depolarizing channels; we are progressing with a study on identification of their roles in resting membrane potential and spontaneous and receptor-controlled electrical activity. The ongoing experiments are also focused on characterization of electrical status of pituitary stem cells and single cell heterogeneity of electrical activity during development combined with analysis of expression of selected ion channel genes.

We also characterized the role of intracellular inositol trisphosphate (IP3) receptor channels in calcium signaling and crosstalk between these channels and plasma membrane voltage-gated ion channels in pituitary cells. As in other cell types, we showed thatactivation of IP3 receptors results in a large and sudden increase in intracellular calcium concentration ([Ca2+]i). Following this initial calcium pulse, one of the two behaviors can be observed in pituitary cells, depending on the cell type. In lactotrophs, somatotrophs, thyrotrophs and cells from the GH cell lines, the pulse is typically followed by a slow and non-oscillatory decline to a plateau in [Ca2+]i. In gonadotrophs, the pulse is typically followed by large baseline [Ca2+]i oscillations. We further showed the biphasic calcium response requires only that the IP3 channels open and remain open during IP3 increase, that oscillations in [Ca2+]i in gonadotrophsare intrinsic to the calcium-handling properties, and that oscillations in IP3 are not required to generate oscillatory Ca2+ release. The increase in [Ca2+]i is accompanied with activation of calcium-controlled SK-type potassium channels. As [Ca2+]i declines to a sufficiently low level, we also show that a voltage-gated calcium entry pathway is activated, bringing additional calcium into the cell and producing an elevated plateau or fluctuations in [Ca2+]i. The current focus in investigations is on establishment of the pattern of calcium release during postnatal regeneration of secretory pituitary cells from stem cells.

Our experiments also revealed that pituitary cells express purinergic P2X, nicotinic, and GABA-A ligand-gated channels. The main focus in our work was on P2X channels. Pituitary gonadotrophs and somatotrophs express slow desensitizing P2X2 channels operating as pacemaking channels and modulators of GnRH-controlled electrical activity and secretion. In contrast, lactotrophs express the desensitizing P2X4 and pore dilating P2X7 receptor channels and their activation causes facilitation of spontaneous electrical activity, calcium signaling, and PRL secretion. The ongoing experiments indicate that corticotrophs do not express these channels and thyrotrophs express both P2X2 and P2X4 channels. This was followed by structural and functional studies with recombinant P2X2, P2X4 and P2X7 receptor channels expressed in HEK293 and GT1 cells. We generated several chimeras and over 200 single residue mutants and examined the ATP induced currents. These investigations helped in identification of extracellular ATP binding sites, the transmission of signals from ATP binding sites to the pore of the channels, and the role of extracellular vestibules in signaling by these channels. We also described the existence of two open states of these channels. In addition, we extensively studied the allosteric regulation of these channels by divalent cations, mercury, and ivermectin and identified binding sites for these regulators. The current focus in these investigations is on permeability of P2XR pore for large organic cations and the impact of phosphorylation status of channels on gating properties.

Signaling by pituitary GPCRs and crosstalk with ion channels

Pituitary cells also express numerous GPCRs, which can stimulate or silence electrical activity and Ca2+ influx through voltage-gated Ca2+ channels and hormone release. Initially, we studied the Ca2+-mobilizing receptors GnRH and endothelin, which activation causes oscillatory calcium release in gonadotrophs.  We further show that in other endocrine cell types, activated endothelin receptors generate non-oscillatory biphasic response, indicating that the receptor subtype does not determine the pattern of calcium release. Our studies also indicated that GHRH and CRH pituitary receptors positively coupled to the adenylyl cyclase signaling pathway stimulate electrical activity with cAMP, which activates hyperpolarization-activated cyclic nucleotide-regulated channels directly, or by cAMP-dependent kinase-mediated phosphorylation of K+, Na+, Ca2+, and/or non-selective cation-conducting channels. Studies with dopamine DA2 receptor-mediated electrical activity in lactotrophs, confirmed that these receptors are negatively coupled to adenylyl cyclase signaling pathways but inhibit spontaneous electrical activity and accompanied Ca2+ transients predominantly through the activation of inwardly rectifying K+ channels and the inhibition of voltage-gated Ca2+ channels, whereas the Gz signaling pathway also accounts for dopamine-induced inhibition of PRL secretion. We also analyzed other signaling pathways activated by pituitary GPCRs, including the phospholipase C- and phospholipase D-dependent activation of diacylglycerol - protein kinase C signaling as well as activation of soluble guanylyl signaling pathway through calcium signaling and by protein kinase A-dependent phosphorylation of this enzyme.

Our collaborative work with a mathematical group from NIDDK is based on comparison of experimental data and theory. The first mathematical model we developed in collaboration with John Rinzel and his group describes several aspects of IP3-dependent calcium oscillations in gonadotrophs, including modulation of the frequency of calcium spikes by non-oscillatory IP3. We also developed two quantitative mathematical models of gonadotroph calcium signaling, one describing firing of single spiking spontaneously and the other describing plateau bursting type of electrical activity in response to GnRH stimulation with a critical role of SK-type of calcium-controlled potassium channels in synchronization of electrical activity and IP3-dependent calcium oscillations. In collaboration with Arthur Sherman and his colleagues, a model of electrically active somatotrophs firing pseudo-plateau bursting action potentials determined by BK-type calcium-controlled potassium channels was developed. More recently, our collaborative work was focused on modeling of P2X channel gating. Initially, we developed a model that describes a biphasic P2X7 current and provides rationale for the existence of two open states and transition from open to sensitized states. We also developed gating models of P2X2 and P2X4 receptor channels, the former integrating ta role of calcium in receptor desensitization and the latter describing allosteric modulation by ivermectin.  The current investigation in this collaborative work is focused on characterization of genetic and functional heterogeneity of endocrine pituitary cells using t-distributed stochastic neighbor embedding plots and cluster analysis. Mapping between genetically and functionally defined subpopulations could reveal insights into the coordinated expression of phenotype and genotype, a topic of great general interest beyond the pituitary.