Expression of cell type-specific sets of genes gives rise to the large variety of cells in our bodies. Enhancers are genomic regions that control cell type-specific gene expression. They are activated by binding of proteins known as Transcription Factors. Active enhancers then control expression of their target genes to orchestrate specification of different cell types. Our lab studies the genome folding mechanisms that guide enhancers to their target genes while avoiding off-target activation. These mechanisms are essential to ensure accurate cell lineage specification and healthy pregnancies. 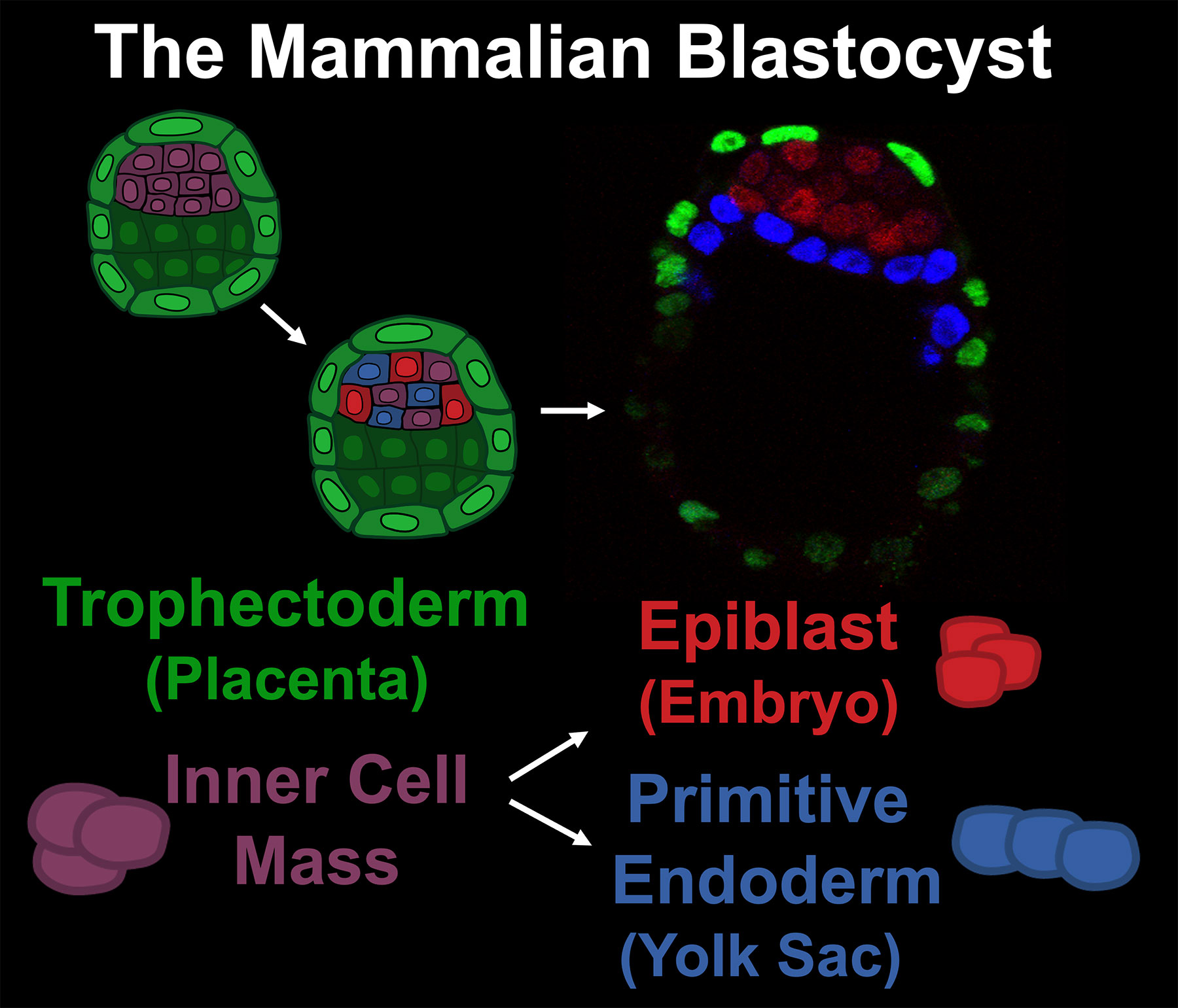 The life of placental mammals begins as a zygote. This single cell gives rise to a repertoire of embryonic and extra-embryonic cell types that support development in utero. The first mammalian cell fate decisions occur during the Blastocyst stage. Cells in the periphery form the Trophectoderm, which then gives rise to the placenta. Cells in the interior of the blastocyst are known as the Inner Cell Mass (ICM) and are the progenitors of the Epiblast and the Primitive Endoderm. While Epiblast cells form almost all our embryonic tissues, the Primitive Endoderm is responsible for specification of the yolk sac, which together with the placenta nourishes the embryo. Defects in specification of these cell types frequently impair pregnancies. 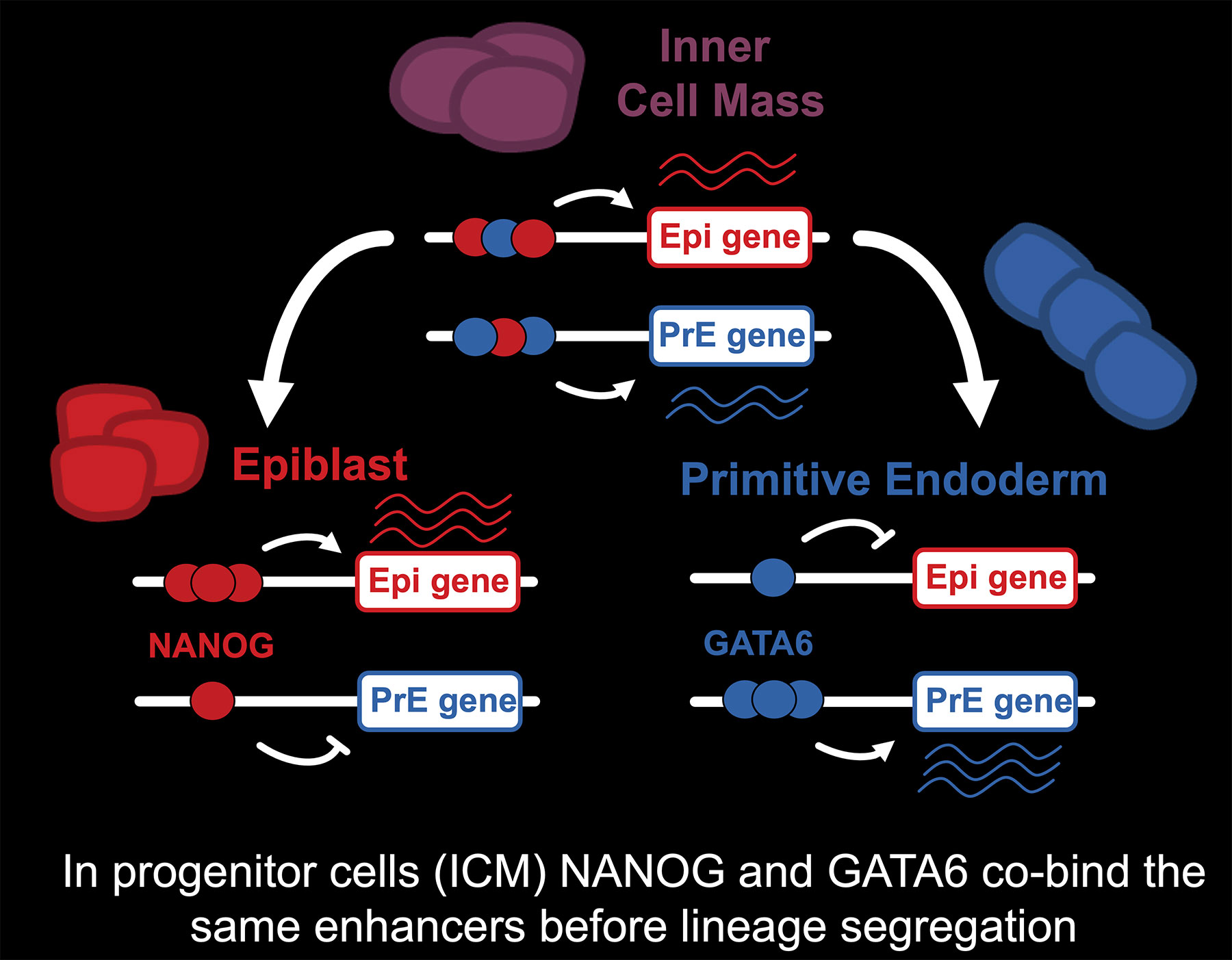 NANOG is a Transcription Factor responsible for inducing genes that specify Epiblast cells. In contrast, GATA6 activates Primitive Endoderm genes. We have recently made the surprising observation that in progenitor cells of the ICM, rather than occupying only enhancers of each specific lineage, NANOG and GATA6 co-bind at most Epiblast and Primitive Endoderm enhancers. We propose that co-binding of GATA6 and NANOG at shared enhancers, maintains ICM plasticity and promotes the rapid establishment of Epiblast- and Primitive Endoderm-specific genes. You can read more about this in our recent publication (Thompson et al. Nature Communications 2022

We are currently exploring the mechanistic details of this process to understand how co-binding of Transcription Factors that specify divergent lineages contributes to rapid cell fate decisions. 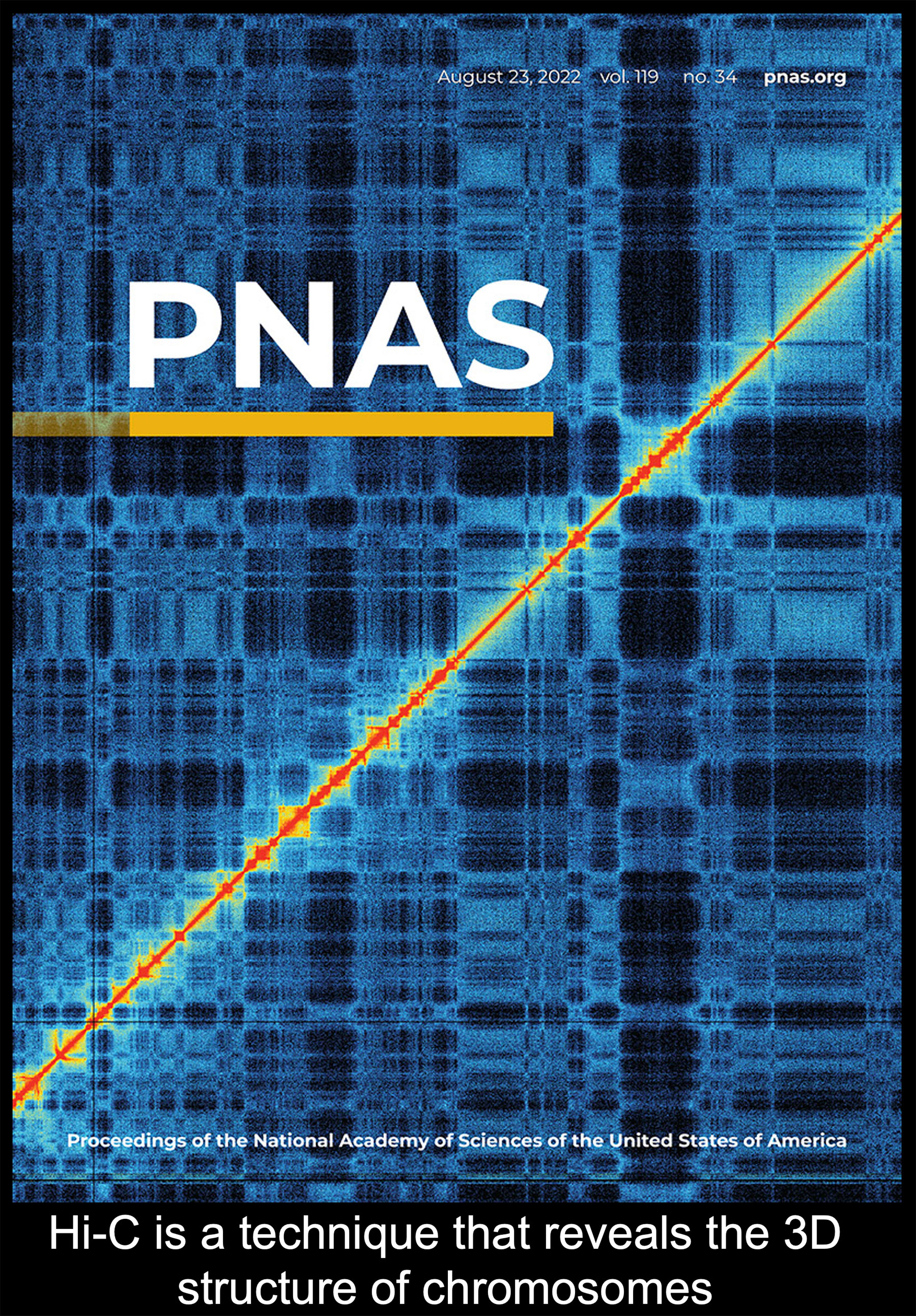 As cells progress through their differentiation trajectories to become more and more specified, regulatory interactions between enhancers and promoters have to be remodeled and re-established. We are very interested in understanding the dynamics of this reorganization, the mechanisms that drive it, and how its importance to specification of cell fates may change throughout development. For example, during specification of the Primitive Endoderm we have shown that the co-bound state of NANOG and GATA6 in ICM cells, is followed by NANOG eviction and repression of Epiblast genes. This is accompanied by quick remodeling of chromatin and enhancer-promoter contacts. This dynamic rewiring of the genome is not unique to the Blastocyst. We have recently shown that a specialized cell type of our immune system, Dendritic Cells, also rearrange their genome throughout differentiation (Kurotaki et al. PNAS 2022

One of the genome folding mechanisms that we understand better is the formation of DNA loops by the combined action of cohesin and CTCF. These loops form because of the ability of the ring-shaped cohesin complex to extrude DNA and of CTCF to retain extruding cohesin. CTCF-cohesin loops can facilitate contacts between enhancers and genes but also ensure that enhancers cannot activate genes outside of their loop. However, it isn’t yet clear how these models are generalizable to all genes and how the impact of CTCF-cohesin loops on gene regulation may be affected by different types of genes, enhancers, and loops. 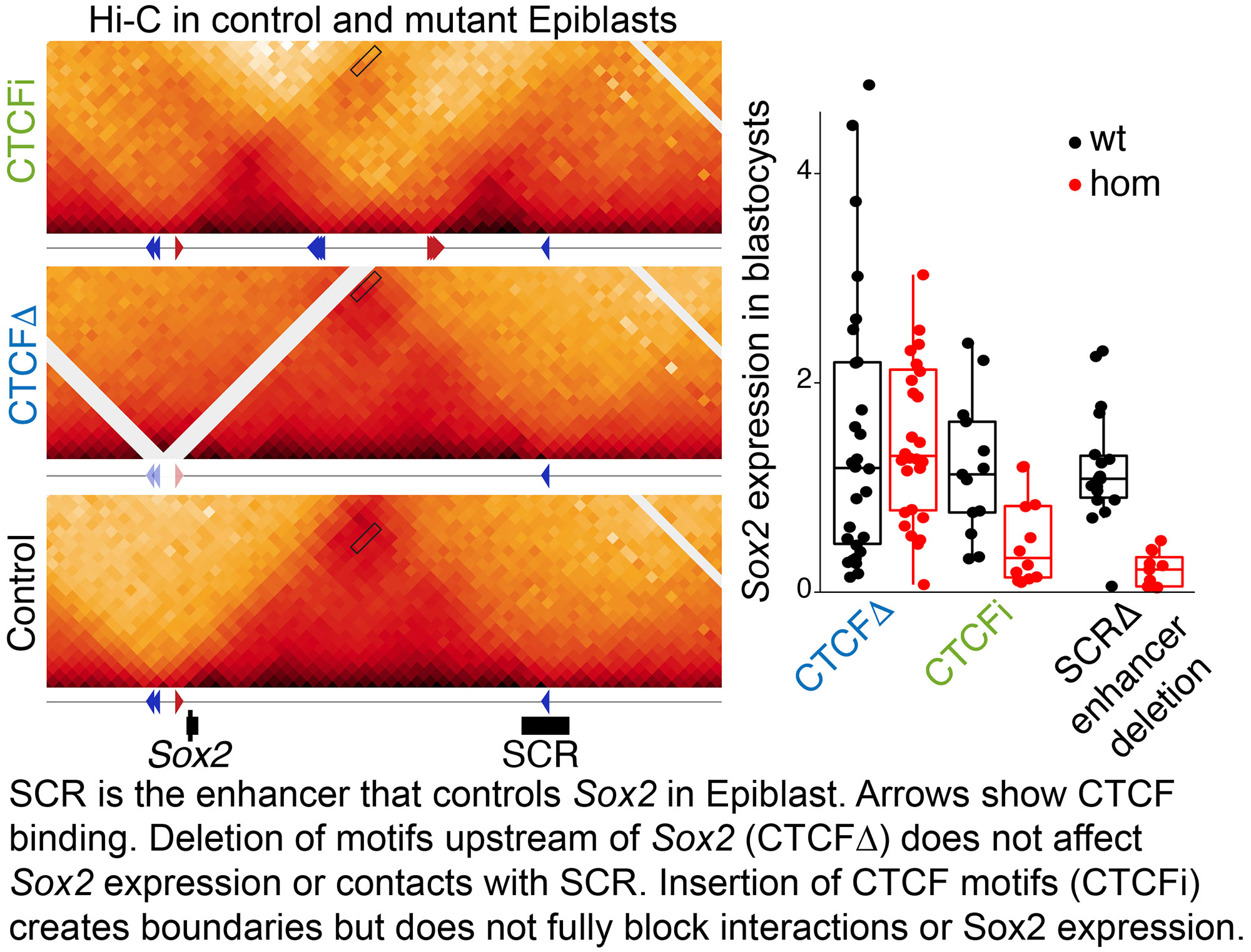 SOX2 is a Transcription Factor important for Epiblast specification, neurogenesis and tracheoesophageal separation. Its locus is bound by CTCF directly upstream of its promoter, which suggest that CTCF-cohesin loops could be used to recruit its different tissue specific enhancers. For these reasons, the Sox2 locus is a very useful model to study gene regulation. Surprisingly, we have recently shown (Chakraborty et al. Nature Genetics 2022

) that Sox2 recruits its enhancers through mechanisms that do not rely on CTCF-cohesin loops. We also generated an extensive series of mouse mutants with insertions of ectopic loops between Sox2 and its enhancers. Unexpectedly, we observed that the ability of these loops to restrict enhancer range was not always the same. We showed that it is highly dependent on the insulation strength of the inserted CTCF-cohesin loops, and on the clustering of enhancers in the linear and 3D genome. You can read a summary of these findings here

Robustness and Susceptibility to Perturbation of Chromatin Structure

Our work has shown that expression of Sox2 can be extremely robust to perturbation of chromatin structure. In both epiblast and neural tissues, enhancer contacts and transcriptional induction could not be fully abolished by insertion of CTCF-cohesin loops and failed to disrupt implantation and neurogenesis. We suggest that robust enhancer-promoter interactions that bypass CTCF insulation, may provide a selective advantage by ensuring faithful gene regulation in the face of structural perturbations that interfere with regulatory contacts. In contrast, Sox2 was undetectable in the anterior foregut of mutants carrying the strongest boundaries, and these animals fully phenocopied loss of SOX2 in this tissue.

We are now very interested in better understanding what predisposes some loci and developmental processes to being more sensitive to perturbation of chromatin structure.