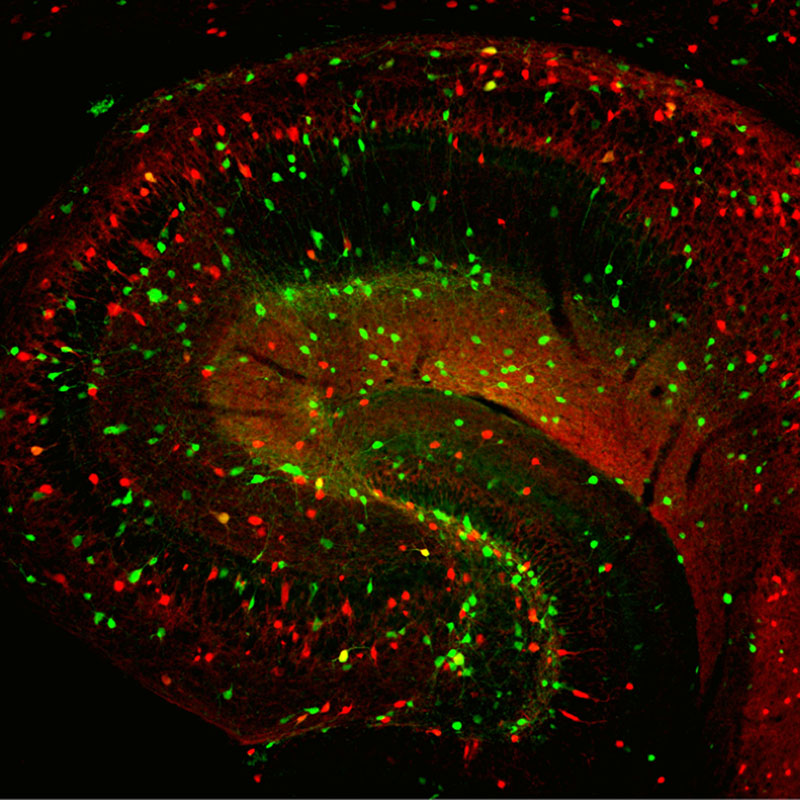 Work in the McBain Laboratory is targeted towards understanding the development of excitatory and inhibitory synaptic transmission between specific identified neural populations within the hippocampal and cortical formations. Using electrophysiological, immunohistochemical, anatomical, molecular and genetic approaches we hope to gain significant insight into the developmental- and activity-dependent regulation of cellular and synaptic efficacy under both physiological and pathophysiological conditions.

As our model we have chosen to study subpopulations of principal and local circuit GABAergic inhibitory interneurons within the hippocampal formation. Within cortical networks the net flow of information is strongly modulated by the action of inhibitory interneurons, whose cell bodies are distributed throughout all layers of the hippocampus and comprise ~15% of the total neuronal population. Work performed in my laboratory over the last few years has contributed to a large body of literature showing that not only do the basic physiological properties of inhibitory interneurons differ from pyramidal neurons, but interneurons also possess a repertoire of both voltage gated and ligand gated channels distinct from principal neurons. These differences range from the molecular identity of receptors and channels to mechanisms of short- and long-term synaptic plasticity and signal transduction mechanisms associated with glutamate receptors. It is our hope that by understanding the basic mechanisms underlying inhibitory interneuron development and integration into their appropriate circuits we can begin to elucidate the roles played by the various neuronal and non-neuronal elements in specific clinically relevant neural circuit disorders.

At the time of establishing my lab in 1993 there was little known concerning glutamate receptor expression on specific cohorts of GABAergic local circuit inhibitory interneurons of the hippocampal or cortical formations. Over the course of the next twenty years we have contributed a wealth of information regarding the differential expression of AMPA- NMDA- and kainate receptors on inhibitory interneurons of both hippocampus and cortex. Specifically we have examined the role of receptors expressed at both pre- and postsynaptic locations onto different subtypes of inhibitory interneurons. We have shown novel forms of synaptic transmission as well as distinct mechanisms of both short- and long term plasticity of synaptic transmission. More recently as we have turned our attention to the developmental rules underlying interneuron migration, maturation and incorporation into nascent cortical structures (see below) we have shown how glutamatergic synapses are constructed and altered during development and how their embryonic origins dictate their rules of engagement. We have explored novel accessory and adaptor proteins that have a unique expression in inhibitory interneurons and what roles they play in glutamate receptor assembly and expression. 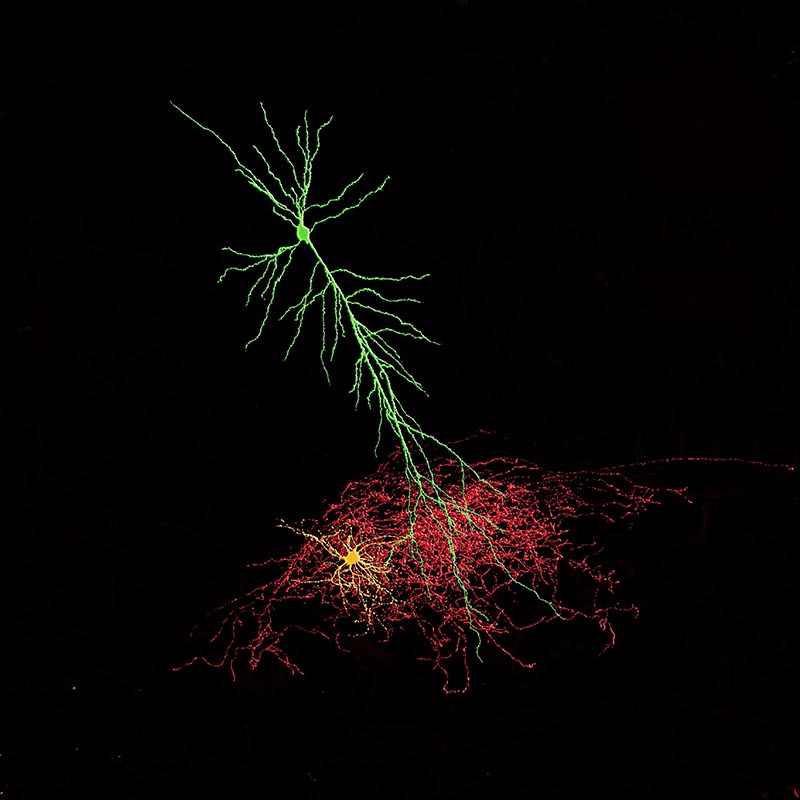 A natural extension of studying glutamate receptors on inhibitory interneuron has been the exploration of novel forms of short- and long term plasticity endowed on interneurons by the unique expression profiles of glutamate receptors. To this end we first demonstrated that most interneurons lack a canonical form of NMDA-receptor dependent long-term potentiation commonly observed at glutamate synapses onto principal cells. We then explored the expression profiles of voltage-gated ion channels expressed on specific interneuron subtypes and were the first to describe the repertoire of voltage-gated potassium conductances and their modulation by monoamines on any interneuron subtype. We were first to describe the biophysical properties of both Kv3.2 and the hyperpolarizing-activated current Ih in somatostatin-containing OLM interneurons (a cell I was first to describe with Julie Kauer) and demonstrated a critical role for Ih in generating spontaneous action potential firing in these cells. We then extended these studies to explore the roles played by interneurons in establishing oscillatory activity in neuronal ensembles as well as explore mechanisms of neuromodulation of oscillatory activity by a variety of physiologically relevant neurotransmitters and modulators including (but not limited to) histaminergic and acetylcholinergic systems.

A major focus of the lab for almost a decade was the exploration of the differential mechanisms of glutamatergic transmission at synapses between the mossy fiber axons of dentate gyrus granule cells and their downstream CA3 subfield principal cell and inhibitory interneuron targets. We were the first to show that mossy fiber synapses onto inhibitory interneurons could comprise either GluA2-containing AMPA receptors or GluA2-lacking AMPA receptors. Each type of AMPA receptor was paired with a particular type of NMDAR subunit combination to provide novel forms of synaptic transmission at mossy fiber-interneuron synapses. GluA2-lacking AMPA receptor containing synapses provided a novel route for postsynaptic Ca2+-entry, as well as endowing these synapses with a novel form of use dependent short term facilitation that relied on polyamine unblock from the Ca2+-permeable AMPA receptor. During these studies we also identified a novel form of long lasting depression at mossy fiber sysnapses onto pyramidal cells that relied on Ca2+ entry through Ca2+ -permeable AMPA receptors transiently expressed on pyramidal cells during early development.  We then explored the developmental maturation of feedforward inhibitory drive in this pathway and demonstrated that the excitation:inhibition balance remained fixed onto downstream CA3 principal neuron targets despite many features of synaptic transmission altering during circuit development. Finally in collaboration with the Tonegawa lab at the Picower Institute we explored the role played by adult neurogenesis of newborn granule cells in influencing the already established mossy fiber circuit, providing the first indication that cells generated during adult neurogenesis were responsible for pattern separation but not completion in vivo.

Early on we demonstrated that induction paradigms that triggered an NMDAR-independent form of presynaptic plasticity at mossy fiber-principal cell synapses triggered a concomitant depression at mossy fiber-interneuron synapses. In a subsequent string of Neuron papers we then showed that presynaptic expression of the metabotropic glutamate receptor mGluR7 at mossy fiber-interneuron synapses acted as a metaplastic “switch” which was permissive for induction of this depression of synaptic transmission. Under normal conditions mGluR7 activation triggered a reduction in presynaptic voltage-gated Ca2+ channel activity and prevented activity induced cAMP formation from reaching its modulatory site on the release machinery. On activation and binding of glutamate, mGluR7 is then rapidly internalized and subsequent rounds of high frequency activity can trigger adenylyl cyclase/cAMP formation that can now induce presynaptic long term potentiation at both mossy fiber-pyramidal cell and inhibitory interneuron synapses.

In the last few years we have turned our attention to the study of the development of inhibitory interneurons and the roles they play in establishing the nascent hippocampal circuit. To this end we have taken a genetic approach and made good use of a number of animal lines that have allowed the fate mapping of specific cohorts of inhibitory interneuron generated within the ganglionic eminences of the ventral telencephalon. Using these approaches combined with electrophysiological, morphological, imaging and biochemical techniques we provided the first “blueprint” for the origins of virtually every type of hippocampal inhibitory interneuron. We then demonstrated that glutamate receptor expression at excitatory synapses onto inhibitory interneurons is dictated by their position of origin within the ganglionic eminences. This research has shown for the first time that receptor expression is intimately linked to the embryonic site of origin. We have then explored the roles played by well defined interneurons subtypes during development as well as exploring how conditions that interfere or perturb formation of particular interneuron connections impacts the local circuit. Along the way we demonstrated that certain subtypes of interneuron are actually duplicated within the hippocampal circuit and possess distinct origins within the ganglionic eminences despite ultimately possessing many common features including morphology and receptors for neuromodulation. This observation acts to expand the repertoire of inhibitory interneurons available within the hippocampal circuit and we are actively exploring the role(s) played by each of these cell types.