The content in this publication was accurate at the time it was published, but it is not being updated. The item is provided for historical purposes only.​

The Epidemiology of Traumatic Brain Injury Among Children and Adolescents*

Traumatic brain injury (TBI) is a leading cause of death and disability in the United States. Estimates suggest that each year among people of all ages, 260,000 are hospitalized, 51,000 die, and up to 90,000 have the onset of long-term disability related to TBI. 1-3 TBI thus represents a public health problem of great magnitude with profound consequences for those affected and for their families. However, the risk factors and consequences of these injuries have not been adequately characterized for the pediatric population. To demonstrate the burden and distribution of TBI incidence among children and adolescents and to highlight gaps in current knowledge, this paper describes the epidemiology of fatal and nonfatal traumatic brain injuries among persons aged 0-19 years, using population-based data.

The Centers for Disease Control and Prevention (CDC) defines traumatic brain injury as an occurrence of injury to the head (arising from blunt or penetrating trauma or from acceleration-deceleration forces) that is associated with any of the following symptoms or signs attributable to the injury: decreased level of consciousness, amnesia, other neurologic or neuropsychologic abnormalities, skull fracture, diagnosed intracranial lesions, or death. 4

For this analysis, causes of traumatic brain injury are broadly classified as transport-related, firearm-related, fall-related, and related to other causes. 5 Transport-related injuries are further classified as involving a motor vehicle occupant (i.e., occupants of automobiles, trucks, or buses), motorcyclist, pedal cyclist, or pedestrian. Firearm-related injuries are further classified by intent: unintentional, intentional self-inflicted (suicidal), intentional other-inflicted (assaultive or homicidal), and other (including legal interventions and injuries of undetermined intent).

TBI-associated Mortality for the United States, 1980-1994

We used the Multiple Cause-of-Death Public Use Data Tapes from the National Center for Health Statistics (NCHS) to identify TBI-associated deaths in the United States for the years 1980 through 1994. A death record that contained an ICD-9 code 6 in the ranges of 800.0 to 801.9, 803.0 to 804.9, 850.0 to 854.1, 873, 905.0 or 907.0 in any diagnostic field was included as a TBI-related death. We calculated annual age-, sex-, and race-specific death rates using U.S. resident population estimates from the Bureau of the Census for each year. Rates for all ages combined were not age-adjusted.

Since 1990, the National Center for Injury Prevention and Control (NCIPC) of the CDC, in collaboration with state health departments and other researchers, has been developing a multistate, population-based TBI surveillance system in order to better characterize the number of people sustaining traumatic brain injury, the underlying causes and risk factors, and the severity and outcome of these injuries. Seven state health departments provided data to CDC on cases of TBI occurring in 1994. State health departments in Arizona, Colorado, Minnesota, Missouri, Oklahoma, New York, and South Carolina reviewed statewide hospital discharge data collected from January 1, 1994 through December 31, 1994, using CDC guidelines to identify occurrences of TBI. 4 Cases included all patients discharged from acute care hospitals with primary or secondary diagnoses consistent with the CDC definition of an acute traumatic brain injury, i.e., ICD-9-CM diagnostic codes 7 800.0 to 801.9, 803.0 to 804.9, 850.0 to 854.1. ** Minnesota and New York provided hospital discharge data only. The other five states also provided supplementary information on severity and external cause of injury obtained from abstracts of medical records or health-care provider report forms for all cases (Missouri and Oklahoma) or from a representative sample of cases (31% of cases in Arizona, 47% of cases in Colorado, and 45% of cases in South Carolina). In addition, all states identified TBI-related deaths through a review of death certificates and medical examiner reports that listed TBI or head injury among the conditions associated with death. Records were linked to eliminate duplicate cases reported from more than one source.

Surveillance was statewide in all states except New York, which excluded residents of New York City. The combined TBI incidence rate for all seven states was calculated using the sum of the number of cases for each state and the sum of the population of each state estimated at the midpoint of 1994 (35.3 million total). Rates for all ages combined were not age-adjusted.

Race. Trends in rates of TBI-related death among children and adolescents differed among racial groups. While rates among whites decreased between 1980 and 1994, rates among African Americans increased sharply (Figure 3). Since 1988, the TBI-associated mortality rate among African Americans (16.7/100,000 in 1994) has been higher than the corresponding rate among whites and other races (10.8 and 8.3 per 100,000, respectively).

From 1980 to 1994, the transport-related mortality rate associated with TBI decreased 44% among persons aged 0-19 years. Nevertheless, for this entire age group, transport-related injuries remained the leading cause of TBI-related mortality throughout this interval, representing 53% (4,577) of all TBI-related deaths in 1994 (Figure 4). Of these deaths, 58% were occupants of a motor vehicle, 17% were pedestrians, and 5% were bicyclists. Another 17%, classified as "unspecified person" involved in a motor vehicle collision, were most likely motor vehicle occupants 4 (Figure 5). Between 1980 and 1994, transport-related TBI mortality rates were consistently highest among 15-19 year olds (15.0/100,000 in 1994), about five-fold higher than among 0-14 year olds. Males had consistently higher transport-related TBI mortality rates than females (7.8/100,000 vs 4.3/100,000 in 1994).

Other important causes of TBI-related death among children and adolescents include child battering and homicides not involving firearms. In 1994, these accounted for 2% and 3%, respectively, of all deaths in this age group.

Fifty-four percent of all TBIs among children and adolescents were transport-related, 24% were fall-related, and 5% were firearm-related, a distribution that contrasts sharply with the distribution of fatalities alone (Table 3). Falls were the leading cause of TBI among 0-4 year olds, while transport-related mishaps were the leading cause among all other age groups of children and adolescents (Figure 7).

There were also differences among age categories in the proportion of TBIs with fatal outcome. Among 15-19 year olds, 21% of TBIs had a fatal outcome, compared with only 7% of TBIs among 5-9 year olds (Table 2). This difference may reflect the higher incidence of injuries related to firearm use and motor vehicle crashes among older adolescents (Figure 7).

Applying the 1994 TBI incidence rate from the seven state surveillance system (90/100,000) to the U.S. population aged 0-19 years (n=75,790,485), we estimate that approximately 68,000 persons aged 0-19 years sustained a TBI resulting in hospitalization or death in 1994. Applying a case fatality rate of 13.3% from the seven state surveillance system (Table 2), we estimate that about 9,000 of these children and adolescents died of their injuries, either before reaching a hospital or during their hospital stay, while over 59,000 youth survived.

The examination of national mortality data as well as combined morbidity and mortality data from seven states points to some success in the prevention of traumatic brain injury among children and adolescents. The overall TBI mortality rate decreased between 1980 and 1994, associated in large measure with decreased rates of transport-related TBI. This finding suggests a degree of success with TBI prevention efforts involving motor vehicle occupant protection and helmet use. 2,8-12 Although improved, rates of transport-related TBI remain high and call for further prevention efforts. Our findings, like the findings of other studies, 13,14 also identify other causes of TBI and groups at increased risk for which focused prevention efforts are needed.

The increasing TBI mortality rate among African-American youths---associated with an increasing incidence of firearm-related injury---deserves special attention. Given the very high proportion of fatalities among those with firearm-related TBI, effective and coordinated interpersonal violence prevention and suicide interventions are needed to address those at risk. 15 Prevention programs for intentional injuries among adolescents deserve special emphasis.

As noted previously, we estimate that each year almost 60,000 American children and adolescents survive TBIs serious enough to require hospitalization. At the present time, the proportion of these young people who consequently experience cognitive or other disabilities is unknown. Nevertheless, the high incidence of TBI suggests that a large number of children and adolescents may have need of specialized care and services subsequent to these injuries, i.e., secondary and tertiary prevention interventions. Secondary prevention efforts addressing TBI (e.g., acute medical care) serve to mitigate and contain the acute effects of injury, while tertiary prevention efforts (e.g., rehabilitation) serve to minimize adverse outcomes and disability consequent to these injuries. We need better data in order to characterize the need for secondary and tertiary prevention programs for children and adolescents with TBI.

With the development of CDC?s multistate surveillance system, we can estimate population-based rates of TBI and can begin to characterize the severity and outcome of these injuries. However, there remain important issues related to TBI-related disability that should be addressed by the development of a population-based registry for TBI among children and adolescents.

Much work remains to be done in the assessment, treatment, and prevention of traumatic brain injury, especially among the pediatric population. The findings of this paper highlight the need for standardized, state-based surveillance systems that can be used to describe the national incidence, causes, risk factors, severity, and---especially---outcomes of traumatic brain injury. Such systems are essential for identifying those at risk for TBI, and for designing primary, secondary, and tertiary prevention programs, helping to assess the effectiveness of rehabilitation programs, and assuring access to these programs for persons with TBI.

*Paper provided by the Center for Disease Control Prevention. 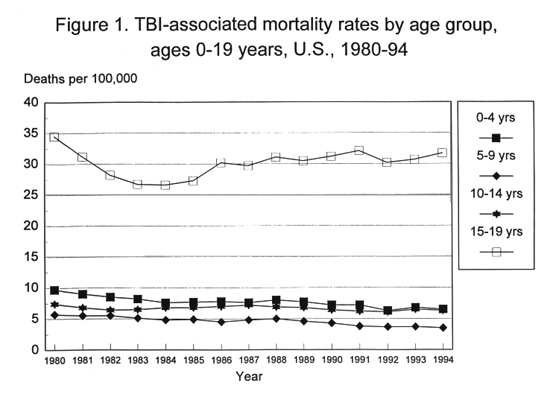 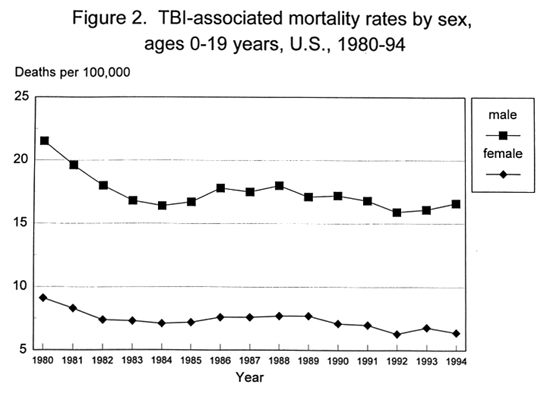 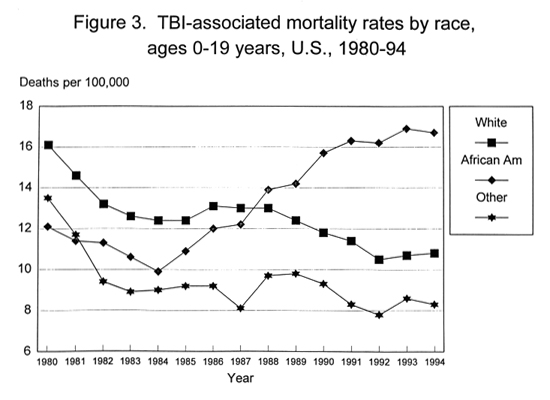 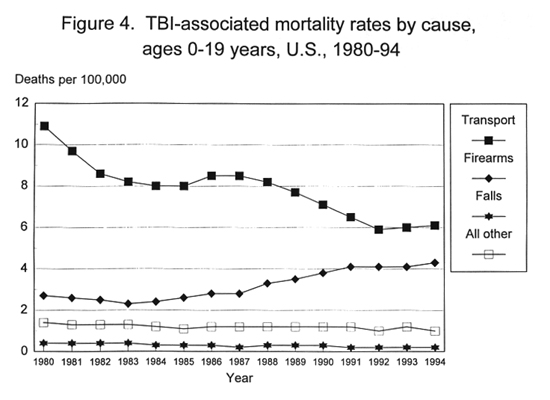 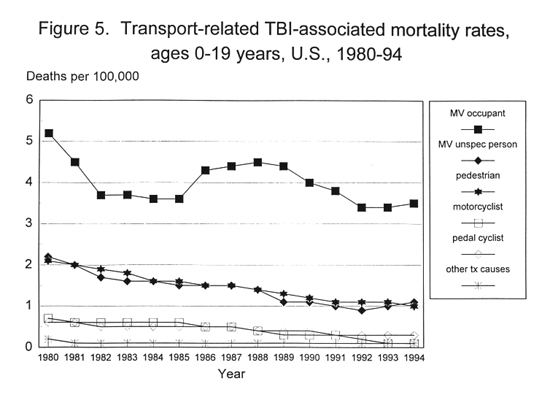 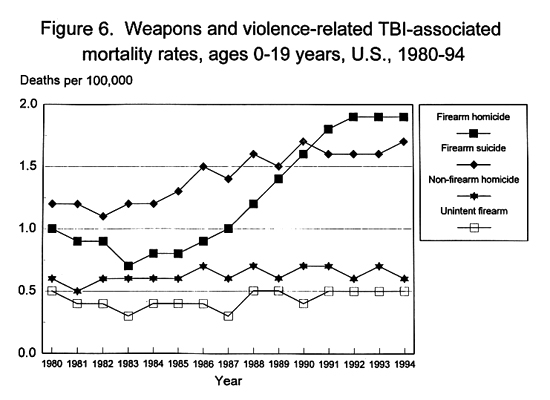 Figure 7. Percent of TBIs by cause of injury among fatal cases only compared to hospitalized cases plus out-of-hospital deaths, ages 0-19 years, 1994

Back to Table of Contents | Next