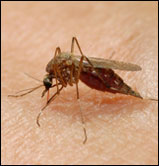 The parasite is injected into an individual by the bite of an infected mosquito. The nature of the malarial parasite and its means of transmission puts at least 41 percent of the world’s population at risk for malaria infection, making malaria one of the world’s leading health concerns.

Researchers at the NICHD’s Laboratory of Developmental and Molecular Immunity, in partnership with researchers in the Malaria Vaccine Development Branch of the National Institute of Allergy and Infectious Diseases (NIAID), and the Biotechnology Unit of the National Institute of Diabetes and Digestive and Kidney Diseases (NIDDK), have taken a new approach to combating malaria that could have a significant impact on the deadly disease.

A new vaccine could help to eliminate malaria from entire geographic regions, by eradicating the malaria parasite from an area’s mosquitoes. After feeding on the blood of a person who had been vaccinated, the mosquito’s digestive tract would reject the malarial parasite, thus limiting the spread of the disease.

For more information on malaria, check out the following resources: