Research for a Lifetime: Commemorating the NICHD’s 50th Anniversary 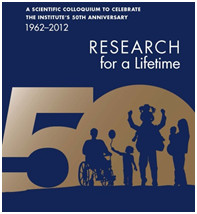 In 1961, Dr. Robert E. Cooke, the chair of the pediatrics department at Johns Hopkins Hospital and senior medical advisor to President John F. Kennedy, led a Presidential Task Force on the health and well-being of children. The task force submitted a report to the President pointing out the lack of research on the physical, intellectual, and emotional growth of children and recommending the establishment of an organization to investigate disorders of human development, including intellectual and developmental disorders (IDDs).

With the impetus of the Task Force report, Congress established the National Institute of Child Health and Human Development within the NIH to investigate human development at all its stages, from pre-pregnancy to adulthood, including IDDs and events of pregnancy. With President Kennedy's signature, the Institute was officially founded on October 17, 1962.

As the Institute marks its golden anniversary, we look back on the NICHD's early years, its scientific accomplishments, and its future. For more information, select a link below.

Much has changed in the 50 years since the NICHD came to be. For example:

Many of these changes have resulted from research from the NICHD and other NIH Institutes.

You can visit Events in NICHD History and the Institute Mission and Accomplishments for details on its 50 years of science. Additional information about some significant science within the NICHD portfolio and events in NICHD history is available at:

Research for a Lifetime

To commemorate its golden anniversary, the NICHD is hosting a scientific colloquium on December 5, 2012, in Masur Auditorium on the NIH main campus. The day's agenda features two Nobel Prize winners, the NIH and NICHD Directors, previous Institute leaders, and renowned scientists.

The Colloquium begins with past meeting present: a video interview between Dr. Alan Guttmacher, the current NICHD Director, and Dr. Robert Cooke, whose 1961 Task Force Report on the Health and Well-Being of Children contributed to the NICHD's founding.

The event will also include remarks by include:

For a complete schedule of the day's events, see the Colloquium Agenda.

The full day's events will be available to view through the NIH Videocast website in the weeks after the Colloquium.

Read the Research for a Lifetime: The Journey Forward text alternative.

Read the Research for a Lifetime: A Scientific Colloquium To Commemorate the NICHD's 50th Anniversary text alternative.

Read the A Conversation with Dr. Robert Cooke text alternative.

The Institute will also release its Scientific Vision at the 50th anniversary event.

The Vision statement was created in collaboration with Institute colleagues in the research, health care provider, and public policy, public health, and advocacy communities following an in-depth discussions to identify the most promising scientific opportunities of the next decade across the breadth of the NICHD mission. The Vision sets an ambitious research agenda not only for the NICHD, but also for the Institute's collaborators and stakeholders.

A primary feature of the Vision is that it requires intra- and inter- -Institute, interagency, interdisciplinary, and international collaboration to accomplish these scientific goals. In addition, the Vision aims to capitalize on best practices and cutting-edge technologies while encouraging innovation and creativity.

The Vision will help inform an Institute-wide strategic planning process, which will commence early in 2013.

For more information on the NICHD and the 50th anniversary colloquium, select one of the links below: