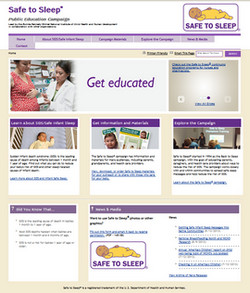 Reducing infant mortality has been an important part of the NICHD mission since it was founded. Despite decades of research, however, Sudden Infant Death Syndrome (SIDS) remains the leading cause of death among infants between 1 month and 1 year of age in the United States, causing more than 2,000 infant deaths each year.

In 2012, the NICHD, with the support of its campaign collaborators, created the Safe to Sleep® campaign as an extension of the highly successful Back to Sleep campaign to better address the changing landscape of infant mortality. Unlike the earlier campaign, which began in 1994 and focused primarily on ways to reduce the risk of SIDS, the expanded Safe to Sleep® campaign addresses ways to reduce the risk of SIDS as well as other sleep-related causes of infant death, such as accidental suffocation.

Since the expanded campaign began, Safe to Sleep® has set about to revise its messages and materials with evidence-based ways to reduce the risk of SIDS and other sleep-related causes of infant death based on the recommendations of the American Academy of Pediatrics (AAP).

Today, the Safe to Sleep® campaign is excited to announce the launch of the campaign’s new website: http://safetosleep.nichd.nih.gov.

The site reflects the expanded focus of the campaign and provides a “one-stop shop” for all things Safe to Sleep®. For example:

Visit the new Safe to Sleep® website—http://safetosleep.nichd.nih.gov—to learn more about the campaign, about ways to reduce the risk of SIDS and other sleep-related causes of infant death, and about how to spread safe sleep messages in your community.