“Dr. Stratakis brings extensive research experience and a broad clinical background to the position,” said NICHD Director, Alan E. Guttmacher, M.D.  “While there were an impressively large number of extremely well qualified applicants for this position, it was clear that—even apart from his outstanding performance as Acting Scientific Director—Dr. Stratakis was the candidate best suited to lead the intramural program over the coming years.” 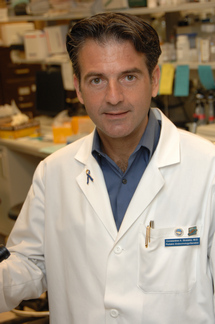 As the NICHD’s Scientific Director, Dr. Stratakis will oversee the research programs of 85 scientific investigators and more than 300 trainees.  The NICHD DIR is made up of 11 research programs with approximately 79 units and sections.  The objective of the DIR is to ensure the birth of healthy infants, to ensure the health of infants and children as they develop into adulthood, and to optimize the health of women.  Research in the DIR focuses on acquiring information to enhance understanding of the full range of human development and reproduction.

“I am humbled to have been chosen to lead one of the largest, most distinguished, of the NIH’s intramural programs, but I am also looking forward to it,” Dr. Stratakis said.  “I have already served in an acting capacity for more than two years, but every day I discover new things at NICHD and feel great admiration for the variety and strength of the research taking place within the division.”

A native of Greece, Dr. Stratakis received his M.D. and D.Sc degrees from the University of Athens.  He trained at the Hospital Cochin in Paris, France, before coming to the NICHD, first as a student, then as a Visiting Research Associate, and then as a Research Fellow.  He completed his pediatrics residency, as well as fellowships in pediatric endocrinology and clinical genetics, at Georgetown University.  In 1996, he returned to the NICHD as a senior fellow, was promoted to staff scientist in 1997, and appointed tenure track investigator in 1998.

Dr. Stratakis’ is well known for the identification and characterization of the gene for Carney complex, a disorder that increases the risk for benign tumors of the heart and adrenal glands.   In subsequent work, he deciphered the genetic underpinnings of a number of other endocrine disorders, among them primary pigmented nodular adrenocortical disease, a rare disease affecting the adrenal glands, as well as a class of disorders causing overgrowth of the adrenal glands (bilateral adrenocortical hyperplasias).

Dr. Stratakis is the director of the NICHD’s Program in Developmental Endocrinology and Genetics.  Within that program, he heads the Section on Genetics and Endocrinology, which seeks to understand the genetic and molecular mechanisms leading to disorders that affect the adrenal cortex.  Dr. Stratakis and his colleagues in the section focus on tumors and other abnormalities of the endocrine glands.  Recent studies by his group have determined that variations in a gene phosphodiesterase 11A appear to increase the risk for tumors of the adrenal glands, testes, and prostate.  Other recent work by the group has identified variations in a gene for a part of the enzyme succinate dehydrogenase as leading to rare tumors of the digestive tract, called gastrointestinal stromal tumors (GIST).  In previous work, he and his mentor and friend, J. Aiden Carney, showed that abnormalities in genes for other parts of the succinate dehydrogenase molecule underlie the rare, tumor-causing disorder later named for the two scientists, Carney Stratakis syndrome.

Dr. Stratakis has written or co-written more than 300 publications, and received numerous awards, including the Ernst Oppenheimer Award, one of the highest honors for scientists in the field of endocrine research.  Regarding his work at the NICHD, as well as other aspects of his life, Dr. Stratakis said he’s often guided by a quotation by Albert Einstein, first related to Dr. Stratakis by a mentor.

“Albert Einstein stated: ‘There are only two ways to live your life.  One is as though nothing is a miracle.  The other is as though everything is a miracle,” Dr. Stratakis said.  “I am honored to have been chosen to lead the NICHD Intramural Division.  The accomplishments of the institute are nothing short of miraculous.”

Since its establishment, he noted, the NICHD has supported or conducted the research which greatly reduced the infant death rate, reduced the transmission of HIV from mother to child, and nearly eliminated intellectual disability from such causes as Haemophilus influenza type B, congenital hypothyroidism, and the genetic disorder phenylketonuria, advanced reading research, improved knowledge of learning disabilities, and improved drug safety testing for children and pregnant women.

“In the Division of Intramural Research, the miracle makers are the staff scientists and trainees,” Dr. Stratakis said.  “From vaccine development to genomics, from reproduction to regenerative medicine, from the neurosciences to biophysics and imaging, they develop their hypotheses and patiently test them, setting the stage for tomorrow’s miracles.”