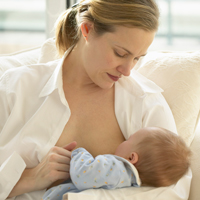 Breastfeeding provides many benefits for both mother and baby.

The NICHD and other agencies and organizations encourage mothers to breastfeed their babies to capitalize on the many benefits it provides.

, and the World Alliance for breastfeeding Action celebrates the first week of August as World Breastfeeding Week

According to the Centers for Disease Control and Prevention, only 16.3% of infants in the United States are exclusively breastfed until they are 6 months of age, far lower than the Healthy People 2020 goal. Understanding why mothers do or don't breastfeed is critical for developing effective programs to support and encourage breastfeeding.

As a follow-up to a 2012 conference on breastfeeding, NICHD researchers, grantees, and other conference participants published a scientific article identifying and addressing issues related to the production of human breast milk, the mechanisms by which it affects infant health, and other questions surrounding the practice of breastfeeding. The authors also suggest future research directions and training opportunities, which can help inform research activities. For more on this paper, visit Lactation and neonatal nutrition: defining and refining the critical questions.

The impact of immigration status and ethnicity on whether or not women breastfeed their babies is also being studied. Data collected on mothers and fathers in a longitudinal study showed that mothers born in the United States had an 85% reduction in breastfeeding as compared to foreign-born mothers. The study also noted that each additional year of residency in the U.S. decreased the odds of breastfeeding. Read more about this study at: Couples immigration status and ethnicity as determinants of breastfeeding.

Research has shown that breast milk provides many health benefits for a growing infant, including protection against certain infections. NICHD researchers are working to understand the full range of those benefits by studying the bioactive components of breast milk, and how they may change overtime. This would add insights into both the short and long-term benefits of breastfeeding.

As overweight and obesity continue to impact health worldwide, researchers are looking at the role that breastfeeding—or more specifically, breast milk—plays in this health issue. Previous studies indicated that breastfed children were less likely to become obese in early life compared to children who were fed formula. To better understand this relationship, researchers looked at a specific breast milk protein, adinopectin. Study results showed that high levels of adinopectin in breast milk were associated with lower weight during an infant's first 6 months. At the same time, these high protein levels were associated with accelerated weight gain during the second year of life, suggesting that adinopectin may play a role in catch-up weight gain after initially slowing weight gain. These results can help scientists pinpoint the specific components of breast milk that might help prevent or contribute to obesity. Learn more about the research: Human milk adiponectin affects infant weight trajectory during the second year of life.

Among the important components of breast milk is a group of compounds called oligosaccharides, short chains of sugar molecules joined together by chemical bonds. Previous research, including NICHD-supported work, indicates that these compounds play an important role in developing an infant's natural defenses against bacteria and viruses that infect the intestines. Oligosaccharides and their related components may also prove useful as a basis for developing novel preventive and therapeutic agents that inhibit disease by various pathogens. Visit Neonatal protection by an innate immune system of human milk consisting of oligosaccharides and glycans for more information about some of this research. The Institute continues to support studies in this area to better understand the role of oligosaccharides and other bioactive components in breast milk, including a recent Workshop on Bioactive Glycans in Human Milk.

Despite its rich nutritional content, breast milk alone cannot meet the iron needs of a growing infant. Infants born with low levels of iron may be at an increased risk of iron deficiency from exclusive breastfeeding without iron supplementation or some other intervention. The most effective intervention remains unknown. NICHD researchers conducted an intervention trial to study iron deficiency in breastfed infants between 5.5 months and 9 months of age. Results of this study are still pending. Find out more about this trial at Prevention of Iron Deficiency in Breastfed Infants.

Researchers are also studying how breast milk and its composition might play a role in maternal mental health. Data indicate that a type of fatty acid, called docosahexanoic acid (DHA), is linked to positive maternal mental health and to optimal brain development in growing infants. To learn more, researchers compared the concentration of DHA in breast milk for both mothers who showed symptoms of depression at varying levels. Mothers in the study who reported increased symptoms of depression within the first 20 weeks of their pregnancies were later found to have lower concentrations of DHA in their breast milk. However, researchers did not find the same association between DHA levels and symptoms of depression that may have occurred later in pregnancy. These findings may lead researchers to re-examine the best timing and methods for depression screening and intervention during pregnancy. Learn more about this research at Depressive symptoms during pregnancy and the concentration of fatty acids in breast milk.

Breastfeeding is not recommended for women who are infected with HIV in the United States because of the risk of transmitting the virus to their infants through breast milk. In resource-limited settings, however, often formula feeding is not a practical or safe option, and mothers in such settings risk their infants dying from infectious diseases or malnutrition if they do not breastfeed. Therefore finding safe and effective treatments to prevent the transmission of HIV through breast milk in resource-limited countries is paramount and has been an important focus of NICHD research.

Observational studies and randomized clinical trials have indicated that administration of nevirapine (NVP), a drug used to treat HIV/AIDS, to infants significantly reduces HIV transmission through breast milk. Learn more about these findings at Pooled individual data analysis of 5 randomized trials of infant nevirapine prophylaxis to prevent breast-milk HIV-1 transmission. A similar study that adds NVP to the regimen given to newborns of women diagnosed with HIV halves the newborns' risk of contracting the virus. Find out more information on this study at Three postpartum antiretroviral regimens to prevent intrapartum HIV infection. Additional studies have shown that provision of anti-HIV treatment to breastfeeding mothers also can reduce HIV transmission to the infant through breast milk. Learn more about these findings at Triple antiretroviral compared with zidovudine and single-dose nevirapine prophylaxis during pregnancy and breastfeeding for prevention of mother-to-child transmission of HIV-1 (Kesho Bora Study): a randomized controlled trial. An ongoing study in Africa is comparing whether infant NVP or maternal treatment is more effective in reducing breast milk HIV transmission and their safety. Read more about this study at: The "PROMISE" of Research.

Pending the results of this trial, newly revised 2013 recommendations of the World Health Organization state that, in resource-limited countries, all women infected with HIV who are breastfeeding should receive anti-HIV treatment for the duration of breastfeeding and their infants receive 6 weeks of infant NVP. For more information see http://www.who.int/hiv/pub/guidelines/arv2013/en/index.html

However, neither infant NVP nor maternal anti-HIV treatment can completely eliminate the risk of HIV transmission to the infant through breast milk from an infected mother. Therefore, in the United States, where clean water and safe affordable formula feeding is available, the American Academy of Pediatrics recommends that mothers infected with HIV should not breastfeed their infants, even if the mother or infant is receiving anti-HIV drugs. See HIV-infected mother should not breastfeed, even if taking antiretroviral drugs: policy

for more information. This is because HIV transmission rates to the infant can be as high as 5% through breastfeeding despite anti-HIV drugs, and should the infant become infected despite anti-HIV therapy, the infant may develop infection with virus that is resistant to drugs used to treat HIV Therefore, in the United States, the America Academy of Pediatrics recommends formula feeding as the best and safest infant feeding option for mothers infected with HIV. Learn more about this research at: Impact of maternal and infant antiretroviral drug regimens on drug resistance in HIV-infected breastfeeding infants.

The NICHD supports and conducts a wide variety of research to understand how breastfeeding and breast milk affect the health of mothers and infants. These efforts help support larger public health goals of raising awareness of the importance of breastfeeding and increasing the number of mothers who breastfeed.

For more information on breastfeeding and NICHD research, select one of the following links: