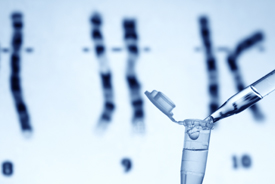 The NICHD has been supporting and conducting research on Fragile X syndrome, the most common inherited form of intellectual and developmental disabilities (IDD), for many decades. This research has given way to multiple clinical trials of drug treatments for Fragile X, a concept that brings hope to millions of families.

But the story of Fragile X syndrome is also a tale of the promise of scientific research and embodies a driving principle for the NIH—bringing research from the laboratory into everyday life, sometimes called from "bench to bedside." National Fragile X Awareness Day provides a good opportunity to examine the journey from basic research to possible treatment, so we know how far we’ve come and can see how far we have yet to go.

The story actually begins in the early 1900s when scientists made some general observations about heredity—how certain features are passed from one generation to the next. The basics of simple genetics were first published in 1865, but scientists didn’t publish the first chromosome map until 1911 (DNA wouldn’t be discovered until 1940). It was around this time that the scientific understanding of heredity really began to expand. There was even a name for the basic unit of heredity—gene.

In 1916, a researcher published observational findings that more males than females had IDD. This finding suggested a possible hereditary component to some of these conditions, but its wasn’t clear how genes might be involved. Unlike some traits, which showed a clear genetic path from one generation to the next, IDD showed a variable path, sometimes skipping generations or family members in ways that existing genetics knowledge couldn’t explain. Even as late as the 1930s, when other published research supported the idea that IDDs were observed in more males than females, there was no simple answer for how genes might be involved. When researchers described a family who had IDD linked to the X chromosome in 1943, scientists realized that the genetic component was actually a sex-linked gene.

In 1969, researchers reported a "marker X chromosome" associated with IDD in a certain family. The marker actually looked like a small lollipop had been stuck into the end of the chromosome by its stick. Within the family, those with IDD had the lollipop; those without IDD did not. In 1970, scientists gave the lollipop stick a name—they called it a "fragile" site because it was very thin and looked in danger of breaking off from the rest of the chromosome. The fragile site was a gap or thin area of the chromosome where breaks or errors were likely to occur. This specific site was named FRA(X), or fragile site on the X chromosome, and was known to be associated with IDD, then called mental retardation. The condition came to be known as "Fragile X syndrome" because of the fragile site on the X chromosome.

Zeroing in on Fragile X Syndrome

Researchers then worked to pinpoint the gene responsible for FRA(X) as a way to possibly prevent the fragile site from developing. In 1991, NICHD-supported researcher Steve Warren and his colleagues identified the gene responsible for the fragile site on the X chromosome as the FMR1 gene, or the Fragile X Mental Retardation 1 gene. A change, or mutation, in the FMR1 gene caused a cascade of events that led to the IDDs associated with Fragile X syndrome. The team found that the change in FMR1 was an entirely different mutation than had ever been described before. Unlike other diseases, which were known to result from an error at a specific base or point in the genetic code, Fragile X resulted from a "triplet repeat"—three bases of genetic code that repeated and repeated, getting longer and longer until they disrupted the function of the gene and caused the fragile site on the chromosome. A longer repeat meant greater disruption in the function of the gene.

The discovery of the gene marked a period of rich discovery related to Fragile X syndrome and including:

This last discovery opened up an entirely new avenue for understanding Fragile X syndrome and how its symptoms come about. This and other research led to the "mGluR Theory"—that exaggerated signaling in mGluR pathways because of missing FMRP leads to the various symptoms of Fragile X syndrome.

The mGluR Theory also provides one of the most promising mechanisms for potential Fragile X treatments. Using an mGluR "antagonist," which essentially blocks the receptors and prevents the exaggerated signaling, researchers were able to "rescue" mice with features of Fragile X syndrome. The antagonist drugs reduced the mGluR signaling, which also improved the Fragile X-like symptoms.

In 2008, Phase I clinical trials of these antagonists began in healthy human volunteers, with support from the NICHD, the National Institute of Mental Health (NIMH), the National Institute of Neurological Disorders and Stroke (NINDS), and the patient advocacy organizations Autism Speaks and FRAXA. The results have been promising and show the drug was safe and well tolerated. In May 2010, Phase II trials of the drug began in adults with Fragile X syndrome, and several sites are recruiting participants. If the results from these adult trials show promise, the drug can be tested in clinical trials with children. The NICHD, through its Best Pharmaceuticals for Children Act activities, will add its support to that of the NIMH and other Institutes and organizations for the pediatric clinical trials.

Studies of other possible treatments for Fragile X are also underway. Hopes are high that these drugs might usher in a new era in which Fragile X syndrome becomes a treatable condition. For a complete listing of clinical trials, visit http://www.clinicaltrials.gov/ct2/results?term=fragile+x.

Researchers have also found that problems with the FMR1 gene can lead to symptoms other than IDD. Some women with the mutated FMR1 gene have Fragile X-associated Primary Ovarian Insufficiency, which makes it hard for them to conceive a child. Others with the mutated gene develop Fragile X-associated Tremor/Ataxia Syndrome, which encompasses problems such as intention tremor (shaking in the hands when reaching for something), balance problems, and memory loss, that start to occur around 50 years of age.

As a group, problems associated with the FMR1 gene mutation fall into the research portfolios of multiple NIH Institutes, including the NICHD, NIMH, NINDS, and the National Human Genome Research Institute. To help coordinate research on FMR1, the NICHD leads the NIH Fragile X Research Coordinating Group, which includes nine NIH Institutes with research interests on different aspects of Fragile X. The Group consulted with outside experts and published a long-term agenda for FMR1 research,called the NIH Research Plan on Fragile X Syndrome and Related Disorders, in 2008.Finding treatments and supporting families impacted by Fragile X and its related disorders are major goals of the Plan.

The NIH is committed to continuing to learn as much as possible about the FMR1 gene and its far-reaching effects. The story of Fragile X might also serve as an effective and useful model for studying other diseases, and for moving research discoveries from the laboratory into everyday life.