Genomics research and improving the health of children, adults, families, and populations 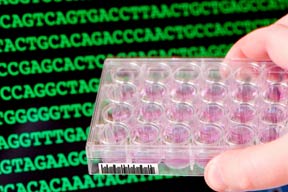 Most people know that genes shape certain characteristics, such as eye color and height.  Many are also aware that genes are involved in risk for certain diseases, such as high blood pressure and cancer.

What is becoming more and more apparent is that genes also play an important role in the treatmentof disease.  A person’s specific genetic makeup can impact how well the body responds to a medicine or treatment.  So the medicine itself is only one part of the treatment equation—to be successful, treatments must also factor in a person’s genetic information.

“Genomics” research is directly responsible for this new perspective on health and medicine.  Unlike genetics, which is the study of single genes and their effects, genomics studies the functions of and interactions among all the body’s genetic and non-genetic factors.  Since 2003, when researchers finished recording details of a full set of the nearly 20,000 genes people have—the human genome—the field of genomics has yielded many major advances.  But even more importantly, genomics has the potential to revolutionize how we approach medicine and health care.

“We are just at the dawn of the genomics era,” said Dr. Alan Guttmacher, Acting Director of the NICHD.  “We are only starting to learn about where genomics might be able to take us in terms of diagnosis and treatment and, eventually, prevention.”

Recently, Dr. W. Gregory Feero, of the National Human Genome Research Institute (NHGRI), and Dr. Guttmacher launched a series of articles about advances in genomics for the New England Journal of Medicine.  This series, a followup of sorts to a 2002 series on genetics, explains genomics, outlines early trends in genomic medicine, and highlights practical applications of genomics research findings.  Dr. Guttmacher shared some of his thoughts on genomics and how it might shape the future of research and health.

Technological advances have made it cheaper and easier to map a person’s genome and to compare genomes across large populations.  As researchers use genomics to identify genetic vulnerability to particular diseases, how health care providers think about providing care and treatment will also change within the context of genomics.

“We are already seeing the influence of genomics in clinical care.  Clinicians not only consider knowledge about a patient’s genome, but also the genetic makeup of certain diseases, like certain cancers, in making treatment decisions.  That knowledge can lead them to handle or treat cancer differently in one person than in another.”

Genetic research has revealed a lot of information about disease and health—especially about diseases that result from a single-gene problem.  Genetics is very effective at explaining aspects of single-gene diseases, which are often relatively rare from a population perspective.  In fact, newborn screening relies on this type of genetic testing by searching for specific, but uncommon conditions like Phenylketonuria (PKU).

But diseases are often the result of multiple factors—they result from a complex interaction among genes, chemical pathways, and other actors, such as viruses and environmental exposures.  By taking all of these factors into account, genomics research could be the key to understanding and then treating diseases.

For example, researchers discovered that both the mother’s and the baby’s genomes play a role in preterm birth.  They even identified certain genetic variances that increase risk for preterm labor and delivery.  This genomics data could enable scientists to more accurately predict who is at risk for a preterm delivery so that families and health care providers are prepared for the early birth.  Because preterm birth affects 13 million infants worldwide each year, such a discovery could significantly improve outcomes for millions of families, while also significantly reducing the cost of care.

“Another power of genomics is that it will eventually help us understand common diseases,” said Dr. Guttmacher.  “Examining a person’s genetic and non-genetic information will provide critical clues on diseases that impact large numbers of people.  But we realize that type of information will raise as many new questions as it will answer.”

Questions like—what do we do with all that data? When is the best time to use genomics technology? How should patients and health care providers approach care when genomics data is available?  How will genomics data influence prevention?

“Scientists no longer need to work hard to amass large amounts of data—gathering data is now the easy part.  The challenge now is how to analyze all that data.  It’s both cool and frightening to think about how much data is now available.  Analysis and bioinformatics tools will eventually provide both scientific and clinical advances.”

Knowledge in genomics is already changing the traditional approach to therapeutics by partially explaining why two people who get identical treatment for a disease can have such vastly different outcomes.  Like disease risk, the body’s response to disease is also controlled—to some extent—by genes and their interactions.

For example, researchers discovered that a genetic change can affect women’s response to a treatment for polycystic ovary syndrome (PCOS), among the leading causes of infertility in women.  People typically have two copies of each gene, providing a sort of “backup” in case one of the genes has a problem.  This research found that some women have a genetic variation in both copies of a specific gene, and those women did not respond well to a common treatment for PCOS.  Women who had one normal copy and one variation copy responded slightly better to the treatment, while women with two normal copies of the gene responded the best to the treatment.  For certain women, then, the current “best” treatment isn’t really best for them.

Dr. Guttmacher also explained that genomics has the potential to make a huge impact in rehabilitation medicine.  Gene-controlled body responses could explain differences in outcomes for rehabilitation from injuries, such as spinal cord injury or traumatic brain injury.  Even though genomics is less likely to be able to predict who will get injured or when, genomic data could greatly improve methods for rehabilitation by moderating individuals’ reaction to injury.

“It will take some time to figure out the specifics of the how and the why, but it will eventually change how we treat injury in both the acute phases and in the long term.  The challenge will be to understand how genetic factors influence mending from disease or injury.  Genomics provides our best scientific opportunity for this type of approach.”

Looking ahead, Dr. Guttmacher feels certain that genomics can change the course of medicine.

“I truly believe that, for children born today, knowing their genomics will have a significant impact on their health into adulthood.  Possibly in ways we have yet to imagine.”

For the full text of the article from Drs. Feero and Guttmacher, visit Genomic Medicine – An Updated Primer

(New England Journal of Medicine)); please note that the article includes an interactive Flash™-formatted graphic about DNA Sequencing Technologies. The Journal also has a blog about the series at http://blogs.nejm.org/now/

For more information on genetics and genomics, select one of the links below: