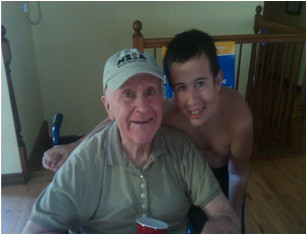 Based on this recent photo of Blaine with his best friend, his Grandfather, you’d never know he has a rare genetic disease.

In many ways, Blaine Grenon is a typical 15-year-old—he hangs out with his friends, likes pizza, and is planning for college. But in other ways, Blaine is far from ordinary.

Blaine has a rare genetic disorder called Menkes disease that he’s been living with since the day he was born. He and his family know first-hand how important research is to saving lives and improving health. Now they want to make sure other people know it too. Blaine and his family recently organized an event in his home town of Cumberland, Rhode Island, to raise money for research on the condition.

Menkes disease—sometimes called Menkes Syndrome—results from changes or mutations in the ATP7A gene that can lead to problems with how copper moves through the body. The body needs copper for many activities, such as making myelin, the insulating material that surrounds certain types of brain and nerve cells. In Menkes, copper might build up in some areas, such as the kidneys, but might be too low in other areas, such as the brain. Without enough copper, brain cells and other tissues can’t make myelin and carry out other important functions.

Menkes is a neurodegenerative disease, meaning that the effects of the copper imbalance get worse over time. Without treatment, usually in the form of copper injections, the disease can cause seizures, intellectual and developmental disabilities, growth delays, unstable body temperature, unusual hair color and texture, and death by three years of age.

Early detection and treatment offer the best long-term results for children with Menkes disease. Infants who are diagnosed and begin treatment within days after birth show the best outcomes. But because current newborn screening methods don’t detect Menkes and because its clinical symptoms are hard to spot in newborns, most infants don’t get diagnosed or treated early enough to benefit significantly from treatment.

Stephen Kaler, M.D., and his colleagues in the Unit on Human Copper Metabolism, within the Molecular Medicine Program of the NICHD’s Division of Intramural Research, lead efforts to understand and better manage Menkes disease, including early detection and diagnosis. In 2008, they reported the results of a long-term clinical trial on Menkes disease in the New England Journal of Medicine. The study relied on a blood test for detecting Menkes in at-risk newborns. That test showed promise for detecting the disease in infants at risk and may help in developing universal newborn screening efforts for the condition. 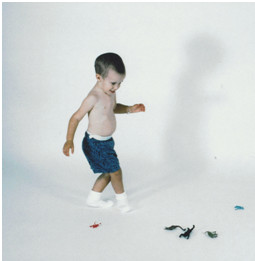 This photo of Blaine, taken when he was three years old at the NIH Clinical Center, foreshadowed his development into a healthy and thriving teenager.

It was knowledge about this risk that allowed Blaine to be diagnosed and treated quickly. The Grenons had a son before Blaine who died from Menkes at 7½ months of age. Because of the Grenon family history, Dr. Kaler and his colleagues tested Blaine for Menkes immediately after he was born. Blaine then began treatment with daily copper injections when he was just a few days old. The treatments continued until he was three years old and, according to Blaine’s mom, Marianne Ezovski, he’s been beating the odds ever since.

"Blaine is such an inspiration—not only to those he is trying to help, but he has been an inspiration to me as well.” said Marianne.

Research has shown that boys with Menkes disease respond variably to early copper treatments. Some patients, like Blaine, show great improvement, while others have minimal improvement or die despite the early intervention. When researchers studied the ATP7A gene, they found that those who responded best to early treatment had certain types of mutations in the gene. In Blaine’s case, a rare genetic phenomenon known as “native translational read-through” was identified by Kaler’s lab as the molecular basis for his successful treatment outcome.

Blaine and his family appreciate the positive impact that research has had on Blaine’s health and are determined to spread the word. Their recent event informed the community about Menkes disease and about the continued benefits of research. With local bands, food, and a raffle, it was a big hit in the community. The proceeds raised will be put toward Menkes disease research. The family has made the fundraiser an annual event, and the next one is scheduled for this June. Blaine is also doing well in school and is in the beginning stages of writing a book about his life.

"I would like to go to Providence College like my Grandpa did,” said Blaine. “I want to work with computers. And I want to help other boys so they don’t have to go through everything I have. I know I am very lucky, and my Mom has always done an excellent job managing the issues I have had."

While Blaine’s family continues its efforts to raise awareness about Menkes, researchers are working to improve the outlook for those who have Menkes. The goal is to find treatment options that work well for all ATP7A mutations responsible for Menkes and improve long-term outcomes. Initial results from brain-directed ATP7A gene therapy in a mouse model of Menkes disease in Kaler’s lab are highly promising.

In addition, the NICHD maintains a Menkes Disease and Occipital Horn Syndrome (OHS) International Registry. A registry about people with Menkes and OHS, a milder form of Menkes can help increase knowledge about these conditions and possibly identify new features of these diseases. This international database also helps to support patients and families around the world who are impacted by these conditions. These and other efforts will enhance understanding about Menkes Disease and could lead to new ways to diagnose and treat copper transport disorders.

For additional information, select one of the links below: