In Honor of Eunice Kennedy Shriver

Special event marks renaming of the Institute and its flagship research centers program in honor of Mrs. Shriver’s efforts and Her Induction into the NICHD Hall of Honor 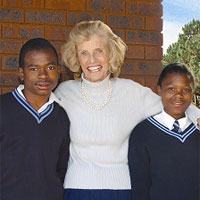 Eunice Kennedy Shriver, executive vice president of the Joseph P. Kennedy, Jr. Foundation and founder and honorary chairperson of Special Olympics, has been a leader in the worldwide struggle to improve and enhance the lives of individuals with intellectual and developmental disabilities for most of her life. Her vision and unrelenting efforts helped to establish the NICHD in 1962. In recognition of her dedication, Congress passed Public Law 110-154 on December 21, 2007, renaming the Institute as the Eunice Kennedy Shriver National Institute of Child Health and Human Development.

On March 3, 2008, Mrs. Shriver, her family, including her brother Senator Edward Kennedy, friends, and other special guests will formally recognize the Institute’s renaming during a special event on the NIH campus. During this event, the NICHD will also rename its flagship research centers program in Mrs. Shriver’s honor and will induct her into the NICHD Hall of Honor, which recognizes people whose accomplishments with or on behalf of the NICHD are especially noteworthy.

The following links provide more information about this event.