Research on Concussions: Keeping Your Head in the Game 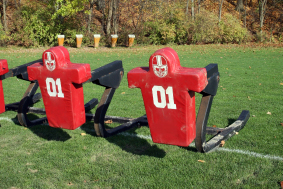 According to the Centers for Disease Control and Prevention, 1.6 million to 3.8 million sports- and recreation-related concussions occur each year in the United States. Rather than just a bump on the head, a concussion is actually a mild form of traumatic brain injury (TBI).

Don't let the word "mild" fool you—even a little bit of trauma to the brain can cause big problems with thinking or memory, movement or mobility, speaking or understanding, and personality or mood in the short and long term. Some research has also linked repeated head injuries to a long-term degenerative disease called chronic traumatic encephalopathy (CTE), which has symptoms similar to Alzheimer's.

Concussions and head injuries are not new to football, hockey, soccer, and other sports. Over the last few years, the National Football League (NFL) has actively emphasized the potentially serious short- and long-term effects of these injuries on players and their families. In 2008, when a high school football player in North Carolina died from head injuries he received on the football field, the question of how these seemingly mild injuries affect growing brains and bodies was brought into sharper focus.

Many of the specifics of concussions and head injuries remain unknown. How much force is required to cause a concussion? What is the best way to manage or treat concussions? Are there effective ways to prevent concussions? Even less is known about the effects of such injuries on a brain that is still growing and developing. What are the effects of a head injury received during adolescence on long-term learning, memory, and behavior? Are there ways to reduce or eliminate these effects? Does a head injury received in childhood have long-term effects on motor skills as well as behavior and learning? We simply don't know.

The NICHD conducts and supports research that can help to answer many of these and other questions about concussions and TBI, including their causes; their effects on brain function, motor skills, and behavior for different age groups; their management; and their outcomes. Select a link below to learn more.

Largely through its National Center for Medical Rehabilitation Research (NCMRR), the NICHD has long supported research on the full range of TBI—from mild injuries and concussions to severe TBI that causes significant disability. The Center, through programs including the TBI and Stroke Rehabilitation Program, supports a range of basic research to understand the cellular, molecular, physiological, and biomechanical processes associated with the full scope of TBI severity. These include studies on strategies that promote neural regeneration, recovery, plasticity, adaptation, and recovery of function after TBI.

The NICHD TBI research includes investigations that could lead to new and better ways of detecting and treating concussions. Some examples include:

Projects within the NICHD's dynamic scientific portfolio on TBI have led to significant advances related to concussions, including several specific to concussions in football and sports. Some of these advances are described below.

How does that helmet work?

Football helmets are designed to reduce the effects of head impacts and help protect players from injuries such as concussion. But consumers, including coaches, have no analytical information to compare the protective performance of different football helmets. Although the National Operating Committee on Standards for Athletic Equipment (NOCSAE) currently provides a set of voluntary standards, which involve "drop tests" to assess a helmet's ability to prevent skull fracture, consumers can only find out which helmets met the minimum standard on such tests. Currently there is no method that scientifically links the results from drop tests with a helmet's ability to prevent head injuries under real-world conditions.

Research supported by the NICHD allowed scientists to create the Head Impact Telemetry (HIT) System—a device mounted inside a football helmet that continuously measures, records, and evaluates head impacts during wear—to measure head acceleration and location of head impacts directly. In addition to providing a rich set of data about impacts, the HIT System also alerts sideline staff to any impacts that could have caused damage or that meet criteria for potential injury. Riddell®, the official helmet maker for the NFL, is collaborating with the makers of the HIT System to make the technology available to football players at all levels. Visit http://www.ncbi.nlm.nih.gov/pubmed/20351593 to learn more about the HIT System.

With support from the NICHD and the National Highway Traffic Safety Administration, scientists used data from HIT System studies to develop a new equation to help evaluate helmet performance. The Summation of Tests for the Analysis of Risk (STAR) equation relates on-field impact exposure to a series of 24 drop tests performed at four head impact locations and six impact levels. Using 62,974 head acceleration data points collected from football players, researchers developed a new injury-risk function—a statistical model—to help evaluate a helmet's performance by linking exposure and impact data to risk of concussion. The data were then combined into one measure that could predict exposure to and risk of injury for a single player for a full season of practices and games. The new STAR evaluation equation provides consumers with a meaningful way to assess the performance of football helmets and can help accelerate improvements in helmet design. For more information on STAR, visit http://www.ncbi.nlm.nih.gov/pubmed/21553135.

Although researchers, clinicians, coaches, and trainers have learned a great deal about the relationship between head collisions that occur during games and practices and the severity, duration, and type of injury and adverse outcomes, there is still more to learn.

For instance, many factors may play a role in the severity of injury, such as the number and severity of previous injuries, the force of impact, and the acceleration of the body after the impact. Developing a standardized method for measuring and analyzing head impacts and concussions could eventually lead to better ways of identifying and preventing them. A group of NICHD-supported researchers developed a new method of quantifying head impacts for college football players and used the data to analyze how the frequency, location, and magnitude of impacts vary across different player positions.

Using 314 players at three institutions, researchers recorded 286,636 head impacts during the course of three seasons. Running backs and quarterbacks received the most severe head impacts, although they suffered the impacts less frequently. Defensive and offensive linemen and linebackers had the greatest number of head impacts; however, these impacts were the least severe of all player positions. For more information on this finding, visit http://www.ncbi.nlm.nih.gov/pubmed/21911854.

In another NICHD-supported project, researchers used the HIT System (described above) to quantify head impact exposure by recording the frequency and location of impacts on the head received by individual players in one season. Using three college teams and 188 players, researchers collected information on 1,444 head impacts in one season, with an average of 6.3 impacts per practice and 14.3 impacts per game.

The study also found that the impact frequency and location differed by player position. Linemen and linebackers had the highest numbers of impacts per practice and per game. Most impacts occurred to the front of the helmet for all player positions except quarterbacks, who received the most impacts to the back of the helmet. Offensive linemen had the largest percentage of impacts to the front of the helmet. These data will provide the foundation for further research to quantify the frequency and magnitude of head impacts to understand the mechanisms that underlie head injuries. For more information, visit http://www.ncbi.nlm.nih.gov/pubmed/21062178.

Because the definition of concussion is so varied, it is hard to know exactly how many concussions occur in children each year. A group of NICHD-supported researchers set out to estimate the incidence of concussions in children who come to emergency departments in the United States. Using data from the National Hospital Ambulatory Medical Care Survey for the years 2002 to 2006, researchers estimated that 144,000 pediatric patients, ages birth to 19 years, presented to emergency departments with a concussion for each of the years studied.

In analyzing the results, researchers noted that the derived number likely underestimated the true incidence of concussion because the study used a somewhat conservative method that excluded individuals with related diagnoses (such as intracranial hemorrhage or unspecified head injury) unless they also received a diagnosis of concussion.

Among the pediatric patients that presented at emergency departments with concussions:

The study also found that concussions were more common among adolescents than they were among younger children. For youth ages 11 to 19 years with concussions, 41 percent were sports related, compared to only 8 percent for younger children. Visit http://www.ncbi.nlm.nih.gov/pubmed/20708747 for more information.

Through the NCMRR and other components, the NICHD will continue to help advance the science of preventing, identifying, treating, and managing concussions and all types of TBI.

For more information about NICHD research on concussions and TBI, please select one of the links below: