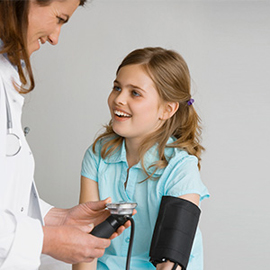 Hypertension and prehypertension may be undiagnosed and untreated among U.S. children and youth, despite repeated high blood pressure readings in doctor’s offices, according to an analysis of nearly 400,000 medical records.

The study, published in Pediatrics, was conducted by David C. Kaelber, M.D., Ph.D., of Case Western Reserve University in Cleveland and colleagues. The study was funded by the NIH’s Eunice Kennedy Shriver National Institute of Child Health and Human Development and the Health Resources and Services Administration.

Researchers reviewed the health records of 1.2 million U.S. children ages 3 to 18 from 1999 to 2014.  The children were patients in the196 pediatric primary care sites in 27 states that make up the Comparative Effectiveness Research Through Collaborative Electronic Reporting Consortium.  From this group, the researchers identified nearly 400,000 patients who had their blood pressure taken 3 or more times over an average of 62 months.

The findings suggest that many pediatric practices do not follow established guidelines for treating children with hypertension if the condition does not improve within 3 to 6 months. The researchers noted that diagnosing hypertension in children is difficult because the criteria for diagnosing the condition vary according to a child’s sex, height, and age.

The study authors suggested that pediatricians familiarize themselves with the guidelines for diagnosing and treating hypertension in children.