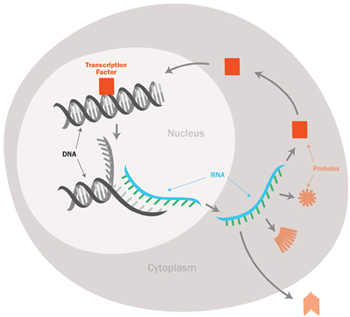 With the assistance of molecules known as RNA, the information stored on a gene’s DNA is eventually translated to make a protein. Some of these proteins, known as transcription factors, bind to DNA and control the timing of other genes—determining when they are activated or deactivated. This process is repeated, over and over, guiding the development of a fertilized egg as it becomes an embryo and then a mature organism.

A long-term grantee of the National Institutes of Health has been awarded the International Prize for Biology from the Japan Society for the Promotion of Science.

Eric H. Davidson, Ph.D., was recognized for his efforts in deciphering gene regulatory networks, the intricate sequences of genetic control switches that guide the formation of the embryo. Dr. Davidson is Norman Chandler Professor of Cell Biology, in the Division of Biology, California Institute of Technology in Pasadena.

“Eric Davidson’s work changed how researchers view the developmental process,” said Dr. James Coulombe of the Developmental Biology, Genetics and Teratology Branch of the NIH’s Eunice Kennedy Shriver National Institute of Child Health and Human Development (NICHD). “Previously, researchers tended to look at genes in isolation, similar to studying a wall switch that controls a ceiling light. What this work has done is to change the frame of reference from a single switch to the wiring diagram of an entire house.”

Genes, made up of DNA, contain the information needed to make proteins. With the assistance of molecules known as RNA, the information stored on a gene’s DNA is eventually translated to make a protein. Proteins are complex molecules that play a number of roles. Some of these proteins, known as transcription factors, bind to DNA and control the expression of other genes—determining when they are activated or switched off. Other proteins are secreted and serve as signals to other cells to coordinate their activities. This process is repeated, over and over, guiding the development of a fertilized egg as it becomes an embryo and then a mature organism. Genes are activated, transcription factors are made, still more genes are either activated or deactivated, and so on.

“Even though all cells in the embryo have the same content of DNA, the really amazing part of embryonic development is that what starts as a single cell turns into an organized group of many specialized cells with each cell turning on the appropriate genes at the right times and places,” Dr. Coulombe said. “It is largely through gene regulatory networks that this developmental process is coordinated. 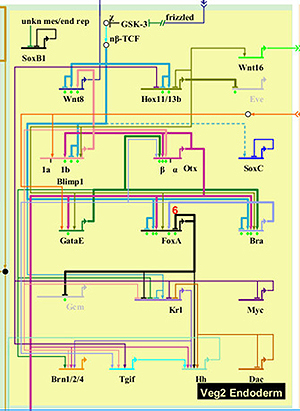 A screen capture of a small section of a sea urchin gene regulatory network mapped by Dr. Davidson and his colleagues, copied with permission from the website, http://www.biotapestry.org

For the last decade Dr. Davidson and his colleagues have been mapping these gene regulatory networks in sea urchins. His laboratory has used the purple sea urchin as a model for embryonic development of all animals, including human beings. Purple sea urchins produce hundreds of thousands, and sometimes millions, of rapidly developing embryos which are very easy to observe and study.

Dr. Coulombe said that an ability to understand, and, one day, to control these gene regulatory networks has important implications for a number of conditions and disorders. For example, understanding the networks that control embryonic and fetal development may lead to ways to treat or prevent birth defects and developmental disorders, thought to result from altered communications in gene networks during development. Similarly, an understanding of gene regulatory networks may allow researchers to program stem cells to replace damaged tissues, such as that which occurs after a heart attack or spinal cord injury.

“In recent years, computer DNA sequencing, and sensitive assay technologies have advanced to the point where we are poised to begin taking advantage of the information that Dr. Davidson and his colleagues have uncovered,” Dr. Coulombe said.

Information on the International Prize for Biology is available at http://www.jsps.go.jp/english/e-biol/index.html