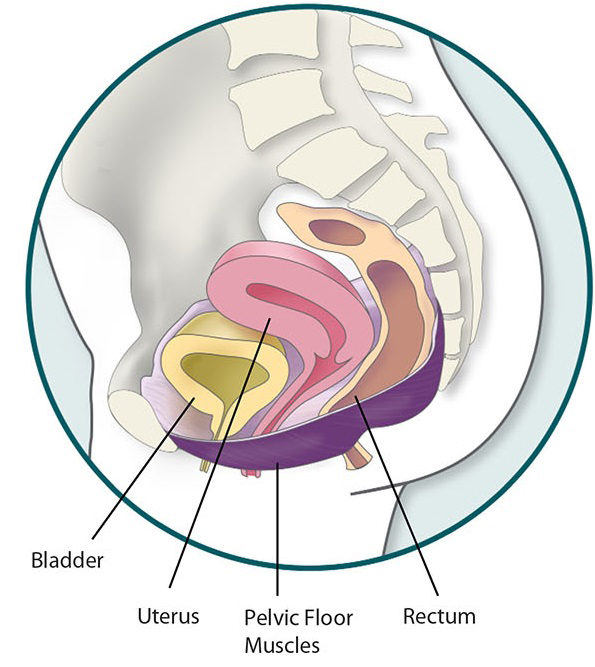 Illustration of the pelvic floor.

Our guest is NICHD’s Donna Mazloomdoost, program director for the Pelvic Floor Disorders Network. The network studies problems of the pelvic floor, the group of muscles and tissues that help support the bladder, bowel and, in women, the vagina and uterus. A pelvic floor disorder occurs when these muscles weaken or are injured. Symptoms include bladder and/or bowel control problems as well as other symptoms which we’ll get into during the podcast.

Estimates suggest that as many as one in three U.S. women will experience symptoms of a pelvic floor disorder in their lifetime, but still many women do not seek treatment or even talk to their health care providers about it.

Dr. Mazloomdoost, thanks for joining us.

Dr. Donna Mazloomdoost: Thanks for having me.

Ms. Daly: Can we start by telling us what these disorders are?

Dr. Mazloomdoost: Sure, it’s a composite of syndromes that can impact anything basically in the pelvic floor. Some women may actually have symptoms of bladder control problems, so going to the bathroom frequently, or urinary leakage. They may feel a bulge or pressure inside the vagina as their organs may actually be protruding into or out of the vaginal opening. And then others may also experience issues with bowel control

Ms. Daly: Do we know what causes these disorders?

Dr. Mazloomdoost: It’s very complicated. So, one of the big contributors is likely just your genetic makeup. So, having a family history and other things in your genetics is probably contributing. Some are impacted by having been pregnant or a vaginal delivery and others may just be spontaneous or related to other disease processes that a woman may have.

Ms. Daly: So why do you think women are so hesitant to talk about these disorders if they're so common?

Dr. Mazloomdoost: Probably the biggest reason is just their embarrassment because these conditions do tend to be embarrassing. And when they do feel comfortable enough talking to someone else about it, they probably hear something to the effect of ‘Oh that’s just what happens after you have kids or that’s what happens after you get older.’ And I had one patient who actually told me that she went jumping on a trampoline after she had her daughter and was having some leaking and thought ‘oh no,’ and mentioned it to a friend, and the friend said, ‘oh yeah, your trampoline days are just over after you have a kid.’ And these are the common things that we tend to hear and I think woman just assume these are normal processes that occur either after having kids or as you get older and to an extent, while they’re common, they’re still treatable. So, you shouldn’t have to adjust your lifestyle and adjust your activities because you’re having these conditions. I don’t believe anybody’s trampoline days need to be over after they have children should they still want to continue jumping on a trampoline.

Ms. Daly: What’s the level of pain and discomfort?

Dr. Mazloomdoost: So, most women actually don’t experience pain. There are conditions that are considered pelvic floor conditions that are associated with pain, but the vast majority of these pelvic floor conditions that we treat are not associated with pain. They produce more discomfort and quality of life issues. And, so, women will experience significant discomfort, for example from prolapse, whereas, they’ll feel as though there is something bulging in the vagina or coming out. Or they’ll describe feeling like they’re sitting on something consistently. In other disorders, such as an overactive bladder, where women are going to bathroom very frequently, it can tend to impact their life and their activities and sometimes women will actually stop doing certain things or even leaving the house because of how much it impacts what they can do.

Ms. Daly: So, it ranges from a real nuisance, an inconvenience that impacts your daily living, to something more pronounced, like prolapse. Can you explain what a Pelvic Organ Prolapse is?

Dr. Mazloomdoost: Sure. What happens in prolapse is that the support in the vaginal wall gets weakened and what can happen is actually the vaginal wall will start to get more relaxed or more loose and the organs behind them will also follow. So, you’ll notice a protruding of the vaginal wall down into the vagina and in more extreme cases it might actually come beyond the vaginal opening.

Ms. Daly: And this is something that as a doctor you can see?

Dr. Mazloomdoost: Absolutely. It’s pretty easy to see because it often times can be pretty pronounced by the time women come in to get evaluated.

Ms. Daly: What are the common symptoms or signs that should alert a woman that she should seek medical attention?

Dr. Mazloomdoost: In my opinion, I think it would be anything that provides discomfort and a disruption to your normal, daily activity. Any time that you experience any kind of discomfort or an impact on your quality of life you should be seen. But typically, in a prolapse situation, again, women will notice something that’s bulging. A bladder-control problem, they’ll notice either they’re going to the bathroom so frequently that it’s disrupting their routine or they’ll have leakage that potentially requires them to wear a pad or even a diaper at times, depending on the severity. So, the rule of thumb would be whenever it starts to impact your life, that’s when you should speak to a health professional.

Ms. Daly: And this is not something that’s just going to get better or go away on its own. There are treatments, correct?

Dr. Mazloomdoost: Correct. Often times, these do not get better just spontaneously.

Ms. Daly: What are the treatments? Can you explain?

Dr. Mazloomdoost: They can range from just doing conservative measures or even up to surgical interventions. So, for prolapse, one of the early interventions that can be done is physical therapy, which can help strengthen the muscles of the pelvic floor and that can help with the symptoms of support in the earlier stages. There are devices called pessaries, which are just plastic devices that can be placed while a woman is in the office and these can help hold the vaginal wall and the surrounding organs back up so that the woman doesn’t feel the discomfort. And then there’s surgical options, such as reconstructing the vaginal wall and reinforcing the support. For the bladder-control problems, often times we can start again with dietary changes, some lifestyle changes, and then physical therapy is also utilized. There are plenty of medications that can be used and then, again, if none of those options work for women, there are surgical options. And the same thing goes fir incontinence that is not related to an overactive bladder, but rather the leaking that can occur with sneezes, coughs, laughing, anything that increases the pressure inside the abdomen.

Ms. Daly : I’ve heard about fistulas. Can you tell us about what those are and what the treatments would be?

Dr. Mazloomdoost: Sure. Fistulas occur when there’s a connection between an organ and for example, the vagina. So, something that we call like a vesicovaginal fistula is a connection between the bladder and the vagina or a recto-vaginal fistula would be a connection between the rectum and the vagina. And these are some pretty morbid conditions that can cause continuous leakage of either urine or stool into the vagina. And these are common, more common in international areas, such as Africa where the health care and obstetrical care is not as advanced as we do have here. But there are medical conditions and certain surgeries and procedures that can also place women at risk for these. And so, it’s important that if you feel any kind of leaking or discomfort from these that you do be seen.

Ms. Daly: So, the Pelvic Floor Disorders Network that you oversee, includes clinical centers in 8 locations around the country. Can you tell us about some of the studies the Network is conducting now?

Dr. Mazloomdoost: Some of the biggest, impactful studies that have been done within the field of female pelvic medicine, reconstructive surgery have been from studies done by the investigators in the Pelvic Floor Disorders Network. So, these are large studies that span multiple sites and have compared treatment options for various conditions that we treat. So, some of the bigger studies have shown us the comparisons of particular surgical procedures. They’ve looked at adding incontinence procedures to, for example, prolapse surgery and the impact of that and whether we should do that for women. And so, a lot of the data that we know, and a lot of the treatments have been impacted by the studies that the Pelvic Floor Disorders Network has had and they’ve made a very big impact on the life of women with pelvic floor conditions.

Ms. Daly: Where would you like to see the research going and what areas are in need of more discovery?

Dr. Mazloomdoost: We’re still in need of treatments for prolapse, incontinence, as well as bowel issues, which is a newer area where we are actually spending a little bit more time and so there’s still a lot of research to be done and we’re exploring more innovative, newer treatments for these conditions so that again, we can help women get an improved impact quality of life.

Ms. Daly: Tell me a little about yourself and why you went into this field?

Dr. Mazloomdoost: I actually practiced general Ob-Gyn for 10 years and throughout my career, I started seeing more and more women returning for these conditions and I realized that we don’t have a lot of providers as of yet. It’s a newer, accredited field, though I think in terms of just individuals practicing it, have been around for many decades. It was something that I saw as a huge need and felt that I wanted to get more training on because one of the biggest things that I was seeing in my patient population was just women being afraid to even come forward and mention anything. They were embarrassed, and they were uncomfortable, and they didn’t know that treatments existed. And so, for me it was really important to help promote that and really start addressing these problems in women.

Ms. Daly: And just let women know that there are treatments and there’s nothing you have to deal with on your own.

Dr. Mazloomdoost: Correct. And I think that’s probably the biggest thing that we need to get out there is to make women aware that while they are common conditions, they’re treatable conditions, and therefore, you shouldn’t feel the need to suffer, you certainly shouldn’t be embarrassed because you did nothing wrong. This is something that actually occurs in probably more women than we’re even aware of.

Ms. Daly: Well thanks for taking the time to explain these disorders and the treatments and the research.

Dr. Mazloomdoost: Thank you very much for bringing attention to this important issue.

Ms. Daly: I’ve been speaking with Dr. Donna Mazloomdoost with the Gynecological Health and Disease Branch of NICHD. Thanks for listening to Milestones. I’m your host, Meredith Carlson Daly.