Screening programs may miss many cases of life-threatening newborn infection 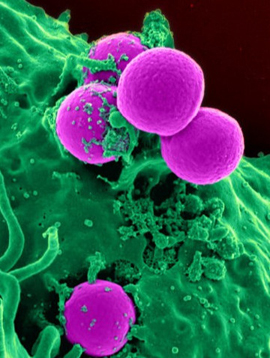 The drug-susceptible form of Staphylococcus aureus, a common bacterium that inhabits the body, may account for a greater number of infections among hospitalized newborns than the antibiotic-resistant form, according to researchers funded by the National Institutes of Health. The findings suggest that screening programs to identify children who may be at risk for S. aureus infection should include both forms of the bacteria, rather than focusing on the resistant variety. The study was published in JAMA Pediatrics.

S. aureus typically lives on the skin and inside the nostrils. In healthy people, S. aureus usually doesn’t cause disease. However, it can cause serious and sometimes life-threatening infections in people who are sick or injured, who have recently had surgery, or who have weakened immune systems. Preterm and undersized infants are particularly susceptible to blood infections from S.aureus and also may develop Staph meningitis, a serious infection of the membranes covering the brain and spinal cord. S.aureus also can cause pneumonia and skin infections. In recent years, some strains of the bacterium have become immune, or resistant, to methicillin, the antibiotic used to treat the infection.

The study was conducted by Jessica Ericson, M.D., of the Duke University School of Medicine and colleagues at other institutions. The researchers analyzed hospital records of newborns who had S. aureus infections in 348 intensive care units in 34 states to determine the predominant source of the infection: methicillin-resistant S. aureus (MRSA) or methicillin-susceptible S. aureus (MSSA).

For cases in which death records were available, 9.6 percent of infants with MSSA died (237 of 2,474) before leaving the hospital. Among infants with MRSA, 11.6 percent died (110 of 926).  Very low birth weight infants were more likely to die than were those born at higher birth weights.

“In adult patients, concerns have focused on MRSA, as it’s more difficult to treat,” said Rosemary Higgins, M.D., of the Pregnancy and Perinatology Branch of NIH’s Eunice Kennedy Shriver National Institute of Child Health and Human Development, which funded the study.  “This study shows that, among infants—particularly those who are preterm and extremely small—the non-resistant form of Staph presents an equally serious risk.”

The study authors note that some hospitals have programs to detect patients who are harboring MRSA, before they become infected. Such screening efforts not only benefit the patients, but also prevent the organism from spreading to other patients in the hospital. Once they identify the presence of MRSA, hospital staff can provide treatments to kill the bacteria before it can cause serious illness.

The researchers called for studies to identify factors that lead MSSA to cause serious infection.  Information from such studies might provide information that could help identify the patients at greatest risk so they can be treated before they develop an infection.