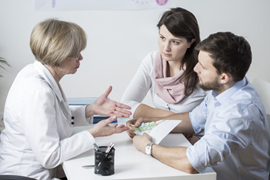 Women with polycystic ovary syndrome (PCOS) may store fat differently than women who don’t have the common infertility disorder, according to a study funded by the National Institutes of Health.

The study authors found that women with PCOS tended to accumulate fat around the internal organs of the abdomen. The women also were less likely to store fat beneath the skin surrounding the abdomen, buttocks, and thighs, compared to women who did not have the condition.  The PCOS patients all had high androgen levels, which the researchers believe could have influenced how they store fat and how their fat cells function.

According to the researchers, this altered pattern of fat storage may account for the higher risk for diabetes and heart disease frequently seen in women who have PCOS.  In the study, women with the condition used insulin less efficiently than other women and tended to have higher levels of the blood fats and cholesterol types that have been linked with heart disease.

The study appeared in the Journal of Clinical Endocrinology and Metabolism and received funding from the Eunice Kennedy Shriver National Institute of Child Health and Human Development (NICHD), the NIH Office of the Director, and the National Center for Advancing Translational Sciences.

PCOS can cause infertility in women and girls of childbearing age. Symptoms may include weight gain, ovarian cysts, high levels of hormones known as androgens, and absent or irregular menstrual periods. The high androgen levels may result in excessive body hair growth and acne. Women with PCOS also may have insulin resistance, which increases the risk for type 2 diabetes, heart disease, and high blood pressure.

The study was conducted by Daniel A. Dumesic, M.D., of the David Geffen School of Medicine at UCLA, and colleagues.

Because obesity may interfere with insulin use, the researchers enrolled only normal weight women in their study. A total of 6 women with PCOS took part, all of whom had high levels of androgens. The researchers also enrolled a comparison group of 14 women with similar characteristics, but who did not have PCOS.  All the women were between ages 18 and 35 years. Women in both groups underwent tests that included measures of their body fat distribution and composition, blood fat composition, and their degree, if any, of insulin resistance.

The two groups had roughly the same level of fat beneath the skin surrounding the abdomen. However, the characteristics of the fat from the women with PCOS were consistent with the fat characteristics that other studies have linked to insulin resistance, including greater proportions of the following:

Moreover, the women with PCOS had higher levels of the blood fats known to increase heart disease risk: triglycerides and non-HDL cholesterol. Although the PCOS patients did not have insulin resistance, they required more insulin than the other women to maintain normal blood sugar levels.

The researchers theorize that women with PCOS and higher androgen levels may be less efficient at processing glucose and storing fat, which leads to insulin resistance and higher triglyceride and cholesterol levels in the blood. They noted that a previous study found that PCOS patients who had normal androgen levels did not concentrate fat in the abdomen.

Though the findings do not offer immediate benefits for women with the condition, they provide important information for researchers seeking to identify the causes of PCOS and to develop ways to prevent or treat it.

“The women in the study were of normal weight, but they appeared to have early signs of the insulin and cholesterol problems that often accompany obesity,” said Louis De Paolo, Ph.D., chief of the NICHD Fertility and Infertility Branch, which supported the studies through its National Centers for Translational Research in Reproduction and Infertility Research. “The findings underscore what is often the first line of advice for women with PCOS: follow a healthy diet, keep weight down, and remain physically active.”

Because the study included a small number of PCOS patients, the researchers will need to confirm their findings in a larger sample of women with the condition.