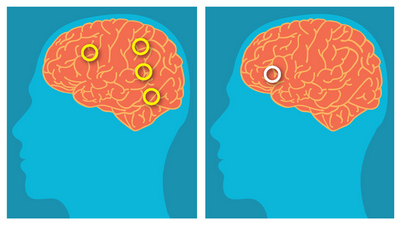 At left, brain areas active in typically developing readers engaged in a rhyming task. Shown at right is the brain area activated in poor readers involved in the same task.

Regardless of high or low overall scores on an IQ test, children with dyslexia show similar patterns of brain activity, according to researchers supported by the National Institutes of Health. The results call into question the discrepancy model—the practice of classifying a child as dyslexic on the basis of a lag between reading ability and overall IQ scores.

In many school systems, the discrepancy model is the criterion for determining whether a child will be provided with specialized reading instruction. With the discrepancy model, children with dyslexia and lower-than-average IQ scores may not be classified as learning disabled and so may not be eligible for special educational services to help them learn to read.

“The study results indicate that the discrepancy model is not a valid basis for allocating special educational services in reading,” said Brett Miller, Ph.D., director of the Reading, Writing and Related Learning Disabilities Program at the Eunice Kennedy Shriver National Institute of Child Health and Human Development (NICHD), the part of the National Institutes of Health that funded the study. “It follows that, whether they have high IQ scores or low IQ scores, children with great difficulty in learning to read stand to benefit from educational services to help them learn to read.” The study findings were published online in Psychological Science. The study was conducted by Fumiko Hoeft, M.D., Ph.D., of Stanford University, in Stanford, Calif., and colleagues at Boston College; York University, in Toronto; and the Massachusetts Institute of Technology, in Cambridge.

Originally, the U.S. Individuals with Disabilities Education Act required the use of the discrepancy model to identify those students who needed assistance for a learning disability. In the 1990s, studies showed that children who had difficulty learning to read had difficulty with phonological awareness— matching printed letters of the alphabet to the speech sounds that those letters represented. Based on these findings, the reauthorization of the Act dropped the requirement that school systems use the discrepancy model. Many school systems, however, retained the discrepancy model as a means to classify students needing special educational services in reading.

The current study showed that, when they engaged in tasks involving phonological awareness, children with dyslexia showed the same patterns of brain activation, regardless of whether or not they had high or low IQ scores in relation to their reading abilities.

To conduct the study, the researchers measured the brain activity of 131 typical and poor readers from schools in the greater Pittsburgh and San Francisco Bay areas, using functional magnetic resonance imaging scanners. The students were from 7 to 16 years old. Based on IQ testing, the students were classified into three groups:

The researchers imaged the children’s brain activity as the students looked at pairs of words on a computer screen and indicated whether they rhymed (bate and gait) or did not rhyme (price and miss).

After comparing scans from the three groups, the researchers found no basis for distinguishing between groups of poor readers based on their IQ scores.

“These findings suggest there is little reason to rely on the discrepancy model in the classroom any longer,” said Dr. Hoeft. “Regardless of IQ, all children with dyslexia should be eligible for support in learning to read.”