Variation in the BDNF gene may affect brain’s regulation of appetite, study suggests 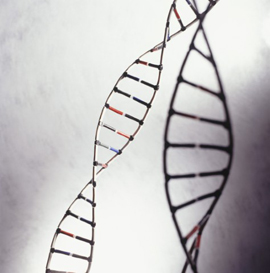 A single variation in the gene for brain-derived neurotropic factor (BDNF) may influence obesity in children and adults, according to a new study funded by the National Institutes of Health. The study suggests that a less common version of the BDNF gene may predispose people to obesity by producing lower levels of BDNF protein, a regulator of appetite, in the brain. The authors propose that boosting BDNF protein levels may offer a therapeutic strategy for people with the genetic variation, which tends to occur more frequently in African Americans and Hispanics, than in non-Hispanic Caucasians. The study is published in the journal Cell Reports.

Obesity in children and adults is a serious issue in the United States, contributing to health conditions such as heart disease, stroke and type 2 diabetes. Importantly, genetic factors can predispose a person to obesity, as well as influence the effectiveness of weight-loss strategies. The body relies on cells to process and store energy, and changes in genes that regulate these functions can cause an imbalance that leads to excessive energy storage and weight gain.

“The BDNF gene has previously been linked to obesity, and scientists have been working for several years to understand how changes in this particular gene may predispose people to obesity,” said Jack A. Yanovski, M.D., Ph.D., one of the study authors and an investigator at NIH’s Eunice Kennedy Shriver National Institute of Child Health and Human Development (NICHD). “This study explains how a single genetic change in BDNF influences obesity and may affect BDNF protein levels. Finding people with specific causes of obesity may allow us to evaluate effective, more-personalized treatments.”

The BDNF protein plays several roles in the brain and nervous system and, at high levels, the protein can stimulate the feeling of fullness. The study team, led by Joan C. Han, M.D., a former NICHD investigator now at the University of Tennessee Health Science Center, first analyzed the BDNF gene for naturally occurring genetic changes that alter levels of BDNF production. After analyzing brain tissue samples, the researchers identified an area of the gene where a single change reduced BDNF levels in the hypothalamus, a key area that controls eating and body weight.

The genetic change the researchers identified was not a rare mutation, but rather a variation that occurs in the general population. Every person has two copies, or alleles, of each gene, inheriting one copy from each parent. Alleles can vary at any location across the gene. In their study, the researchers referred to the common allele as “T,” and the less common allele, which produces less BDNF protein, as “C.”

Using this information, the researchers studied the BDNF gene in four groups of people, more than 31,000 males and females, enrolled in clinical research studies, including PAGE

, HANDLS and Viva La Familia. They compared a person’s BDNF gene combination—CC, CT or TT—to factors that define obesity, such as body mass index (BMI) and percentage of body fat. In African American adults, the team found that the C allele was associated with higher BMI and body fat percentage in those with CT or CC types. In a group of healthy children of many races, the researchers found that CC types had higher BMI scores and percentage of body fat when compared to CT or TT types, who were similar to each other. Finally, in a group of Hispanic children, the researchers found that the C allele (CT, CC types) was associated with a higher BMI score. Overall, the study suggests that the C allele of the BDNF gene may be linked to obesity in people.

To understand why the C allele has an effect on obesity, the study team carefully examined the genetic area that differs between C and T alleles. They discovered that the area of interest interacts with a protein called hnRNP D0B. In laboratory experiments, the team found that hnRNP D0B had trouble interacting with the C allele, resulting in less BDNF production. “Lower BDNF levels may contribute to obesity in people with the C allele. If these findings are supported by additional studies, boosting BDNF levels may prove beneficial,” said Dr. Han.