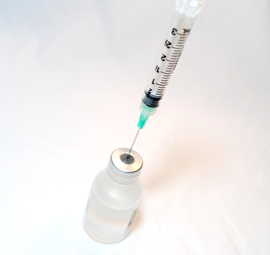 Children infected with HIV since birth benefit from two doses of the chickenpox vaccine, particularly when the first dose is given at least three months after the initiation of anti-HIV treatment, according to a study funded by the National Institutes of Health (NIH). The results were published recently in the journal Clinical Infectious Diseases.

In HIV-infected children, exposure to varicella zoster, the virus that causes chickenpox, can lead to a severe rash, pneumonia, hepatitis (liver inflammation), brain swelling, or death.

Currently, two doses of the chickenpox vaccine are recommended for children, with the first dose given between 12 to 15 months of age and the second dose between 4 to 6 years of age. The recommendations are similar for HIV-infected children, provided that the child has a healthy level of T-cells, an immune cell frequently wiped out by HIV infection.

However, some studies suggest that a large number of children with HIV may not be protected against chickenpox despite vaccination. For the current study, researchers sought to find the most effective way to protect children with HIV from the chickenpox virus. They compared children who, for various reasons, had received one, two, or no doses of the chickenpox vaccine from their healthcare providers, and measured antibodies generated by the vaccine. Antibodies are immune system proteins that protect against disease-causing organisms and can wane over time.

Researchers led by Murli Purswani, M.D., from the Bronx-Lebanon Hospital Center (Albert Einstein College of Medicine), studied two groups of children—those who had HIV since birth (432 kids) and those who had been exposed to the virus in the womb but were not infected (221 kids). The children were part of a larger study called the Pediatric HIV/AIDS Cohort Study (PHACS), which looks at the long-term effects of HIV and anti-HIV therapy in children from 15 sites across the United States and Puerto Rico.

“This study is the first to show that the current recommendation of two doses of the chickenpox vaccine produces long-lasting antibodies in children who have had HIV since birth and are receiving anti-HIV therapy,” said George K. Siberry, M.D., medical officer in the Maternal and Pediatric Infectious Disease Branch of NIH’s Eunice Kennedy Shriver National Institute of Child Health and Human Development (NICHD). “We detected antibodies more than seven years after vaccination, which is a much longer interval than shown in previous studies.”

The researchers also compared chickenpox vaccination to the timing of anti-HIV therapy, which should begin soon after diagnosis of HIV. Among children who received only one vaccine dose, those on anti-HIV therapy for at least three months were more likely to generate chickenpox antibodies compared to children who had less than three months of therapy.

The authors wrote that their study confirmed that the recommended two-dose schedule for chickenpox vaccination is beneficial in children with HIV, providing a longer lasting immune response compared to children with HIV who received only one dose. They added that giving the vaccine three months after beginning anti-HIV therapy also appeared to increase its effectiveness.

“Going forward,” emphasized Dr. Purswani from Bronx-Lebanon, “children with HIV should start anti-HIV therapy before receiving the chickenpox vaccine, and they should complete the two-dose series.” He said, “Continuing anti-HIV therapy over time maintains the effectiveness of the chickenpox vaccine. Our work provides strong support for starting therapy as soon as possible.”