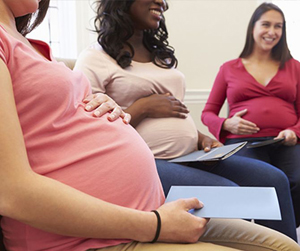 A woman's weight gain in the second trimester of a twin pregnancy is most closely associated with fetal growth and the size of the babies at the time of birth, according to a prospective study by researchers at the National Institutes of Health. The investigators also found that weight gain in the first and third trimesters is not linked to fetal growth or birth weight. The study results provide reassurance for women who fail to gain weight during the first trimester, often because of the greater likelihood of morning sickness in a twin pregnancy.

The study, appearing in the American Journal of Clinical Nutrition, was conducted by Stefanie Hinkle, Ph.D., and colleagues at NIH's Eunice Kennedy Shriver National Institute of Child Health and Human Development (NICHD).

The study authors noted that there is little information available to guide women pregnant with twins on how much weight they should gain in pregnancy and during which part of pregnancy they should gain it. Twin pregnancies place higher nutritional demands on women to, among other things, provide the additional blood volume and tissue needed to support another fetus.

Earlier studies have focused on the total amount of weight gained during twin pregnancies. Because most twins are born early, information on weight gain at the end of pregnancy is of limited use for advising and treating women earlier in pregnancy.

These findings underscore the importance of weight gain in twin pregnancies during the second trimester, given that many twins are delivered before a pregnancy has reached term. Compared to normal weight infants, low birth weight infants are at higher risk for health problems.

The findings provide important information for future studies directed at helping women pregnant with twins to gain weight during the second trimester.