An instructional program for parents helps young children retain the literacy skills and positive learning behaviors acquired in Head Start through to the end of the kindergarten year, according to researchers funded by the National Institutes of Health.

The program appears to offset what education researchers call “summer loss,” or the tendency of children to forget during summer break what they learned during the previous year.

Head Start is a federal program designed to improve school readiness among children living in poverty. In the current study, researchers evaluated the Research Based, Developmentally Informed Parent (REDI-P) program.The problem of summer loss has long been known to affect children of all ages, but it is especially pronounced among children from disadvantaged backgrounds who are just starting school.

The program is centered around home visits from educational counselors, who provide parents with materials, such as books and learning games, and coach them on how to use them. The materials reinforce the social and academic lessons, and preparations for kindergarten that the children learned in the Head Start classroom. 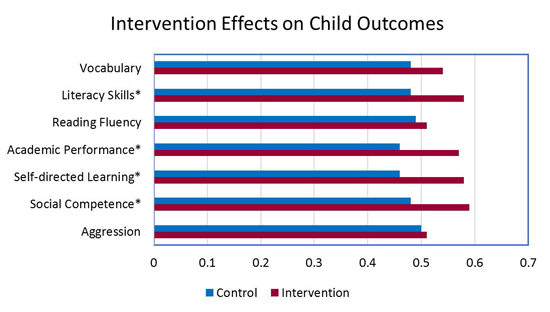 Bar chart showing the difference in scores of academic and social measures in graduates of the REDI-P program in comparison to the control group. Courtesy of Karen L. Bierman, Ph.D., director of the Child Study Center at Penn State University in University Park.

Researchers compared children in REDI-P with a group of similar children who received some educational materials but did not participate in REDI-P.  The children in the REDI-P program showed significantly higher retention of literacy and learning skills and sustained improvements in academic performance and social interaction.

The study, published online in Child Development, was conducted by Karen L. Bierman, Ph.D., director of the Child Study Center at Penn State University in University Park, and colleagues.

“In many cases, school performance in kindergarten sets the pattern for later academic performance,” said James A. Griffin, Ph.D., deputy chief of the Child Development and Behavior Branch at the NIH’s Eunice Kennedy Shriver National Institute of Child Health and Human Development, which funded the study.  “Success—or struggle—in kindergarten often foretells how well children will do in their later academic career. The researchers showed that it’s possible to sustain the skills children acquire in preschool and to help them transition successfully to kindergarten.”

Earlier, the researchers had developed the REDI-P classroom program to promote school readiness and foster literacy skills and social and emotional development among preschoolers. REDI-P seeks to extend children’s preschool gains by increasing the number of home visits for parents and extending them through summer and into the kindergarten year.

To conduct the study, the researchers enrolled 200 children and parents from families with a median yearly income of $18,000. The families were recruited from 24 Head Start centers in urban and rural Pennsylvania counties during the 2008-09 and 2009-10 school years. The researchers randomized 95 children to REDI-P and 105 to the control group.  Control group families were provided with a series of math games to complete on their own. Participants were 55 percent European American, 26 percent African American and 19 percent Latino. Spanish-speaking families were offered materials in Spanish, but opted for the English-language materials instead.

The REDI-P group received 10 home visits in the spring of the children’s Head Start year and six additional sessions during the fall of the kindergarten year. During the visits, parents were offered children’s books with embedded prompts to help them reinforce new information in the text and to engage the children in conversation about what they had read.  Other materials included games and other activities that taught letters of the alphabet and simple words. According to the study, stories in these materials, in addition to the services provided during the Head Start school year, helped children to develop their social skills and learn how to calm down during tense moments, so they could overcome frustration and resolve conflicts. All skills were first taught in the classroom and then reinforced at home. Parents also received monthly activity boxes of play materials. For example, the “playing restaurant” materials included an alphabet soup game for learning letters, menu words and a pad to practice writing by taking orders.

The researchers assessed the children’s skills in the fall of the preschool year and again at the end of kindergarten. The children took standard achievement tests and were rated by teachers. Parents answered questionnaires on their interactions with their children, and observers with the study rated the participants’ parenting skills during the home visits.

By the fall of their kindergarten year, children who participated in Head Start and the REDI-P group scored higher than the children in the control group on several measures, showing greater increases in their vocabulary, literacy skills, reading fluency and academic performance upon entering kindergarten. They also scored higher on two measures of their social skills and ability to function in the more regimented kindergarten classroom: self-directed learning and social competence.

Self-directed learning encompasses the skills needed to sit and listen for longer periods of time.  Children in the REDI-P group were rated higher by their teachers in measures of self-directed learning, such as adhering to rules, working independently and following a teacher’s instructions.

Social competence is a child’s ability to get along with their classmates and manage their feelings. Again, teachers rated REDI-P graduates higher on social competence measures such as sharing, being helpful to others, cooperating and inviting others to play. The REDI-P children also received higher scores in coping with disappointment or frustration, accepting things not going their way and stopping to calm down when frustrated or upset.