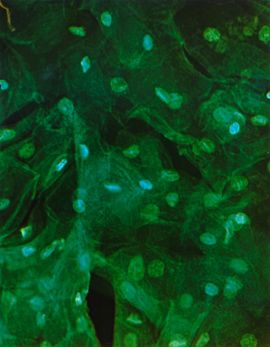 A blood test that detects antibodies to the sexually transmitted bacterium Chlamydia trachomatis may be helpful in screening infertile women for pregnancy outcomes, according to a new study. Infertile women who tested positive for C. trachomatis antibodies were less likely to become pregnant or have a live birth. They also were more likely to experience an ectopic pregnancy. The study, funded by the Eunice Kennedy Shriver National Institute of Child Health and Human Development (NICHD), was published in the journal Fertility and Sterility.

C. trachomatis infections may produce few or no symptoms, and therefore go untreated. But the infection may cause inflammation along the reproductive tract, potentially scarring both the inside and outside of the fallopian tubes and lead to infertility in women. When evaluating women with infertility, clinicians routinely test whether the fallopian tubes are open (“patent” tubes) or if they are blocked, which may result from a number of causes. Blocked tubes can prevent a fertilized egg from reaching the uterus, increasing the risk of ectopic pregnancy (a pregnancy that implants outside of the uterus).

However, clinicians questioned the utility of testing for C. trachomatis infection, especially in women with patent tubes. Researchers funded by NICHD’s Reproductive Medicine Network, which carries out clinical trials on interventions for infertility and reproductive diseases, looked for possible links between C. trachomatis and pregnancy outcomes in infertile women with patent tubes.

Researchers screened samples from more than 1,200 infertile women who did not have an active chlamydial infection and had at least one patent (open) fallopian tube. The team looked at three specific outcomes—conception, ectopic pregnancy, and live birth—following treatment with fertility medication and in some cases, intrauterine insemination, where sperm is placed directly inside the uterus.

Importantly, the team used a non-commercial blood test, called the EB ELISA, to detect two antibodies that indicate a prior or ongoing C. trachomatis infection. While there is a commercially available blood test, it also recognizes other types of Chlamydia, leading to false positive results. The researchers associated a positive EB test for one of the antibodies (called IgG3) with a lower chance of conceiving or having a live birth and with a higher chance of ectopic pregnancy.

The findings open new avenues for understanding the causes of infertility and identifying pregnancy risks in women. The study authors suspect that an undiagnosed C. trachomatis infection may reduce the health of fallopian tubes despite a normal appearance, thereby reducing the likelihood of conception.  Therefore, the authors suggest that screening for additional forms of tubal damage, not just for blockage, may prove useful when C. trachomatis antibodies are detected. The authors also called for a more accurate, commercially available test for this infection.