National Institutes of Health grantee William E. Moerner of Stanford University in California shares the 2014 Nobel Prize in chemistry for his work on optical microscopy that has opened the understanding of molecules by allowing researchers to see how the molecules work close up. 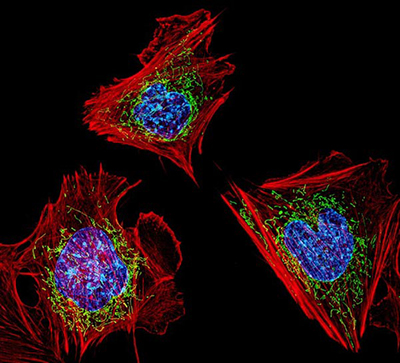 The cells shown here are fibroblasts, one of the most common cells in mammalian connective tissue. These particular cells were taken from a mouse. Scientists used them to test the power of a new microscopy technique that offers vivid views of the inside of a cell. The DNA within the nucleus (blue), mitochondria (green) and cellular skeleton (red) is clearly visible. (Credit: Dylan Burnette and Jennifer Lippincott-Schwartz, Eunice Kennedy Shriver National Institute of Child Health and Human Development, National Institutes of Health)

The Royal Swedish Academy of Sciences, which selected the laureates, said that, because of the achievements of these researchers in overcoming the limitations of the traditional light microscope, “the optical microscope can now peer into the nanoworld.”

“Because of this revolutionary work, scientists can now visualize the pathways of individual molecules inside living cells,” said NIH Director Francis S. Collins, M.D., Ph.D. “Researchers can see how molecules create synapses between nerve cells in the brain, and they can track proteins involved in Parkinson’s, Alzheimer’s and Huntington’s diseases. NIH is proud to have supported this work, which is now used worldwide."

Since 2003, Dr. Moerner has received more than $10 million in support from the National Institute of General Medical Sciences and the National Human Genome Research Institute. He was among the first to receive grants from NIH cellular imaging initiatives that encouraged the application of physical science tools and approaches to biological studies.

“These achievements were truly pioneering,” said Catherine Lewis, Ph.D., director of the Division of Cell Biology and Biophysics at NIGMS. “The scientists accomplished something that was thought to be impossible—seeing single molecules in living cells in real time. This has opened a window into the cell and paved the way for an explosion of research on the role of individual molecules in health and disease.”

The first working model of Dr. Betzig's microscope was built in a laboratory at the Eunice Kennedy Shriver National Institute of Child Health and Human Development (NICHD), at a time when Betzig was between jobs and working out of a cottage in rural Michigan.

NIH Distinguished Investigator Jennifer Lippincott-Schwartz, Ph.D., who leads the NICHD Section on Organelle Biology, was captivated by Betzig's concept for an optical microscope that could beat the so-called diffraction limit of 0.2 micrometers, the theoretical maximum resolution of traditional optical microscopy.

Betzig had developed the theoretical basis, but he had neither access to the green fluorescent proteins needed for the experiment nor a laboratory in which to build a microscope.

Lippincott-Schwartz hosted Betzig and his colleague, Harald Hess, Ph.D., in her NIH lab, where together they constructed a working prototype of the microscope as a proof of concept. The result was Photo-Activated Localization Microscopy, or (PALM,, which scientists now use to study dynamic protein interactions within cells in real time and space.

"We didn't imagine at the time how quickly the point localization imaging would become such an amazing enabling technology; but it caught on like wildfire, expanding throughout many fields of biology," said Lippincott-Schwartz.

The Office of the Director, the central office at NIH, is responsible for setting policy for NIH, which includes 27 Institutes and Centers. This involves planning, managing, and coordinating the programs and activities of all NIH components. The Office of the Director also includes program offices which are responsible for stimulating specific areas of research throughout NIH. Additional information is available at http://www.nih.gov/icd/od.

About the National Institutes of Health (NIH): NIH, the nation’s medical research agency, includes 27 Institutes and Centers and is a component of the U.S. Department of Health and Human Services. NIH is the primary federal agency conducting and supporting basic, clinical, and translational medical research, and is investigating the causes, treatments, and cures for both common and rare diseases. For more information about NIH and its programs, visit http://www.nih.gov.