Current standards for ultrasound evaluation of fetal growth may lead to misclassification of up to 15 percent of fetuses of minority mothers as being too small, according to a study by researchers at the National Institutes of Health (NIH) and other institutions.

Fetal growth restriction is a medical term used to describe fetuses that do not keep up with growth milestones appropriate to their stage of development. Growth restriction is a sign of an underlying health problem, often resulting from the fetus not receiving enough nutrients or oxygen in the uterus. 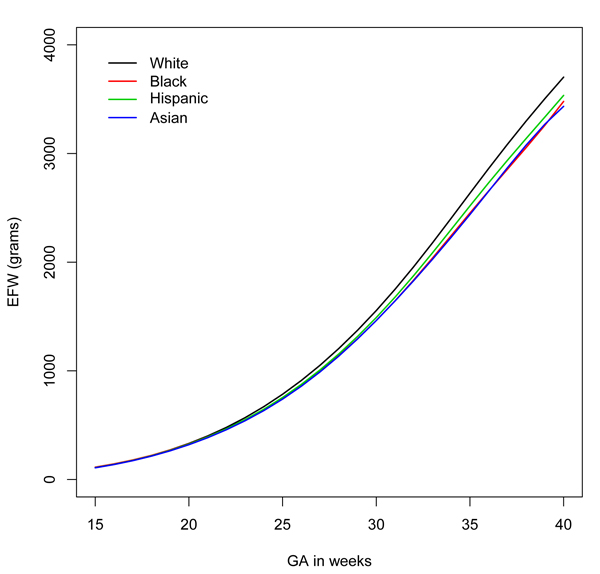 Chart depicting average growth trajectories for the White, Black, Hispanic, and Asian fetuses who took part in the study. Image courtesy of the National Institutes of Health.

According to the latest study, however, many fetuses of minority mothers may be developing normally, but because of hereditary and environmental factors, they are smaller than their white counterparts. The findings could mean that many otherwise healthy pregnant women are subjected to tests and procedures that they don’t need.

“Doctors like to be proactive—if they suspect there’s a problem with a fetus’ growth, then they’re likely going to order tests and investigate,” said the study’s first author, Germaine Buck Louis, Ph.D, Director of the Division of Intramural Population Health Research at NIH’s Eunice Kennedy Shriver National Institute of Child Health and Human Development (NICHD). “But inaccurate standards may be leading women to receive unnecessary tests—not to mention the stress of thinking something may be wrong—when their pregnancies actually are on track.”

The study, based on serial scans of more than 1,700 pregnancies, was published online in the American Journal of Obstetrics and Gynecology.

Ultrasonic examination during pregnancy—in which sound waves are used to create an image of the developing fetus—is a routine test to make sure a pregnancy is proceeding normally. The test can detect multiple pregnancies, problems with the placenta or fetal heart, or whether the fetus is growing too slowly. The latter condition, often referred to as fetal, or intrauterine, growth restriction, could signal such pregnancy problems as maternal high blood pressure, failure of the placenta to deliver enough blood, or fetal heart disease.  According to Dr. Buck Louis, it can sometimes be difficult to distinguish a growth-restricted fetus from a fetus growing normally.

“It’s the same as with children—some fetuses are just naturally small for their age,” she said.

After they’re born, growth-restricted infants are referred to as small for gestational age if their weights are below a predetermined cut-off, say the 5th or 10th percentile. Growth restricted infants are at increased risk for serious health problems, such as diabetes, heart disease and death.

Currently, many practitioners rely on older reference charts for estimating whether a fetus is growing normally. During a sonogram, measurements are taken of the fetus’ head circumference, abdominal circumference and length of the femur (thigh bone). These measurements are used in a formula to estimate the weight of the fetus, which is then compared to a series of estimated weights on a chart of fetal weight stratified by gestational age. The growth chart weights were derived from a study by Frank Hadlock and his colleagues, who compiled ultrasound measurements of 139 pregnancies of predominantly middle-class white women during the 1980s.

Today, the current study authors wrote, new mothers tend to be older, heavier, and more likely to be non-white than when the Hadlock entries were compiled. The researchers sought to compile standards that more accurately reflect the best fetal growth during healthy pregnancies among the most common racial and ethnic groups in the United States. They began by enrolling 2,334 women, aged 18 to 40 years, at 12 hospitals in the United States. The women identified themselves as non-Hispanic white, non-Hispanic black, Hispanic and Asian. The researchers sought only healthy pregnancies so that they could image fetuses whose growth was unaffected by pregnancy-related illness and conditions. Women with such pregnancy-related complications eventually were not included in the standards. Of the 1,737 women with low-risk pregnancies remaining, 26 percent were white, 26 percent black, 28 percent Hispanic, and 20 percent Asian.

The researchers assigned each woman at random to one of four groups. The women in each group underwent a total of five sonograms, at intervals from the 16th through the 41st week of pregnancy. The researchers averaged the measurements from all the images to compile a sequence of estimated fetal weights—a growth chart that could be used to gauge whether a fetus was growing at an acceptable or unacceptable rate.

The researchers found significant differences among fetuses in the different groups after the 20th week of pregnancy. For example, by the 39th week, fetuses of white mothers were the largest at 4402 grams, followed by fetuses of Hispanic mothers (4226 grams). Fetuses of black mothers were the smallest, at 4053 grams.