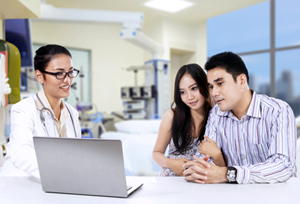 Treatment with clomiphene, a standard therapy for couples with unexplained infertility, results in more live births than treatment with a potential alternative, letrozole, according to a study of more than 900 couples conducted by a National Institutes of Health research network.

The study authors undertook the comparison because earlier findings had suggested that letrozole might achieve as many live births as other treatments, but result in fewer multiple pregnancies.  Moreover, a 2014 study by the same network found that letrozole was more effective than clomiphene for achieving pregnancy in women with another infertility disorder, polycystic ovary syndrome.  The study appears in the New England Journal of Medicine.

The study’s first author was Michael P. Diamond, M.D. of the Department of Obstetrics and Gynecology, Georgia Regents University in Augusta.

Unexplained infertility is said to occur when a couple cannot conceive, even though the female ovulates normally, has no obvious abnormalities in the reproductive tract, and the male is producing an adequate number of motile sperm. The most common treatment involves using drugs to stimulate the woman’s ovaries to release an egg, and inserting her partner’s sperm directly into the uterus (intrauterine insemination). In vitro fertilization is an option, the study authors write, but is less commonly offered as the procedure is expensive and many health insurance plans don’t provide coverage for it.

Both letrozole and clomiphene stimulate the ovary to release eggs, but by slightly different means. Clomiphene prevents estrogen from binding to cells and triggers the pituitary to signal the release of the egg. Letrozole prevents estrogen from being produced, thereby influencing the brain’s hypothalamus and the pituitary to trigger an egg’s release. Many fertility specialists also offer treatment with gonadotropins, substances produced by the pituitary and which cause the ovary to release an egg. Treatment with gonadotropins has declined in recent years, Dr. Eisenberg said, because of concerns that their use could lead to an increased risk for multiple pregnancies.  Multiple pregnancy increases the chance that the infants will need to be delivered by cesarean section, and that the infants will be born prematurely, which is a risk factor for infant death and disability.

The Assessment of Multiple Intrauterine Gestations from Ovarian Stimulation clinical trial was conducted at 12 locations throughout the United States, by researchers in the NICHD Cooperative Reproductive Medicine Network.

The 900 women who took part in the study were randomly assigned to three groups of approximately 300 each for treatment with either letrozole, clomiphene, or gonadotropins. All  women were between  18 and  40 years of age. The women received the drugs for up to four monthly menstrual cycles or until they became pregnant or discontinued treatment.

Because gonadotropins resulted in the most multiple pregnancies of the three treatments, and letrozole resulted in the fewest conceptions and lowest pregnancy rates, the study authors concluded that clomiphene citrate is the most appropriate means to stimulate ovulation in unexplained infertility treated with intrauterine insemination. Among the three groups, there were no statistical differences in birth defects or complications with pregnancy or birth.