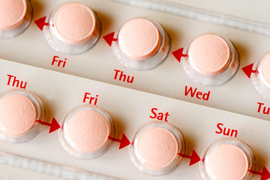 Elizabeth Waibel: Obese young women may be less likely to use birth control than their normal-weight peers, placing them at greater risk for unintended pregnancy, according to researchers funded by the National Institutes of Health.

University of Michigan researchers surveyed 900 heterosexual 18- to 19-year-old women. Each week, the women completed a survey in which they reported on relationships, including information about their sexual activity and contraceptive use. The women also provided their height and body weight, and the researchers used this information to calculate the women’s body mass index, or BMI, which is an indicator of possible overweight or obesity.

Both normal-weight and obese women reported having roughly the same number of sexual partners and frequency of intercourse. However, the obese women were significantly less likely to use contraception and to use it consistently.

Adolescent pregnancy in the United States is one of the highest in the developed world. Teen pregnancies are more likely to end in miscarriage, stillbirth, and newborn death, and teen mothers are also more likely to live in poverty and raise their children in poverty than are older mothers.

Speaking with me today is Dr. Tammy Chang, the study’s first author. She is an assistant professor of family medicine at the University of Michigan.

So, thank you so much for joining us, Dr. Chang.

Dr. Tammy Chang: Thank you so much for having me.

Ms. Waibel: Why did you decide to focus on women who are obese, particularly women in this 18- to 19-year-old range?

Dr. Chang: So, as a family physician that takes care of a lot of adolescents, it’s vitally important to me to know who might be at increased risk for unintended pregnancy, and we know that 18- to 19-year-old adolescents are at the highest risk, and so, that’s why we wanted to look at this group.

In terms of obese adolescents, we were really interested in understanding whether weight status—so, whether you’re normal weight, overweight, or obese—made you behave differently as an adolescent in regards to sexual behaviors.

Dr. Chang: It was surprising to me to see that there were these differences. There’s studies that show that some adolescents might—some obese adolescents might have more sex, or have less sex; however, there’s no concrete evidence about how they use contraception. And so, that’s something that we wanted to focus on in the study. And what we found was that in our study of almost a thousand 18- to 19-year-old adolescent women, that sexually active obese adolescents were significantly less likely to use any contraception, compared to their normal-weight peers.

Ms. Waibel: And you said there was a significant difference in contraceptive use. How big a difference was this?

Ms. Waibel: That is quite a big difference.

And do you have any idea of why these young women who are obese are less likely to use contraception than some of their peers?

Dr. Chang: You know, that’s a really good question. Our study really wasn’t designed to look at the “why.” It was more to understand whether there was a difference.

Ms. Waibel: Is there anything in particular that you think doctors who see women in this age group can take away from your study?

Ms. Waibel: Interesting. And I think— I’m trying to remember if it was something that I read in your study or somewhere else, but I think obesity can also make pregnancy more difficult or dangerous, in some cases. Is that correct?

Dr. Chang: Absolutely. Obese women who become pregnant have a higher risk for a lot of poor outcomes, for example gestational diabetes, having high blood pressure, blood clots, C-sections. There’s a lot of things that put obese women at risk. And so, that’s just another added reason why we want to understand this difference among obese adolescents and normal-weight adolescents.

Ms. Waibel: We hear a lot about teen pregnancy and why it’s a concern, but I think a lot of the focus is often on, you know, girls who are 15, 16, maybe still in high school. Why is teen pregnancy still a concern for 18- and 19-year-olds?

Dr. Chang: That’s a really good question. You know, when you look across the board at the prevalences of teen pregnancy, compared to 15- and 16-year-olds, 18- and 19-year-old adolescents have a much higher rate of unintended pregnancy. And so we consider them at higher risk than other age groups. And so we wanted to focus on this really high-risk group.

Dr. Chang: All adolescents should be given the knowledge, resources, and a sense of empowerment to ask their physician or someone who can help them, to help them make healthy decisions. That’s something that I wish for all adolescents, you know, 18, 19, 15, 16—any age group.

That’s something that really depends a lot more than on just the physician, or even a family physician. I know, as a family physician, we work really hard to meet adolescents where they’re at. But sometimes there could be a lot of things going on, and adolescents having the sense that they can ask, the comfort with their doctor to do that, having parents and family members who can also support them in making healthy decisions, I think that’s vital in this age group.

Ms. Waibel: Well, thanks so much. Is there anything else that you’d like to add before we— before we conclude?

Interestingly, there were no differences in other sexual behaviors. So, we didn’t find any difference between normal-weight and obese adolescents when we looked at, for example, the number of partners, how often they had sex, or length of relationships.

Dr. Chang: That’s exactly right. And, as we all know, it only really takes one time without contraception for a teen to become pregnant. So, any difference is significant, is clinically significant to us, and we want to start to understand that more.

Ms. Waibel: Great. Okay. Well, thank you so much for speaking with me, Dr. Chang. I really appreciate it.

Ms. Waibel: I’ve been speaking with Dr. Tammy Chang, co-author of the study, “Sexual Behavior and Contraceptive Use among 18- to 19-year-old Adolescent Women by Weight Status: A Longitudinal Analysis.” The article was published July 1 in the journal Pediatrics.