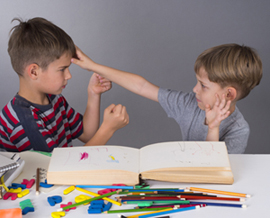 A diet high in fat and sugar during pregnancy may interact with a gene that controls early brain development in the fetus, potentially increasing the risk for attention deficit hyperactive disorder (ADHD) in some individuals, according to a study funded by the National Institutes of Health.

The study by researchers at King's College London and the University of Bristol found that children who had conduct problems from an early age were more likely to have ADHD if they had changes to the gene for IGF2 (insulin-like growth factor 2) when they were born.

The change—the addition of a chemical compound known as a methyl group—was more likely to occur in children whose mothers ate a high fat, high sugar diet during pregnancy. Once attached to DNA, methyl groups function as an off switch, silencing the DNA so that its instructions are not carried out. A high fat, high sugar diet has been shown to increase methylation of the IGF2 gene. IGF2 controls development of the cerebellum and hippocampus—brain structures thought to be affected in ADHD. The finding raises the possibility that epigenetic changes to a gene—change to a gene's functioning, but not its structure—could result from environmental influences, such as a mother's diet.

The researchers studied children with persistent conduct problems, also called conduct disorder. Children with conduct disorder persistently engage in defiant behavior, often breaking rules repeatedly. They also are more likely than other children to get involved in criminal activity. Children who develop persistent conduct problems early in life also are more likely develop ADHD than other children, the researchers noted. ADHD is a brain disorder marked by a pattern of inattention, hyperactivity, and impulsive behavior.

Researchers analyzed data from the Avon Longitudinal Study of Parents and Children, which followed more than 14,000 children born in Bristol, England, from birth to the present to understand how the environment interacts with genes to affect health, behavior, and human development. From this sample, the researchers identified 164 youth with early onset, persistent conduct problems (EOP) and 81 youth with a low incidence of conduct problems. Biological samples were collected from all the youth at birth and again at age 7. Similarly, mothers responded to questionnaires on what they ate when they were 32 weeks pregnant and what their children ate at ages 3, 4 1/2, and 7.

The IGF2 gene has different functions at different phases of development. High methylation of the gene during fetal life might predispose certain individuals—such as those who exhibit conduct disorder—to developADHD, but have no bearing on ADHD if the methylation occurs at a later stage of development. The researchers added that if the findings are verified, altering diet and other factors that influence methylation may reduce the risk for ADHD as well as any other conditions susceptible to epigenetic influences.