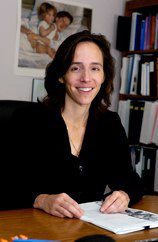 Dr. Spong’s career spans over 20 years of outstanding medical and clinical research accomplishments and contributions, and she is a recognized national and international expert in the field of maternal and fetal medicine and obstetrics and gynecology," said Dr. Guttmacher. As a physician-scientist she has made seminal contributions both to our scientific understanding and to the health and well-being of countless individuals around the globe.

In 1996, Dr. Spong became a member of the NICHD Division of Intramural Research and led the Unit on Perinatal and Developmental Neurobiology from 2004-2013. She joined the NICHD’s Pregnancy and Perinatology Branch in January 2000 and was appointed branch chief in 2001. She has received numerous awards and much recognition for her outstanding work, including the Society for Maternal-Fetal Medicine Achievement Award and her alma mater’s Alumni of the Year award in 2012. In 2012, the Society for Clinical Trials selected the NICHD-sponsored Management of Myelomeningocele Study (MOMS), of which Dr. Spong is a co-author, as its Trial of the Year.

Dr. Spong is a three-time recipient of the NIH Director’s Award: in 2004 for advancing research in maternal-fetal medicine in 2012 for MOMS, and this year (PDF - 600 KB) for her participation in NIH efforts on developing clear guidance for human subject protection in research studies.

Dr. Spong received her M.D. from the University of Missouri–Kansas City in 1991 and was chief resident in obstetrics and gynecology at the Harbor–UCLA Center prior to joining the NICHD. In addition to being a prolific author of numerous scientific publications and textbooks, she has served as an editor of leading scientific journals. She is board certified in Ob/Gyn and maternal fetal medicine and serves as a maternal-fetal medicine specialist for the NIH Clinical Center and for INOVA Alexandria Hospital.