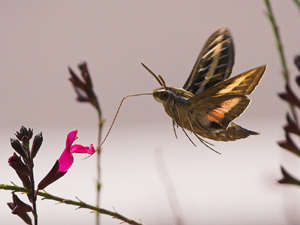 Ever wonder why regular and diet soda taste so different? Both are sweet, but new research from the National Institutes of Health (NIH) may explain how you can tell one from another. The study, published in the September 1 issue of the Journal of Neuroscience, shows for the first time that the moth brain can detect and interpret thousands of individual tastes, not just broad categories of taste as was previously thought.

In humans and other vertebrates, the sense of taste begins in the mouth, where taste buds on the tongue and soft palate contain receptor cells that signal the brain. The moth initially detects tastes in a way similar to humans. In place of a tongue, the moth tastes with its proboscis, a drinking straw-like organ covered with taste cells.

It has been thought that these receptor cells alert the brain only to a few categories of taste: sweet, salty, bitter, sour and umami (the Japanese word for savory). But the new study in moths shows that these receptor cells signal the presence of specific chemicals, enabling the brain to interpret them as different tastes. As in humans, these cells express multiple receptors sensitive to different sets of chemicals. They create an electrical code to inform the brain about what chemicals are present.

Stopfer's team, led by Brown University graduate student Sam Reiter, gave moths precisely controlled drops of tastes while recording the electrical responses of taste receptor cells. The moths were given several chemicals associated with basic taste categories: "sweet" solutions of sucrose, glucose and maltose and "salty" solutions of sodium chloride and lithium chloride. The researchers were able to decipher the electrical patterns generated by the moth's receptor cells. They found that the cells encode individual chemicals, rather than whole categories of basic tastes.

Many scientists believe that human receptor cells send signals deep into the brain through a chain of cells called 'labeled lines.' Each labeled line was thought to be dedicated to a single basic taste, but Stopfer's team suggests that the brain may use a different method for signaling tastes. By directly recording from connected nerve cells, Stopfer's team found that the cells work together as a network and the network's patterns of activity identifies each chemical. This turns out to be a very efficient way to allow the brain to detect and interpret vast numbers of tastes quickly and accurately.

This study establishes that the premise of detecting tastes as four or five basic categories is inaccurate. We can potentially detect thousands of individual tastes. It also describes the complex brain activity involved in taste processing. According to Dr. Stopfer, this study may provide important clues into how the human brain detects, interprets and experiences taste.