Yaffe began his tenure as director of the NICHD’s Center for Research for Mothers and Children in 1980, a position he held until his retirement 20 years later. His research career focused on the role of drug metabolizing enzymes in nutrition and drug metabolism in the developing fetus, bilirubin metabolism, and the secretion of drugs in breast milk. He wrote or co-wrote numerous scientific articles and several books. Two of his works are considered landmark pharmacological references, Drugs in Lactation (with Gerald G. Briggs and Roger K. Freeman) and Pediatric Pharmacology (with Jacob V. Aranda). 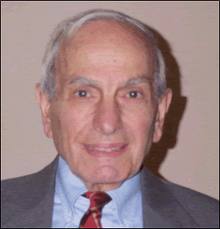 “Sumner Yaffe was a good friend to his NICHD colleagues and a patient mentor to many young scientists and administrators,” said NICHD Director Alan E. Guttmacher, M.D. “His knowledge of pediatric pharmacology was instrumental in establishing a research network that met the crucial need for the thorough evaluation of drugs before they are used in children.”

Under Yaffe’s leadership, the Center for Research for Mothers and Children established the Pediatric Pharmacology Research Units Network in 1994. The network’s mission was to conduct studies of how drugs, previously approved for use in adults, affect children. Because of their smaller size and faster metabolism than adults, and because they are still developing, children may react differently to many drugs than do adults. Similarly, children may require different doses of a drug than do adults, even when their smaller size is taken into consideration. The network provided a research infrastructure for the clinical trials needed to conduct the necessary testing for drugs to ensure their suitability in children.

Dr. Yaffee was born in Boston, Mass., and attended Harvard College before leaving to serve in the Armed Forces during World War II. After his military service, he returned to Harvard to earn a BA in chemistry, and later, an MA in Pharmacology. He received his MD degree from the University of Vermont, and completed his training in pediatrics at Children’s Hospital in Boston. In 1963, he was appointed professor of Pediatrics at the State University of New York in Buffalo. In 1975, he moved to the Children’s Hospital of Philadelphia, where he established the Division of Pediatric Clinical Pharmacology.

In addition to the Pediatric Pharmacology Research Units Network, his tenure also saw the establishment of the NICHD’s Neonatal Research Network and Maternal Fetal Medicine Network. After his retirement from the NICHD, Yaffe remained active, serving as an advisor to the Institute, and in collaborative efforts with pediatric researchers.