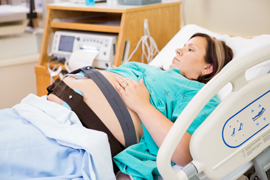 A new technology that tracks the electrical activity of the fetal heart offers no advantages over conventional technology in preventing birth complications, according to a new study by the National Institutes of Health.

The technology provides electrocardiogram (ECG) readings of a fetus’s heart during the birth process. An ECG records the heart’s electrical activity—the signal that spreads from the top of the heart to the bottom, causing the heart to contract and pump blood. ECGs are typically used to detect abnormal heart rates, heart attacks, and other heart problems, but they are not commonly used to monitor fetuses in the United States. Traditionally, physicians have monitored only the fetal heart rate, the pace at which the heart is beating, during labor.

The new technology is referred to as fetal ST segment analysis, named for the ST interval— the time after a heartbeat, when the heart cannot contract again until the heart cells recover from the electrical impulse that triggered the beat. The idea behind fetal ECG ST monitoring was that additional information about the heart would alert delivery room staff earlier than would heart rate monitoring alone, allowing them to intervene earlier to prevent potential complications.

“The study authors compared a number of outcomes—fetal and newborn death, seizures, and cesarean delivery—and found no significant differences,” said Uma Reddy, M.D., medical officer at NIH’s Eunice Kennedy Shriver National Institute of Child Health and Human Development (NICHD), which operates the research network that conducted the study. Dr. Reddy added that the investigators saw no difference between the groups, whether they considered potential outcomes individually or all together in a primary (combined) outcome.

The study was conducted by researchers in the NICHD Maternal-Fetal Medicine Units Network, which conducts studies on birth, delivery, and newborn medicine. For the study, more than 11,000 pregnant women were assigned to one of two groups when they went into labor after the 36th week of pregnancy. Physicians delivering women in the first, or open, group received readings from both the ECG ST monitors and fetal heart rate monitors. In the second, or masked, group, attending physicians saw only the fetal heart rate readings.

For each of the groups, the researchers recorded the occurrences of birth complications such as fetal and newborn death, seizures, the need for a ventilator after birth, high levels of acid in the blood, or an Apgar score of 3 or less. The Apgar test is performed shortly after birth to check the newborn for heart or breathing problems. The occurrence of one or more of these complications was included in the primary outcome.

The researchers also tracked outcomes among the mothers, such as cesarean delivery, the use of forceps or vacuum to assist with vaginal delivery, infection of the membranes enclosing the amniotic fluid, and the need for a blood transfusion.

Adverse events occurred for 52 patients in the open arm and 40 in the masked arm, a difference that was not statistically significant. Infants in the open group were slightly more likely to have an Apgar score of 3 or less (0.31 percent) than were those in the masked group (0.11 percent).  Among the mothers, the researchers saw no differences in the frequency of any adverse events.

“Even though a new treatment or technology may appear promising, it really isn’t possible to know whether it provides any benefits unless it’s tested in a research study,” Dr. Reddy said.  “Our study didn’t find any benefit for ECG ST monitoring in term births.”