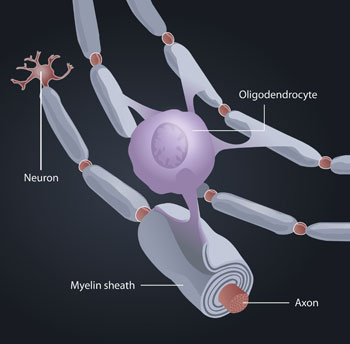 Electrical signals transmitted from one neuron to the next are a basic form of communication in the brain. These signals travel along projections, called axons, which extend from neurons. Oligodendrocytes wrap axons in an insulating material, called myelin, that speeds up the electrical signals. The myelination process is essential for normal nervous system function and it may contribute to learning and skill development. In this study, NIH researchers found a trigger for the myelination process. When electrical signals travel down an axon, the axon releases a molecule called glutamate. Glutamate stimulates the oligodendrocyte to form a point of contact with the axon through which it receives axon signals. The oligodendrocytes then begin wrapping the myelin covering around the axons.

Researchers at the National Institutes of Health have discovered in mice a molecular trigger that initiates myelination, the process by which brain cell networks are reinforced with an insulating material called myelin that speeds their ability to transmit messages.

The myelination process is an essential part of brain development. Myelin formation is necessary for brain cells to communicate and it may contribute to development of skills and learning.

The researchers showed that an electrical signal passing through a brain cell (neuron) results in the brain cell releasing the molecule glutamate. Glutamate, in turn, triggers another type of brain cell, called an oligodendrocyte, to form a point of contact with the neuron. Signals transmitted through this contact point stimulate the oligodendrocyte to make myelin protein and begin the process of myelination. In this process, the oligodendrocyte wraps myelin around axons— the long, cable-like projections that extend from each neuron. The myelination process is analogous to wrapping electrical tape around bare wires.

Electrical signals transmitted from one neuron to the next are a basic form of communication in the brain. The myelin layers that oligodendrocytes wrap around neurons boost these signals so that they travel 50 times faster than before.

“Insulation begins to form on axons in the late stages of fetal development, but the process continues through childhood, adolescence, and into early adulthood,” said Dr. Fields, the study’s senior author. “For example, infants cannot hold up their heads or walk until the appropriate motor axons become myelinated, and the frontal lobes of the brain, responsible for judgment and higher-level complex reasoning, are not fully myelinated until the early twenties.”

Understanding how oligodendrocytes generate and help repair myelin could provide insight into how only the appropriate axons in the brain become insulated during development as people acquire skills, with the eventual goal of helping them do so more efficiently, Dr. Fields explained. Similarly, understanding the myelination process could lead to insights into disorders like multiple sclerosis, in which myelin is either damaged or destroyed. Moreover, understanding myelination may allow researchers to speed myelination— and repair— of axons recovering from injury.

In a separate culture of neurons and oligodendrocytes, the researchers blocked the release of the molecule glutamate, a neurotransmitter. Neurotransmitters make it possible for signals to pass between cells. When glutamate release was blocked, very little myelin coating formed. Further experiments showed that after the electrical pulses and the release of glutamate, nerve cells and the neighboring oligodendrocytes began sending chemical signals back and forth. Then the oligodendrocytes started to make the protein used to form the myelin sheath. Specifically, receptors on the cell membrane of oligodendrocytes detect glutamate released by the axon, and this triggers the formation of what the researchers termed specialized adhesive signaling junctions—points of contact between oligodendrocytes and axons that enable signals to be passed between the cells. Then the oligodentrocytes began depositing myelin on electrically active axons, but not on axons that were not electrically active.

“This shows that axons that are transmitting electrical signals will become preferentially insulated by myelin,” Dr. Fields said.

In a previous study, Dr. Fields and his coauthors found that electrical activity in neurons stimulates other cells, called astrocytes, that also are involved in the myelination process.