Study Could Lead to New Therapies for Epilepsy, Depression

Barrett Whitener: Epilepsy, schizophrenia, and depression—these are some of the major neurological disorders, affecting countless numbers of people around the world. Scientists who seek to discover what causes these disorders study many aspects of the nervous system, including the receptors or protein molecules on the surface of nerve cells. These receptors modulate the signals sent throughout the brain’s intricate network of connecting nerve fibers. If the receptors fail to function properly, problems with learning and memory can result; sometimes leading to the diseases and conditions I mentioned and others as well.

A new study has succeeded in creating detailed images of one group of receptors—the glutamate receptors—and this discovery may lead to therapies for these and other diseases and conditions.

From the National Institutes of Health, I’m Barrett Whitener. This is Research Developments, a podcast from the NIH’s Eunice Kennedy Shriver National Institute of Child Health and Human Development, the NICHD. With me today is one of the study’s authors, Mark Mayer. The study was funded in part by the NICHD.

Thank you for joining us today, Dr. Mayer.

Mr. Whitener: Dr. Mayer, can you first tell us a little bit more about why the glutamate receptors are so important to the functioning of the nervous system and how they’re implicated in the development of problems such as schizophrenia and depression? 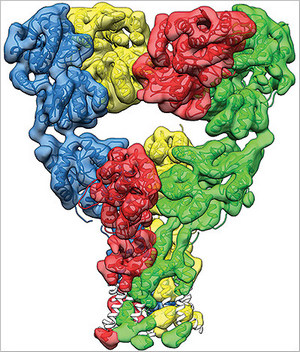 Dr. Mayer: So glutamate receptors are of great importance to normal function of the brain because they mediate information transfer between cells. So nerve cells in the brain communicate with each other via specialized junctions we call synapses and at these junctions, an electrical signal in the upstream neuron signals the release of the amino acid glutamate and this then activates glutamate receptors in the post-synaptic cell, which in turn excites the downstream cell.

Glutamate does this by binding to specialized proteins called glutamate receptor ion channels and the binding of glutamates to these opens the ion channel, generating an electrical signal. So there is a continuous inter-conversion of electrical and chemical signals during normal conversation between cells in the brain. Without glutamate receptor activation, the brain becomes silent: we have no thoughts, no initiation of movement, no vision or hearing. They’re very important molecules.

Now, during development and in the healthy adult brain, the expression of glutamate receptors is very tightly regulated. There are not just one receptor; there are numerous sub-types with different properties, which fine-tune excitatory signaling. Dysfunction of these receptors—either over activity or reduced activity—can trigger disease. So, for example, in stroke, excess ion flux through glutamate receptors triggers nerve cell death. On the other hand in schizophrenia, there’s a loss of balance during communication between different parts of the brain. And very strikingly, it was discovered many years ago that drugs that blocked the activity of some types of glutamate receptors produced severe behavioral side effects which resembled some psychiatric diseases.

So, in a nutshell, they’re very important molecules to basic function and there’s growing evidence of when things go wrong with them, bad things happen.

Mr. Whitener: I mentioned a minute ago that your work has discovered or created some detailed images of one group of receptors. What are some of the challenges to imaging receptors and how did those challenges influence the way you conducted the study?

Dr. Mayer: It was a difficult project. So, working with my colleague, Sriram Subramaniam, who is a structural biologist in NCI [the National Cancer Institute], we used a specialized technique called cryo-electron microscopy [cryo-EM] to solve the structures of glutamate receptors in their resting, active, and inactivated states. To do this, we had to express and purify the receptors using cell cultures, and typically we only obtain about one milligram of protein from 12 liters of cell cultures. We then used some drugs whose mechanism of action was previously understood to stabilize the receptors in different states.

And then this is how the imaging actually works. We put the protein on a microscope grid and blot off the excess so only a thin film of liquid, much less than 100 nanometers thick, was left. The grid is then quickly frozen in liquid nitrogen and it is very important at this stage that no ice crystals form—just a glass-like layer of frozen water with individual protein molecules embedded in the water. The grids are then imaged at high magnification under high vacuum with an electron microscope running at about 300 kilovolts.

And then the images of individual protein molecules are barely visible by eye, but by averaging tens of thousands of them, it’s possible to get an electron density map, which shows the shape of the molecule. It sounds straightforward, but it’s not. Every step is challenging. The huge advantage of this step, which is different from solving structures by x-ray diffraction using protein crystals, is that the molecules are free to assume their native shapes and they’re not trapped in a single confirmation as occurs in a crystal lattice. So, that’s why we went to the cryo-EM technique.

Mr. Whitener: Is a good analogy, it’s almost like taking a photograph of the receptor at different phases of the process?

Mr. Whitener: And taking those photographs is very challenging?

Mr. Whitener: And so, as a result of the imaging, what did you find?

Dr. Mayer: Well, with perfect protein preparations, perfect imaging conditions, and enough images, it’s possible to get a sufficiently high resolution to see all of the structural elements that build up a protein molecule, with helices and sheets of amino acids. So glutamate receptors we’re not there yet but our structures give us a very good view of how the receptor change is shaped during the process of activation and subsequent inactivation. So, the receptor is composed of four sub-units, each of which contains a ligand binding domain that binds glutamates. At rest we found that the receptor has a Y shape, with the ion channel at the bottom and the ligand binding domain in the middle arranged as a dimer or dimers.

What we found in the glutamate-bound confirmation was that the receptor contracts, the ligand binding domain undergoes a corkscrew-like motion which pulls on them and opens the ion channel. In the desensitized or inactive state, we found that the ligand binding domain undergoes a radical change, assuming a four-fold symmetry, with a shape like an inverted pyramid. In this state the receptor expands again and the channel is closed. Due to the intense interest in glutamate receptors, many people had made guesses about what these changes would look like. We were very surprised that our structures reveal a completely unanticipated and novel rearrangement for the inactive state.

Mr. Whitener: Now that you’ve gotten the images of the glutamate receptors in the various phases of their involvement in conducting nerve signals, what’s your next step?

Dr. Mayer: Well, our goal for the future is to keep pushing for higher resolution, because understanding the details of how molecules work is key to applying this knowledge. For example—I’m going to step outside of biology for a moment—at low resolution, a blurry image would reveal that the nail and screw are both long, rod-shaped devices. With higher resolution, we can see that the nail has a pointed tip and a flattened end; while the screw has helical grooves and a slotted top. With that information we could design appropriate tools. The screwdriver would not be a good tool to use with a nail and likewise a hammer would do a poor job on a screw. We know this because we now have high resolution structures of a nail and screw.

Mr. Whitener: How do you envision progress unfolding from this point toward therapies for the nervous system disorders and conditions I mentioned earlier?

Dr. Mayer: So, the human body is an immense molecular jigsaw puzzle. One molecule interacts with its neighbors and when bits are missing or damaged, the puzzle is no good. The body is just the same. All the bits are interlinked and when parts get damaged or lost, things break down. The goal with structural biology is that by understanding how molecules work and what goes wrong in disease, we can fix or prevent bad things from happening. Today we’ve only scratched the surface of this incredibly complex pattern and every day scientists doing basic biomedical research make discoveries that reveal completely unanticipated results.

This makes it very challenging to do translational research with a high success rate because our knowledge of how the body works is still very incomplete. Every day we learn a little bit more, but my guess is that there remains an immense amount to be discovered by biomedical research, which will dwarf our current body of knowledge. I think in 200 or 300 years’ time or perhaps longer, our current body of knowledge will look very primitive if we don’t continue to do basic biomedical research.

Mr. Whitener: I’ve been speaking with Dr. Mark Mayer, co-author of the study, “Molecular Mechanism Identified for Activation and Desensitization of Prominent Neurotransmitter Receptor in the Brain,” published recently in the journal Nature. Thank you so much for speaking with me today, Dr. Mayer.

Dr. Mayer: It’s been a pleasure.