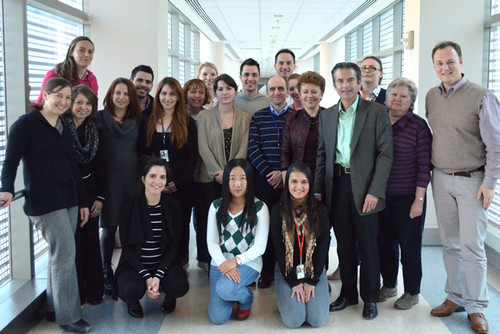 NICHD’s Dr. Constantine Stratakis (fourth from r) and his colleagues

Clinical Center researchers have identified the genetic defect underlying the disease for the first admitted patient at the Hatfield Clinical Research Center.

The patient has Carney complex, a rare genetic disorder that affects 700 people. People with Carney complex often have skin pigmented spots resembling freckles, over-active endocrine glands that produce too many hormones and a number of different types of benign and cancerous tumors.

The patient was enrolled in a research protocol of Dr. Constantine Stratakis, director of the Division of Intramural Research and head of the section on genetics and endocrinology at NICHD. He said the discovery of the new defect will provide the basis for efforts to screen patients with Carney complex with similar defects. Ultimately, he hopes that discovery of the defect will lead to effective treatments for Carney complex.

“There are hundreds of ongoing studies just like this one at the Clinical Center,” said CC director Dr. John Gallin. “In understanding rare diseases, we not only are in a position to help those who have the diseases, but often we identify new gene or protein targets for the discovery of new therapeutics relevant to common diseases. Thus, in addition to providing hope to the patients with the rare disease we often can apply what we learn to a variety of other diseases and conditions as well.”

On Apr. 3, 2005, the first patient admitted to the CRC enrolled in Stratakis’s protocol. Then, Stratakis thought the patient had Carney complex, but lacking a definitive test, he couldn’t confirm the suspected diagnosis. However, he continued to follow the patient’s progress through the years at the Clinical Center.

“Nine years ago, we didn’t have the technology to identify the disease’s genetic defect,” Stratakis said. “As technology advanced, we were able to find it. Patients we thought didn’t have [Carney complex] turned out to actually have it. It’s amazing how far genetic technology has come.”

In 1994, Stratakis set up a program at the CC to study patients with adrenal and pituitary tumors. This research led him to study Carney complex or suspected Carney complex, a genetic syndrome that affects both the pituitary and the adrenal glands. Since then, he estimates he’s diagnosed the condition in 400 to 500 patients.

Including the gene for the first patient at the CRC, so far he’s identified three genetic defects resulting in Carney complex and at least two others that may contribute to the disease’s development, at least with regard to adrenal tumors. Stratakis’s laboratory has identified several other genetic defects that cause pituitary or adrenal tumors in patients with other conditions such as multiple endocrine neoplasias, cancer, gastric stromal tumors, pheochromocytomas or paragangliomas.

“I’m confident that understanding the genetic basis of the Carney complex will lead to a treatment that targets the cause of the disease,” Stratakis said. “Just because we don’t have a treatment yet doesn’t mean we won’t find it in the days, months and years ahead.”