Barrett Whitener: Getting an adolescent with diabetes to look after a living animal, specifically a pet fish, may also encourage them to take better care of their diabetes, according to a study of youth with type 1 diabetes, funded in part by the National Institutes of Health. 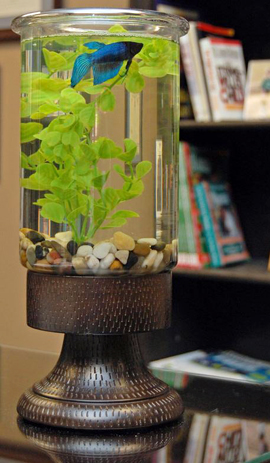 Study authors tested whether caring for a live fish might also lead youth with type 1 diabetes to take better care of their disorder. –Stock Photo.

Sometimes it’s difficult to get adolescents to take diabetes seriously, for reasons we’ll look at in a moment. This can lead to parent/child power struggles that could be serious for teens with type 1 diabetes whose bodies produce no insulin of their own. These teens need to check their blood sugar level regularly to make sure it stays within the normal range. Over time, high blood sugar levels can damage nerves, blood vessels, and organs. If blood sugar suddenly drops too low, it could lead to fainting, seizure, and even death.

Often mental health professionals need to be called in to resolve family conflicts and get a teen’s diabetes care routine back on track. Our guest today, Dr. Olga Gupta, thought it might be possible to sidestep these family power struggles. Dr. Gupta is the senior author of the study and assistant professor of pediatrics and internal medicine at the University of Texas Southwestern.

She reasoned that adolescents might take better care of themselves if they were also entrusted with the care of another living creature. Dr. Gupta and her colleagues provided 28 adolescents with a live Betta splendens, also called a “Siamese fighting fish.”

Olga Gupta, M.D.: Thank you for having me, Barrett.

Mr. Whitener: First of all, let’s look at why adolescents can have a hard time managing their diabetes. What are some of the reasons for that?

Dr. Gupta: Well, any of us who have teenagers at home, or have spent a lot of time with teenagers, know that adolescence is a particularly vulnerable time for deterioration of glucose control, and that’s due to poor decision-making, impulsivity, and a sense of instability invincibility that characterizes this time period and can negatively affect the care of the diabetes. And it’s also characterized by a real desire for independence and autonomy. And all of these factors together are just a perfect storm for teenagers with type 1 diabetes.

Mr. Whitener: So partly it’s that they want to conform, as all teenagers do, and kind of are afraid of being different from their peers and so might, in some cases, skip the frequent blood sugar checks that they need because of that?

Dr. Gupta: Absolutely. And around the same time, the responsibility for the tasks related to the diabetes typically shifts from the caregiver or the parent to the child. And lots of times they’re just not ready for that type of responsibility.

Mr. Whitener: What gave you the idea that taking care of a pet might help adolescents do a better job of managing their type 1 diabetes?

Dr. Gupta: Well, we know from other studies that pets can ease anxiety, provide emotional support, and really encourage a sense of responsibility, autonomy, and competence in adults and in children. And, you know, it could be because pet care just provides that structure and that routine that children and people need. And it was fortuitous that around that time that we had this thought, a request for an application came out from the NICHD looking at the role of human/animal interaction in child health and development. So that was the perfect opportunity for us to take this hypothesis and really test it in a group of kids.

Mr. Whitener: And why specifically did you choose a fish for the pet that the adolescents would be asked to take care of?

Dr. Gupta: Yeah, we chose a fish just to ease the burden of costs and care of the pet, you know, on the families. We thought that if we gave them a cat or a dog, that really wouldn’t be appropriate, and that that would really change their household dynamic and would provide a lot of extra cost for them.

Mr. Whitener: Now, I should probably note that the species that you chose, the Betta splendens, is fairly easy to take care of and they’re native to the shallow swamps and rice paddies of Asia, so they don’t require a lot of filtration or a lot of oxygen. So they’re really—as fish go—they’re especially good for this kind of study. Is that correct?

Dr. Gupta: Yes, they are very hardy and inexpensive fish.

Mr. Whitener: Could you tell us a little bit more about how you conducted the study?

Dr. Gupta: Yes, so we approached the teenagers who had not reached their glucose targets, according to the American Diabetes Association, and so they had some room for improvement. And we randomized them either to an actual fish or a picture of a fish. And we gave them instructions to feed their fish in the morning when they wake up, and in the evening before bed, and at that time to check their glucose, and to change a quarter of the water out in the bowl, and at that time to review their glucose logs with one of their parents.

Mr. Whitener: And what specifically did you find?

Dr. Gupta: Well, we found that the participants who received the fish had a statistically significant improvement in their hemoglobin A1C, which is a reflection of their average glucose over the past 3 months. And it decreased by 0.5 percentage points—as compared with their peers, who just received the picture of the fish, and they had an increase of 0.8 percentage points.

Mr. Whitener: That sounds pretty significant. Was it in fact something you would regard as significant?

Dr. Gupta: Yes. An improvement of that magnitude, if it persists, can diminish their risk of long-term complications, including kidney disease or heart disease or damage to their nerves.

Mr. Whitener: How surprised were you by the results?

Dr. Gupta: I was surprised that they could demonstrate such a significant improvement over just 3 months.

Dr. Gupta: They did. The younger teenagers had an improvement of 1.5 percentage points, so that’s a very big change. And I think that’s due to the fact that younger teenagers, you know, they’re still trying to follow the rules, and they’re still listening to their parents and open to suggestions from parents. And I think that it’s their interest in caring for a living creature, as well as listening to their parents, contributed to their improvement in the glucose control, compared with older teenagers who really just want independence from parents and a greater reliance on their peer groups.

Mr. Whitener: Can you talk a little bit about what specifically you think it is about caring for a fish that might lead a teen to take better care of his or her own health?

Mr. Whitener: This was a small study to test if the idea would work. And now that you have a good idea that it most definitely will work, what kinds of studies are you planning for the future?

Dr. Gupta: There’s always the possibility that the intervention won’t be sustainable after a short time period, like 3 months. So we’d like to do another study with a larger cohort of teenagers for a longer time period and really carefully document important variables—including how frequently they check their glucose, who’s actually taking care of the pet, and include strategies to keep them engaged in the study for a longer time period.

Mr. Whitener: I’ve been speaking with Dr. Olga Gupta, senior author of the paper, “A Novel Behavioral Intervention in Adolescents with Type 1 Diabetes Mellitus Improves Glycemic Control: Preliminary Results From a Pilot Randomized Control Trial.” The study was published in the journal, The Diabetes Educator. It’s been a pleasure speaking with you, Doctor.

Dr. Gupta: Thank you for having me, Barrett.