Zinc 'Sparks' Fly from Egg within Minutes of Fertilization

At fertilization, a massive release of the metal zinc appears to set the fertilized egg cell on the path to dividing and growing into an embryo, according to the results of animal studies supported by the National Institutes of Health.

Recent findings suggest a major role for zinc in reproduction. In observations from egg cells of monkeys and mice, the researchers found that massive intake of zinc can put a brake on cell division as the egg matures and awaits fertilization (A). Fertilization of the egg (B) triggers cyclical changes in the levels of calcium in the cell (C). It also generates zinc sparks (D), or bursts of zinc from the cell that seem to lift the brake on development and set the fertilized egg on the path to dividing and growing into an embryo.

The zinc discharge follows the egg cell's steady accumulation of zinc atoms in the developmental stages before fertilization. The researchers documented the discharge by bathing the eggs in a solution that gives off light when exposed to zinc.  They referred to the zinc discharge and accompanying light flash as zinc sparks.

"The discovery of egg cells' massive intake and later release of zinc defines a new role for this element in biology," said Louis DePaolo, chief of the Reproductive Sciences Branch at the Eunice Kennedy Shriver National Institute of Child Health and Human Development (NICHD), one of the NIH institutes supporting the study. "We anticipate the findings will one day lead to information useful for the treatment of infertility as well as the development of new ways to prevent fertilization from occurring."

The study's authors suggest that zinc acts as a switch, turning off the process of cell division while the egg matures and turning it on again after fertilization.

"These findings suggest zinc is essential for developing a healthy egg and, ultimately, a healthy embryo," said Teresa Woodruff, Ph.D., one of the article's senior authors.

Their findings appear in the July issue of ACS Chemical Biology. 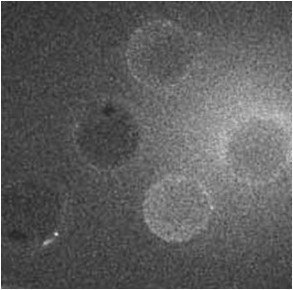 Figure 1. A still image from the video accompanying the article "Zinc Sparks Are Triggered by Fertilization and Facilitate Cell Cycle Resumption in Mammalian Eggs," DOI: 10.1021/cb200084y. The image shows the light flare that occurs with the release of zinc from fertilized mouse eggs.

In this study, the researchers observed egg cells from mice and from monkeys. To conduct the study, they devised a microscope that would allow them to view the concentration and distribution of zinc atoms in individual cells. With the aid of the chemical that gives off light when exposed to zinc, the researchers documented the first zinc sparks 20 minutes after fertilization. Most fertilized eggs released two or three rounds of sparks, but the researchers saw as few as one and as many as five within the first two hours after fertilization.  The sparks flared every 10 minutes, on average.

Previous research had shown that fertilization triggers cyclical changes in the level of calcium in the egg cell.  The researchers noted that the zinc sparks always occurred after a peak in calcium levels inside the cell.

"The number, timing and intensity of these sparks could tell us something important about the quality of the egg and will be an important area for future research," said Dr. O'Halloran, the article's other senior author. "It's may also be worth investigating whether the amount of zinc in a woman's diet plays a role in fertility."

Additional experiments helped confirm a role for zinc in the fertilization process.  Typically, once the egg is released from the ovary, it must get rid of excess chromosomes in two stages as it prepares to fuse with the sperm. The team's earlier research showed that the early accumulation of zinc is essential for properly completing the first stage, Dr. O'Halloran explained. The latest results suggest that zinc may act as a brake in between these stages, as the egg awaits fertilization. If the cell is fertilized, the zinc release appears to lift the brake. The cell discards its excess genetic material and begins to divide.

The researchers also showed that even unfertilized eggs would start to divide if zinc levels were artificially reduced, mimicking release. In addition, when fertilized cells were forced to take on additional zinc, the process was reversed.

"We have shown that zinc appears to regulate this precisely calibrated, intricate process," Dr. Woodruff said. "The findings give us new insights into what these cells need to grow and mature properly."