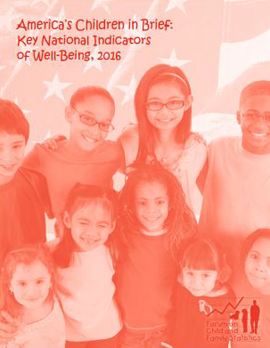 The teen birth rate dropped for another consecutive year, continuing a long-term decline in teen pregnancy, according to the most recent yearly report on the status of America’s children and youth.

According to the 2016 edition of America’s Children: Key National Indicators of Well-Being, in 2014, the adolescent birth rate was 11 births per 1,000 girls ages 15 to 17 years, down from 12 per 1,000 in 2013. Racial and ethnic disparities in adolescent birth rates also have declined, although substantial differences persist.

The annual report is published by the Federal Interagency Forum on Child and Family Statistics, a working group of 23 federal agencies that collect, analyze and report data on conditions and trends related to child and family well-being. The report tracks 41 indicators of child well-being, using statistics from federal researchers.

This year’s report is the 18th in an ongoing series and presents key indicators of children’s well-being in seven domains: family and social environment, economic circumstances, health care, physical environment and safety, behavior, education and health.

In the behavior domain, the percentages of 10th- and 12th-graders in all racial and ethnic groups who binge drink—have five or more alcoholic beverages in a row on a single occasion—were the lowest in 2015 since the survey began tracking this statistic in 1980. Among 12th-graders, Hispanic and white non-Hispanic students reported binge drinking at twice the rate of black non-Hispanic students.

In the education domain, overall math scores declined slightly for fourth and eighth graders. However, some progress has been made in narrowing the achievement gap or the differences in average scores for different racial and ethnic groups. For example, the difference in math scores for white and black fourth graders has narrowed from 32 points in 1990 to 24 points in 2015.

Other statistics in the 2016 report include:

The full report is available on the forum’s website, at www.childstats.gov.

About the Eunice Kennedy Shriver National Institute of Child Health and Human Development (NICHD): The NICHD sponsors research on development, before and after birth; maternal, child and family health; reproductive biology and population issues; and medical rehabilitation. For more information, visit the Institute’s website at www.nichd.nih.gov/.

About the National Institutes of Health (NIH): The NIH, the nation's medical research agency, includes 27 Institutes and Centers and is a component of the U.S. Department of Health and Human Services. The NIH is the primary federal agency conducting and supporting basic, clinical and translational medical research, and is investigating the causes, treatments and cures for both common and rare diseases. For more information about the NIH and its programs, visit www.nih.gov.